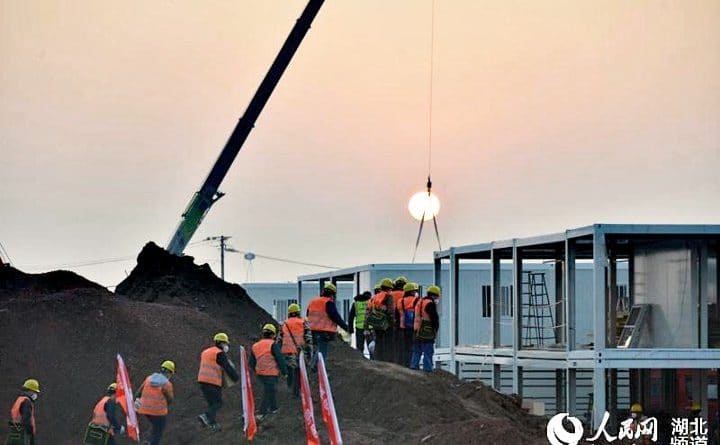 A newly discovered coronavirus in China has infected nearly 14,500 people over a period of weeks, and as of Feb. 2 there have been more than 300 fatalities. The disease was discovered in Wuhan, the largest city in Hubei Province.

Similar to the SARS virus outbreak that hit China in 2003-2004, it is believed to have originated in bats, traveled to an intermediate animal — as yet unknown — and then transmitted to humans. There are a handful of reported cases of human to human transmission outside of China. The virus presents symptoms similar to influenza, and can lead to pneumonia, which has generally been the cause of death.

The outbreak happened during the Spring Festival, when millions of people are traveling in celebration of the Lunar New Year. This contributed to its rapid transmission.

Outside of China, it was fear that spread in epidemic proportions and has been promoted by the Western capitalist press. There have been instances of anti-Asian racism; a U.S. stock market dive has been blamed on the effects of the coronavirus outbreak; major airlines have cancelled flights in and out of China; travelers returning from or near Wuhan have been quarantined; and many businesses from outside of China have closed their operations there.

The symptoms of the viral infection are relatively mild compared to the SARS virus and other outbreaks. The fatality rate, between 2 percent and 2.5 percent, is relatively low. For perspective and comparison, many experts cite the death toll of 650,000 from this year’s flu season, which is not yet over. That toll is not out of the ordinary for annual flu outbreaks.

Nearly all of the coronavirus fatalities have been of people whose health was compromised by advanced age or pre-existing health conditions. This, however, doesn’t mean that the outbreak is not a crisis. Chinese officials, medical professionals and scientists have declared war on the virus. Health care workers from across China have mobilized to go to Wuhan and other hard-hit areas.

Travel to and from all of the cities in the province of Hubei, where Wuhan is located, is shut down. More than 50 million residents are effectively on lock down. Travel inside the cities is discouraged and people are asked to stay at home.

According to the journal Nature, there are concerns that the virus could become endemic, meaning that it circulates continuously, as does influenza or chicken pox. It is still unknown whether or not infected but asymptomatic people can spread the virus, which would compound the risk that the virus represents.

And so, regardless of how mild the symptoms are, and the fact that nearly all people recover, the Chinese authorities have taken extraordinary steps. First and foremost, the objective is to contain the coronavirus and minimize loss of life, and then to research the makeup of the virus.

When the World Health Organization (WHO) declared the outbreak to be a global emergency on Jan. 31, Director-General Dr. Tedros Adhanom Ghebreyesus told reporters: “This declaration is not a vote of no confidence in China. On the contrary, WHO continues to have confidence in China’s capacity to control the outbreak. … Our greatest concern is the potential for this virus to spread to countries with weaker health systems.”

An Associated Press article also acknowledged the remarkable efforts by China: “Chinese authorities are striving to keep 50 million people in cities at the center of the outbreak both isolated and fed in the biggest anti-disease effort ever attempted. Few governments could attempt such drastic restrictions on a population bigger than South Korea’s or Australia’s.”

China opened its first hospital dedicated exclusively to the coronavirus in a city near Wuhan. The building had been completed but was vacant. Incredibly, in 48 hours, a team of 500 people, many of them volunteers, worked around the clock loading medical equipment, installing electricity, communications equipment and the internet, and readied the hospital for a full medical staff to begin working.

At least three other hospitals are being constructed and will be running by the first week of February, using prefabricated steel boxes similar to shipping containers that can be stacked. The boxes are pre-wired and can be converted into operational hospitals almost immediately.

The Global Times reported Feb. 2, “With more than 1,000 beds, the Huoshenshan Hospital finished its nonstop construction on Sunday. The hospital is managed by the People’s Liberation of Army. It will receive patients starting Monday.”

Workers in a factory that produces facemasks have also stepped up to help alleviate a shortage of medical masks that people wear all over China to protect themselves and others from infection. They, too, are working around the clock and their wages have been quadrupled.

In a remarkable breakthrough, just ten days after the virus was identified, Chinese scientists figured out the DNA sequence and sent it electronically to health agencies all over the world so that study could be global.

In the Science section of the Washington Post, reporter Carolyn Johnson wrote: “That precious bit of data, freely available to any researcher who wanted to study it, unleashed a massive collaborative effort to understand the mysterious new pathogen.”

Postdoctoral fellow at Rocky Mountain Laboratories, Michael Letko, said, “The speed and openness of the scientific response to the coronavirus has been unprecedented. … This is one of the first times we’re getting to see an outbreak of a new virus and have the scientific community sharing their data almost in real time.”

It is the socialist foundation of China’s economic and social system, the legacy of the 1949 revolution, that made these accomplishments possible.

Speaking at a Communist Party leadership meeting, President Xi Jinping said that his country was “faced with the grave situation of an accelerating spread of the new coronavirus,” but that the country would “definitely be able to win the battle,” according to state media.