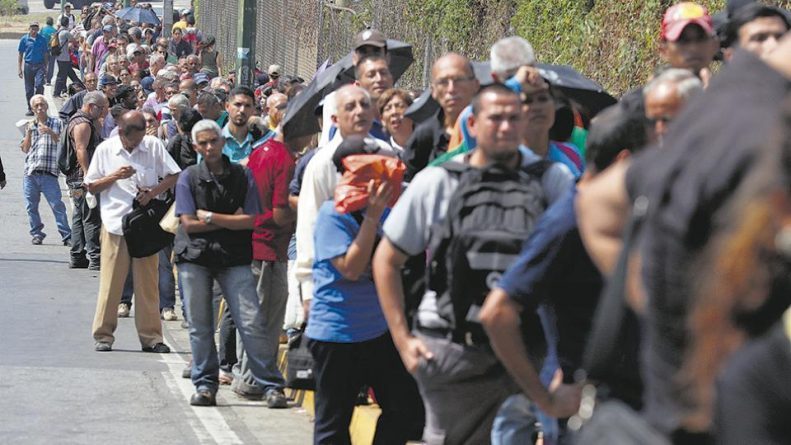 Venezuelans show signs of individual and collective efforts in the face of power and water cuts. The government will implement a plan for 30 days.
By Marco Teruggi

02/Mar/2019.- Nicolás Maduro announced a special electricity plan for thirty days, “a special regime of power rationing that will allow the balancing of the national electrical system”. He affirmed Sunday night, after a week marked by successive blackouts that put a large part of the population in a situation of severe hardship to solve everyday problems, in particular one: water. And yesterday the president described the situation as a serious emergency.

“This plan will have special emphasis on not affecting the energy needed to ensure the supply of drinking water,” he said in the announcement. He also stated that school activities will continue to be suspended until today and that working days will end at 2:00 pm, both in public and private institutions. Maduro named Igor Gavidia León as the new energy minister to replace retired General Luis Motta Domínguez.

The communication minister, Jorge Rodríguez, said that the government is facing “multiform attacks on the electricity system”, which caused “considerable damage in the transmission yard of the Simón Bolívar hydroelectric plant in Guri, and in the network of transmission lines, as well as in the connection and automation processes of the operation of the generating machines in the generation process and in the distribution of the electric current”. The picture is complex, and the answers will not be immediate.

The predominant images of Sunday and yesterday were of people with water containers looking for a way to fill them. In stores selling water, fillers (where they fill the water trucks), springs at the foot of the hill bordering the Caracas valley, upstream -where many people went to take a bath- in improvised water outlets in tunnels, barrios, broken pipes to solve the crisis. The fight for water was permanent, the capacity of the government’s cisterns operations could not cope with the demand’s dimension. Yesterday afternoon water supply gradually was restored in several parts of the capital and its vicinity.

The capital, as well as several parts of the country, was converted into a scenario of individual, family, and collective efforts to resolve the needs of both water and transport. The government of the mayor of Caracas enabled special routes in view of the difficulty of mobility due to lack of metro service, and organized operational routes of groups of motorized Chavistas to take people to their homes.

In that context protests were seen on Sunday afternoon and yesterday. Some were promoted by the opposition, to prevent for example the passage of tanker trucks sent by the government and create greater difficulty to capitalize politically through violent scenarios. It is a method used in other opportunities, such as in 2017 and in particular in 2016, where the tactic was to generate pockets of protest in the vicinity of the Miraflores Palace without assuming responsibility, thus creating an attempt at popular uprising amplified through work in social networks.

Others were instead a spontaneous response to the situation of real difficulty caused by the prolonged lack of water that, unlike light, has not returned in several areas in recent days. Every day without water translates into a greater number of difficulties.

RELATED CONTENT: Why is the Electric Sabotage a Terrorist Act?

Guaidó for his part maintained the narrative that the blackouts would be the product of corruption, a fire caused by lack of maintenance and the inability to resolve it in an organized  way by “block, sector, neighborhood”, and pronounced a conclusion that resides mainly in the order of wishful thinking and propaganda: “The myth is over, the legend, that the poor sectors once backed them”, he said.

He ratified his call for the mobilization on April 6, called it a”simulation of Operation Freedom”, an action which so far no one has described, but announced that “commandos of support and freedom” will be created. He also asked the Bolivarian National Armed Forces to stand on his side, and affirmed that the arrival of US Marines is a possibility.

Yesterday, the decision of the Full Chamber of the Supreme Court of Justice was also heard, which decided to ratify the prohibition of Guaidó leaving the country without authorization until the completion of the investigation initiated on January 29, the prohibition to alienate and encumber the assets of its property ends, the blocking and immobilization of bank accounts or any other financial instrument in Venezuelan territory (see separately). The Chamber also issued a fine of 200 tax units due to the contempt of the order prohibiting the exit, and ordered a certified copy of the decision be sent to the president of the ANC “for the purpose of the lifting of parliamentary immunity in his capacity as deputy to the AN”.

There are then several scenarios at the same time that Venezuela lives. Those who mark the daily routine of material difficulties and the search for their resolution, those that have to do with Guaidó’s attempts to resume a political initiative that has been falling, those of the government to give answers in each of the plans, the more urgent matters, as well as the ever-present threat due to the scheme of the assault on power posed by the opposition. And behind it, or as Chancellor Jorge Arreaza said, in frontof it: the United States.

The daily routine thus resembles a tense rope, very tense, which nevertheless does not seem close to breaking.