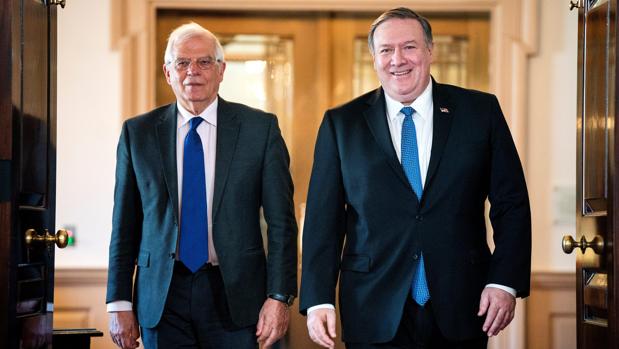 Editorial Note The Orinoco Tribune does not have ABC on the list of favorite sources but this piece is relevant, especially because it exposes US blackmail towards European Countries but also because it doesn’t say a single word about US corporations still doing businesses in the Venezuelan oil sector.

The US Secretary of State, Mike Pompeo, has asked Josep Borrell directly to intercede so that the Spanish oil companies operating in Venezuela desist from doing business with the Nicolás Maduro regime, as confirmed by the Spanish Foreign Minister on his departure from a meeting between both at the headquarters of the United States diplomatic service in Washington.

“There are Spanish oil companies that I will not mention by name, that are maintaining a certain activity and to the extent that this activity may pose a problem with respect to the sanctions regime that the Americans have established, of course we have talked about this issue, ” Borrell said in response to a question about whether he had proof that Spanish oil companies have received pressure from the United States.

Of the 94 Spanish companies registered on April 1 before the Venezuelan Spanish Chamber of Industry and Commerce, only Repsol is listed under the “services related to natural resources” industrial sector.

The meeting between the two ministers has focused mainly on Venezuela, although they have also talked about Cuba. In the US’s bull’s eye is Repsol, which extracts crude oil from Venezuela as payment for debt that the regime has contracted with it, lacking liquid money. In October, Repsol obtained two shipments of Venezuelan oil to be refined in Spain, according to the company itself at the time. Until now, the regime had sent the crude to be refined abroad.

In February, however, the US government applied a series of harsh sanctions that entail an embargo on the importation of crude oil extracted by the Venezuelan state oil company, PDVSA, by refineries in the United States. These exports accounted for up to 70% of the liquid money received by the regime, which has now requested aid from Russia to be able to refine oil within Venezuela. Last week, the Kremlin sent Maduro the necessary chemicals for it in two freighters.

Last week, the US special representative for Venezuela, Elliott Abrams, revealed that he has had conversations with what he described as “oil companies and foreign governments, reminding them that they should support the president in charge Guaidó and not the regime. Therefore, they should not buy oil from the regime and thus give it cash. ” Asked about it, Abrams refused to reveal which companies were contacted and if there were Spaniards among them.

Apart from acknowledging that they have spoken about Spanish companies, Borrell has not revealed whether he has committed to do any management on behalf of the US government. The Spanish minister has played down the importance of the arrival of 100 Russian soldiers to Venezuela – he has questioned whether it is a true “military presence” – and has insisted that the Spanish and European position is for elections to be held in Venezuela in the near future.