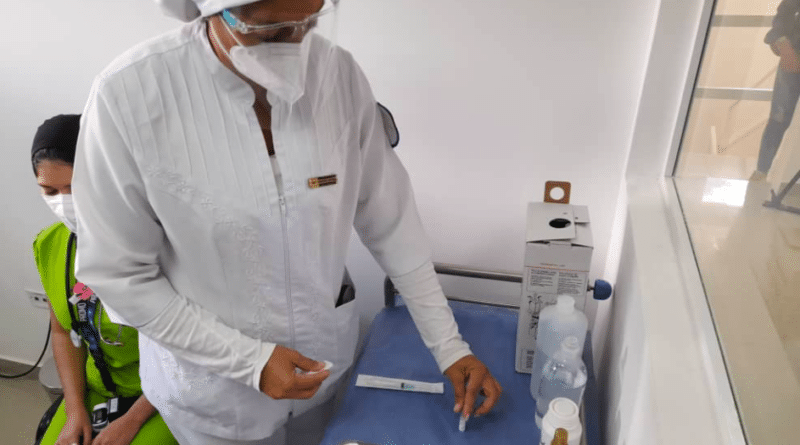 Venezuela signed an agreement with Russian pharmaceutical company Geropharm to acquire a shipment of 10 million doses of the Russian COVID-19 vaccine EpiVacCorona for the Bolivarian nation.

The agreement was signed within the framework of the Saint Petersburg International Economic Forum (SPIEF) by the Venezuelan Health Minister, Carlos Humberto Alvarado González; the Venezuelan Minister for Science and Technology, Gabriela Jiménez; and the Russian Minister of Trade and Industry, Denis Manturov.

”On June 4, within the framework of the Saint Petersburg Economic Forum, the Geropharm company and the Government of Venezuela signed an agreement in regard to the supply of the EpiVacCorona vaccine,” stated a Geropharm press release.

EpivacCorona in Venezuela
On March 30, President Nicolás Maduro had announced the beginning of clinical trials with the Russian EpivacCorona formula in Venezuela, thus highlighting the progress of the Russia-Venezuela High Level Intergovernmental Commission (CIAN).

Likewise, that very same day, the Minister of Science and Technology, Gabriela Jiménez, informed about the reception of an allotment of EpiVacCorona vaccines for the trials in Venezuela. Jiménez added that ”this vaccine is based on a technology of synthetic peptide antigens, which makes it possible to stimulate the most able antibodies in those that have been vaccinated.”

Consequently, on May 4, clinical trials of EpiVacCorona officially started in Venezuela. The Russian Ambassador in Venezuela, Sergey Melik-Bagdasarov, was the first volunteer to receive the first dose of this vaccine.

Last week, Venezuela received 500,000 doses of Sputnik V. As reported by the Venezuelan government, until now, seven shipments of Russian vaccines have been received by the country.