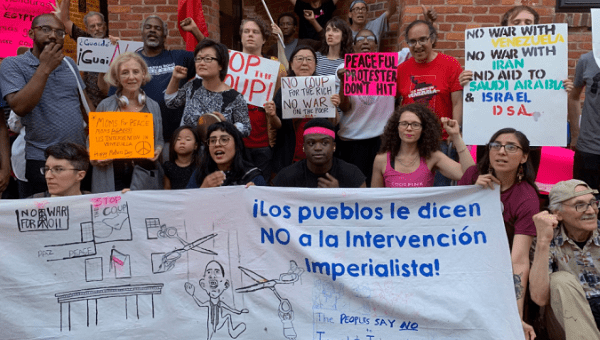 International News
May 12, 2019 orinocotribune Colectivos, Defending the Embassy in DC, embassy small lab for US aggression, Solidarity, unconventional war in DC, US Imperialism

After several weeks of protecting the Venezuelan embassy in D.C., the ‘U.S. government’ has shut off the water to try to ‘smoke out’ Maduro supporters: CODEPINK.

After the water was suddenly shut off in the Venezuelan embassy in the United States located in Washington, D.C. Saturday morning, CODEPINK activists are being stopped by local police from bringing in food to those inside.

Electricity inside the building was shut off despite all bills being up to date May 8. CODEPINK co-founder, Medea Benjamin, tweeted Saturday morning the water had also just been shut off.

“BREAKING NEWS: The US govt turned off water at Venezuela Embassy this morning to try to force the #EmbassyProtctionCollective to leave. No lights, no water, little food. Come show support. 1pm 1099 30th St NW DC. Join us in saying No Coup. No US Intervention #HandsOffVenezeula” tweeted the human rights leader whose organization also advocates to free Palestine.​​

Benjamin added in a followup tweet: “Now the US govt has turned off the water in the Venezuela Embassy to smoke us out. No lights, no water, little food. This is how Big Brother tries to crush other countries as well. We remain firm. Send love to #embassyprotectioncollective #HandsOffVenezeula.”

CODEPINK and its supporters have been allowed into the embassy building located in Washington, D.C. by the Nicolas Maduro government in order to protect the diplomatic territory from being taken over by U.S. and Venezuelan opposition members who want to allow the self-proclaimed interim president of Venezuela, Juan Guiado, and his appointees onto the premises.

Venezuelans calling for a US military invasion should study a little history first. US invasions bring death, destruction and mayhem in their wake—often for decades. Negotiations, not war!!!

The group had already planned a rally outside the embassy in continued support of Maduro and to denounce the U.S.’s continued threats to use military force to overthrow the president.

By Saturday afternoon, teleSUR correspondent in the U.S., Alina R. Duarte, tweeted video of D.C. police and opposition protesters blocking Venezuelan government supporters from bringing food to those who have been inside for weeks and are running out of food and provisions.

The police openly working with the Venezuelan opposition blocking the access of food to the Embassy.

Pro-Guiado protesters outside of the embassy became violent this week when they injured pro-Maduro supporters. One human rights leader was arrested by local police for throwing bread into the windows of the building for the activists inside.

The embassy building’s electricity was shut off Wednesday without explanation. Carlos Vecchio, a part of the U.S. envoy that has several times tried to overthrow President Nicolas Maduro and install Guaido, described the move as “a small victory.”