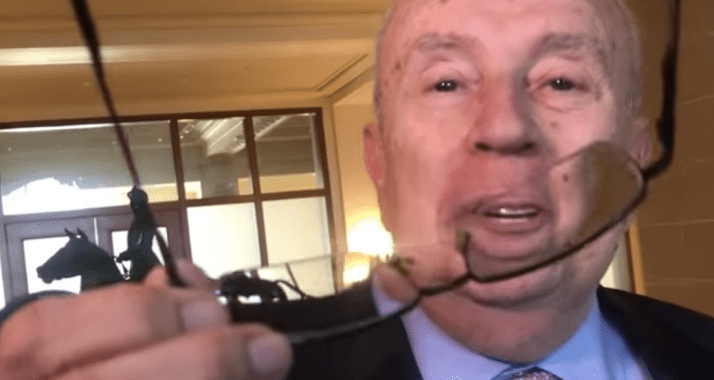 At the OAS, two top representatives of Juan Guaido’s US-backed shadow government – Gustavo Tarre and David Smolansky – lost their cool when confronted with critical questions. Both recently attended a closed-door DC meeting on a US military assault.
By Anya Parampil

On April 23, the Venezuelan lawyer and opposition activist Gustavo Tarre stood outside the Simon Bolivar room inside the Organization of American States (OAS) in Washington DC and fielded friendly questions from reporters.

It was a rare day of celebration for the Venezuelan opposition, which had been deprived of concrete victories since launching their coup with US backing in January. Having just been installed with as Venezuela’s “ambassador” at the OAS, Tarre controlled little more than the chair he sat in. But as he was trotted out into the hall by a young handler in order to hold his first press-conference as “ambassador,” he beamed with pride.

As soon as I approached Tarre and another key figure in Juan Guaido’s coup administration with critical questions about their legitimacy – and about their apparent participation in a closed door meeting to discuss a US military assault on Venezuela – their ebullience turned to rage.

In an exclusive report on April 13, The Grayzone exposed a private roundtable that gathered a who’s who of Trump advisors, right-wing Latin American officials, and Venezuelan opposition figures to discuss “Assessing the Use of Military Force in Venezuela.” The meeting was hosted on April 10 at the Center for Strategic and International Studies (CSIS), a Washington-based think tank where Tarre had been employed as a fellow. And the newly installed ambassador’s name appeared on the meeting check-in list.

He took off his glasses and tried to give them to her, claiming “You did not see anyone in the streets [of Venezuela]!” (where he has not been in 5 years) pic.twitter.com/Hh8ZzPgc57

When I asked Tarre if he had participated in the roundtable, and if he thought it was normal for an ambassador to discuss a foreign invasion of his own country, he pivoted to a familiar opposition talking point: “[Venezuela] is a country invaded by foreigners. Invaded by Russian agents. Invaded by Cubans.”

I countered that any Russian and Cuban officials currently in Venezuela had arrived at the invitation of the internationally recognized Maduro government. To this, a visibly riled Tarre offered up a strange historical analogy:

“No!” he barked at me. “Any government that will help is invited. When the Soviet Union was invaded by Hitler, help from the Allies was fundamental; if not, there would be defeat at the beginning. The same with us!”

In twisting the history of World War Two into an unrecognizable jumble, Tarre wound up conceding that the Venezuelan opposition’s hopes for regime change were entirely contingent on US military support.

I followed up by asking which institutions the shadow administration of National Assembly President Juan Guaido currently controlled, questioning the legitimacy of Tarre and other figures who were essentially playing government under Guaido’s watch.

“The street, girl! The street!” Tarre snapped, condescendingly addressing me as “niña”.

I replied that during my three weeks in Caracas this February, I witnessed massive street mobilizations in support of President Nicolas Maduro. When I provided him with my eyewitness account, he whipped off his glasses, shaking them in my face to imply that vision problems accounted for my assessment.

“No, there are many paramilitaries, many colectivos, much killing,” Tarre exclaimed, “I am giving you a gift so you can see well.”

So when were you last in Venezuela, I asked him. “Five years ago,” came his reply.

Smolansky blows his top when asked about CSIS meeting
David Smolansky, a former Caracas mayor and prominent figure in Guaido’s US-backed Popular Will party, fell into a similar fit of petulance when I asked him about his participation in the April 10 CSIS meeting to assess “the Use of Military Force in Venezuela.”

I asked @dsmolansky about his participation in a @CSIS meeting “assessing military options for VZLA” & if it was appropriate for someone working on migrant issues at the OAS to attend such an event.

He replied by accusing me of supporting Cuban agents torturing Venezuelans ? pic.twitter.com/cn0dJLWwQh

“You know that because you were the one that published that,” the clearly annoyed Smolansky replied.

“Do you think it’s appropriate for someone working on migrant issues at the OAS to be advocating for or meeting about war in Latin America?” I asked, pointing out Smolansky’s role as OAS “Coordinator” on the Venezuelan migrant and refugee issue. By all accounts, a US military invasion of the country would only create more migrants, and possibly destabilize Venezuela’s neighbors.

Dismissing my characterization of the meeting as “opinion” (though the check-in list obtained by The Grayzone clearly outlined its disturbing agenda), Smolansky whipped out a familiar talking point.

“What a shame you support Cuban agents that are torturing people in Venezuela,” he snapped before walking away to greet friendlier media. “What a shame!”

For Smolansky and Tarre, the true shame may prove to be that neither of them were prepared to answer critical questions about their authority – or lack thereof – to officially represent Venezuela.