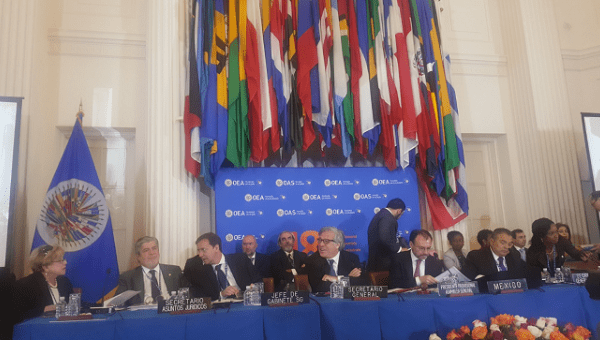 Ambassadors from four Caribbean countries—St Vincent, Barbados, St. Kitts and Nevis, and Trinidad and Tobago—boycotted the spokesperson for the self-proclaimed interim president of Venezuela, Juan Guaido, before he addressed the Organization of American States (OAS) in New York. The Caribbean leaders got up and left the room just before Gustavo Tarre spoke to the OAS to protest Guaido’s claims and in support of Venezuelan President Nicolas Maduro.

Gustavo Tarre delivered a speech during a session held by the Permanent Council of the OAS three months after Juan Guaido, leader of Venezuela’s National Assembly that is in contempt of the Supreme Court in 2016, declared himself the country’s interim president, ignoring the Venezuelan constitution and international law.

Ambassadors from at least four Caribbean countries—St Vincent, Barbados, St. Kitts and Nevis, and Trinidad and Tobago—left the room before Tarre spoke to show their opposition to the OAS accepting Tarre as Venezuela’s representative to the multinational organization.

The OAS voted to recognize Tarre as Venezuela’s official delegate earlier this month, with 18 votes in favor, nine against, six abstentions and one absence. The U.S. and most of the OAS’s 34 member states recognize Guaido as Venezuela’s interim leader.

Tarre plans to keep attending OAS sessions and representing Venezuela. Maduro announced his plans to hold a gathering next Saturday to celebrate its departure from the organization.

Samuel Moncada, Venezuelan ambassador to the United Nations had previously represented Venezuela during OAS sessions, however, the United States State Department recently restricted his entry into NY by a radius of 40 km.

The OAS and the Inter-American Development Bank are the only two multilateral organizations that recognize Guaido as the interim president of Venezuela.