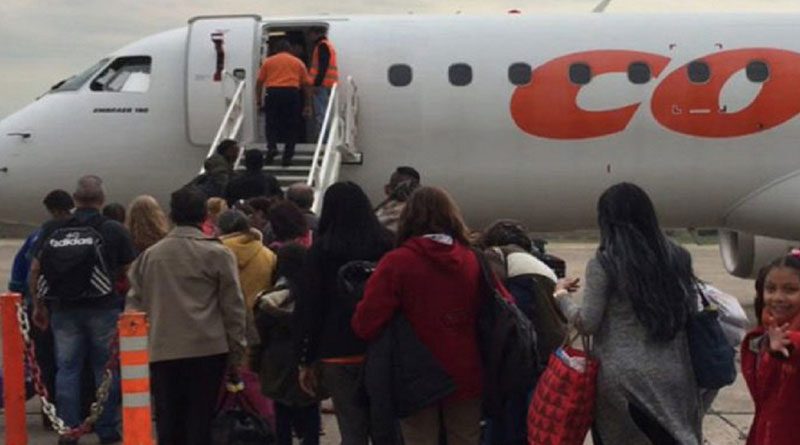 Three days ago, Peru announced the expulsion of the fifth group of Venezuelans, who they said had criminal records for crimes against heritage, and their Interior Minister warned “you better leave the country, because you will be arrested and expelled. We will harden our immigration policy with them. ”

However, this weekend, Venezuela denounced the government of Peru for halting the repatriation of more than 100 nationals through a Conviasa flight that was to pick them up, but could not even reach the Andean country.

According to Foreign Minister Jorge Arreaza, the Peruvian government and private companies in that country refused to supply the fuel for the Conviasa aircraft to fulfill its mission, as a result of the economic blockade imposed by the United States.

“When our aircraft had taken off to Peru to bring back new returnees, we were forced to suspend the operation since they did not guarantee the supply of fuel. Through our Foreign Ministry, efforts are being made not to leave them helpless,” he published on Twitter.

For his part, the consul of Venezuela in Peru, Marlon Senegon, explained to teleSUR that when the fuel problem had already been solved, and the aircraft was authorized to enter the airspace of Peru, the airport authorities began to demand a series of new documents, although Conviasa had already paid for the fuel it would use and sent what had been required.

RELATED CONTENT: Venezuelan Victims of Xenophobia in Ecuador on Their way to Quito

One of the affected Venezuelans told teleSUR that he was tired of the humiliations and expletives of those who are victims on a daily basis, and that all he wanted was to return to Venezuela.

“They don’t want us here, they don’t let us out, you better decide what to do brothers, we are tired of being judged, that they tell us we are hooligans, thugs, murderers, when we aren’t,” he said.

It is not the first time this happens. Last May, according to the website of the Venezuelan Foreign Ministry, another flight was suspended “due to the refusal of the multinational energy company Repsol to supply fuel to Conviasa’s airplanes, even though it had previously been paid by the Venezuelan government.”

On the other hand, Juan Guaidó’s “ambassador” in Peru, Carlos Scull, announced the intention of his “embassy” to help Venezuelans who suffer xenophobic attacks, but will also collaborate with that country to “capture and identify” those that “tarnish the image” of the Venezuelan community. “We are working with the National Policy Commission of the National Assembly. We want to collaborate with Peru in the capture and identification of criminals that defile the image of the Venezuelan community,” he said.

Meanwhile, the pressure against Venezuelans in Peru increases with demonstrations of xenophobia increasingly frequent in the streets and cases of arbitrariness of police authorities.

Several videos that have been made viral on social networks, show cases of aggression in public transport, marches demanding the departure of Venezuelans who are described as “garbage”, police inaction to attacks on Venezuelans or, in other cases, these attacks come from the same police officers.