Yulimar Rojas poses with the flag of Venezuela after winning her third consecutive world title in Oregon on Monday, July 18. Photo: Twitter/@WorldAthletics

Yulimar Rojas, the triple jump star of Venezuela, became the first female athlete to win three consecutive golds in the event in world championships. She won her third straight world title on Monday, July 18, at the 2022 World Athletics Championships in Eugene, Oregon, the United States. The earlier world championships that she won were London 2017 and Doha 2019.

Winning the gold on Monday night, 26-year-old Rojas once again won the hearts of her fans and brought respect and pride for all Venezuelans. Her family members, friends as well as the entire nation watched her participation and cheered for her when she jumped 15.47 meters in her second attempt, thus winning the title with a 58-centimeter victory over her nearest rival, Shanieka Ricketts of Jamaica.

After winning the gold medal and becoming the first woman to win gold in three consecutive championships in this sport, Rojas gave an interview that she later shared on her social media accounts, where she is followed by almost 190,000 fans.

“I am happy, I am satisfied,” she said. “For me it is a pleasure to be able to wear this tricolor on my chest. Venezuela raises the flag high for Venezuelan women. I think it has been a victory of sports for Venezuela, a victory for my team, my people, for those who believe in me and who have never stopped supporting Yulimar Rojas.”

She also made a self-evaluation of her performance in Eugene and highlighted that “it has been a complete victory, in fitness, health, work, commitment, passion. A victory for sports, a victory for Venezuela.” 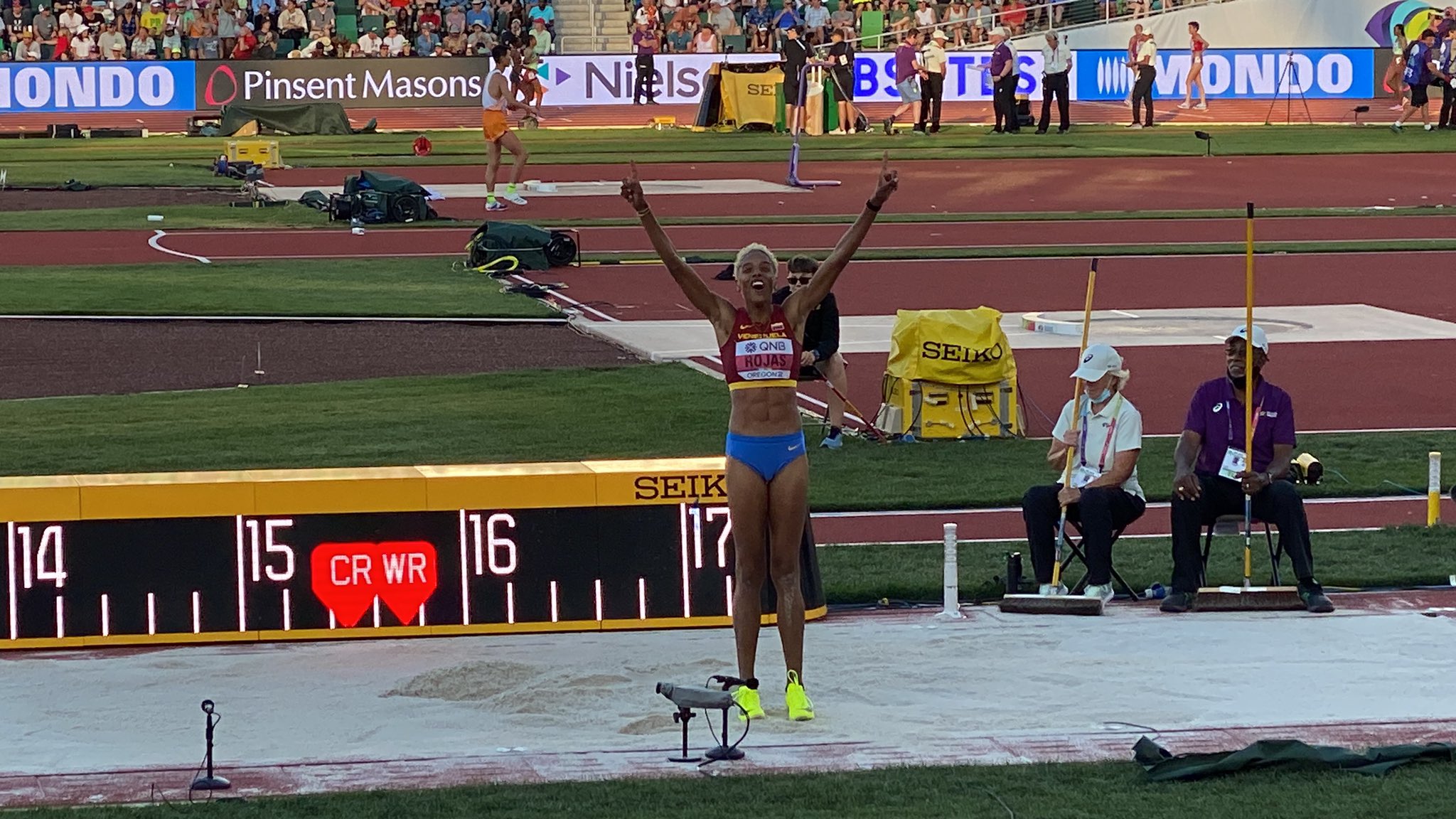 Moreover, Rojas expressed gratitude and humility for being among the best athletes in the world. “It is incredible to be able to conquer this title—the sixth world title of my career, and in a good way, enjoying every competition, every moment that God gives me and every blessing that comes to my life,” she said without mentioning that she dreams in breaking the 16m barrier.

She added that one must make efforts for such achievements. “It is an example to overcome circumstances, injuries,” she said. “Those who believe that they cannot achieve something that they are passionate about… You should believe that if you go for it, you can achieve it.”

Yulimar Rojas was born in a humble family in the small Caribbean barrio of Pozuelos in Anzóategui state of Venezuela. She is the reigning Olympic champion in triple jump, and holds world records in the sport. However, she faced a lot of uncertainty earlier this year due to injuries, and was forced to miss a tour last month.

Nevertheless, now with three world titles to her name, Rojas surpassed the record of Colombia’s Caterine Ibargüen who had won two consecutive golds in world championships.