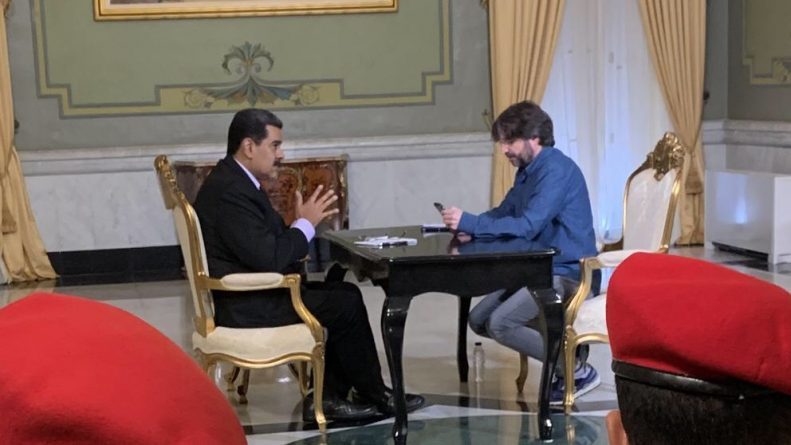 This Sunday the “Salvados” program of Antena 3 (Spain) screened an interview made on February 1 to the Venezuelan President, Nicolás Maduro, made by the journalist Jordi Évole. If you missed it, here you can see it complete!

In the interview, the Spanish journalist asks President Nicolás Maduro if he has thought about leaving the presidency, after the recent events that Venezuela has experienced and the self-proclamation of Juan Guaidó. “The good thing for the country is that the Constitution is respected. I am the first to do it, I swore to respect and enforce the Constitution, and that is my duty,” responds Maduro to Évole, who insists on asking several times if he is willing to go to presidential elections again, something demanded by the European Union.

In this regard, Maduro responded with the following question: “Why does the European Union have to say to a country in the world that has already made its presidential elections in time to repeat them again?”

On another occasion when asked if he refuses to call elections, Maduro replied: “I do not refuse to call them, there are elections in 2024. We do not care at all what Europe says about Venezuela. Europe that takes care of its problems like unemployment or migration.”

“Look how they left Iraq, dismembered, and who today suffers the consequences of the destruction of Libya?” Maduro asks Évole. “It has been serious mistakes from which humanity must draw lessons. You have to remember that the Bush-Aznar coalition led the Iraq war and they paid. ”

“If this ends badly, you will feel responsible?” Asks Jordi Évole to Maduro about the crisis in Venezuela. The president replied that the situation “is not going to end badly” and adds: “We have experience of 20 years of struggles! We are truly a popular force with a historical character with a project and with the leadership of the country. ” In any case, Maduro affirms that, “for good or for bad”, he assumes “all responsibility”, for which he always tries to “act in good will”.

Asked if the situation is likely to end in a civil war, the president of the country responds that “nobody can answer right now with certainty. Everything depends on the level of madness and aggressiveness of the northern empire.”

“The military option is on the table of Donald Trump. We have to prepare ourselves to defend the right to peace, “said the Venezuelan President. “Thousands of innocent Venezuelans may end up paying with their lives,” the journalist insists Maduro, but he stresses that this will only happen “if the US empire attacks the country.”

Évole talks with Maduro about the crisis in Venezuela and the demand of the European Union, giving the Venezuelan president eight days to call elections in the country. “We do not accept ‘ultimatums’ from anyone,” answered Maduro. “It’s as if I told the European Union that I give it a few days to recognize the Republic of Catalonia,” he declared.

On the cause of the country’s problems, Maduro told Évole that he is very self-critical and that his government is “responsible for many things that are not working”. It demands greater efficiency in your government. However, remember that the aggression against Venezuela is responsible for many of the conditions for which the country is in crisis.

“Venezuela does not have a humanitarian crisis, it has a social care policy but it does not allow it to alleviate the wounds of the economic war,” explained Maduro, asked about the situation in the country. In addition, he told Évole that “many of the people who leave Venezuela have been deceived, they leave with a hope that is a false vision.”

Your answers to Pedro Sánchez

President Maduro also issued a harsh message to Pedro Sanchez, president of Spain, after he sent an ultimatum to call elections in Venezuela: “He’s a fake! He has not been chosen by anyone. He should be the one to call elections, because the Spanish people did not choose him,” he said, recalling that he was elected by the Spanish congress after Mariano Rajoy was ousted.

In addition, the president of Venezuela criticized Sánchez for not having morals to stop giving lessons to Venezuela. “For a long time we have not followed orders from Madrid, so you know, Pedro Sánchez! You made a mistake and it’s going to be worse than Aznar when he got into Iraq. ” He said: “I hope you do not stain your hands of blood with Donald Trump in the Venezuelan crisis, Pedro Sánchez.”