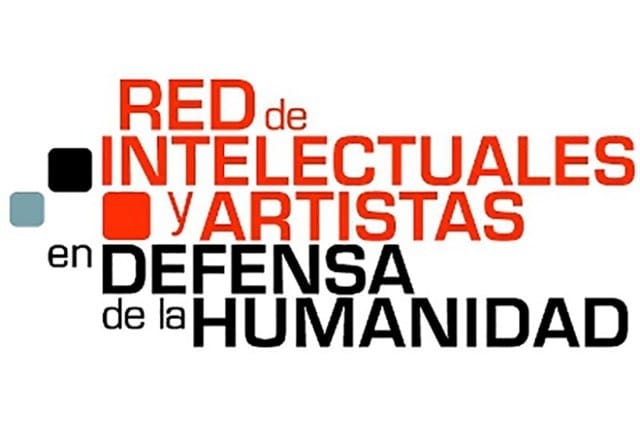 From the Argentine chapter of the Network of Intellectuals, Artists and Social Movements in Defense of Humanity, we express our strongest repudiation of the violation of international law and interventionism of the neoliberal government of Macri and “the Cartel of Lima”.

We are ashamed as Argentines, and Latin Americans that President Macri is feeding a new period of coups d’état promoted jointly by the Venezuelan oligarchy and the government of the United States; just as that imperialist country encouraged, supported, financed and led the bloody coups of Pinochet in Chile, Videla in Argentina and all the pro-American dictatorships in Latin America and the Caribbean in the 20th century.

We are ashamed but we are not surprised. Besides plunging the Argentine people into misery, with the economic backwardness and the impoverishment of the majorities, his government and family represent those economic groups and that rancid oligarchy that was a subordinate partner of the different empires and that always benefited from the dependence and surrender of our sovereignty, betraying the ideals of all the liberating projects of Our America, with the weapon of lies and accusing of tyrants the best political leaders in the history of our America.

The warlords, representatives of the most concentrated fraction of transnationalized capitalism, shout their interests in Latin America without euphemisms or disguises: they want to regain control of what was their oil colony for almost 100 years and that for the past 20 has resumed the paths of the independence of the hand of Hugo Chávez and his brave people.

The Anglo-American policy, to control Venezuelan oil, seems determined to destroy the brother Bolivarian country by repeating the strategic score used in Libya, even in Syria.

But they are wrong to measure the moral reserve of the Venezuelan Bolivarian people and the anti-imperialist force present throughout Our America. For more lies that replicate and confusion that sow, nests in our popular memory the clarity of knowing that those who are at the head of looting (passing over all the supposed rules of capitalism) and this brutal offensive against the constitutional government of the The Bolivarian Republic of Venezuela is the plutocracy of the United States and the right-wing governments – which, as the kickoff -for corruption- ex-president of Peru said, feel like the lapdogs of the empire.

There is no doubt what side you have to be. Otherwise, we will be supporting a neocolonial coup d’état that will undoubtedly undertake its revenge against that subsoil of the homeland that recovered its dignity with the Bolivarian Revolution and that today is the protagonist of its history.

The economic situation suffered by Venezuela is the result of the hybrid war imposed on it years ago. As in all the countries that went through wars, there is a population that goes away, and another that resists.

From the REDH we support the path of transformation that with considerable sacrifices and great achievements has been undertaken by the people of Venezuela and that today continues to build in full resistance. Let us support this path of sovereignty and independence with all our strength. We call on all intellectuals, artists and social movements to be an active and protagonist in this urgent hour.

No to the coup promoted by the United States in Venezuela!

All with Venezuela and its revolutionary and constitutional government!