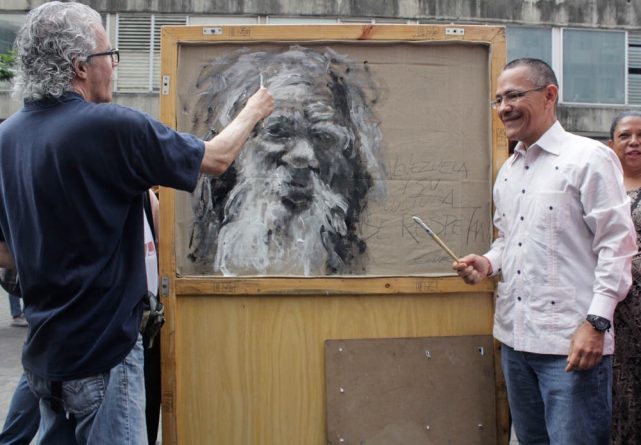 As part of the campaign “Venezuela and its Culture are Respected,” a recognition to the Venezuelan painter and artist, Armando Reverón in Sabana Grande, in front of the Manuela Saenz Popular Economy Center, together with cultists from all over the country, as well as the Dancing Devils, La Saragoza and Madamas, an opportunity that was taken to make reading of a Manifesto in rejection of the vandalism acts towards the statue of the painter of light, by the director of the Museum of Contemporary Art, Edgar Álvarez Estrada. The Minister of Culture, Ernesto Villegas and authorities of the Foundation for Culture and Arts (Fundarte) were present in the activity.

For the Minister of Culture, although Reverón lived in the last century, he is a contemporary artist who was ahead of his time with his proposal, “he is not just a painter, Reverón in himself was a work of art.”

“Juanita Mota, his partner, was part of his artistic proposal, the little pancho, his dolls, his canvases, his brushes, the materials he used to paint,” added the head of culture, who also expressed his joy because Reverón is stirring the artistic disciplines, “from the dance, the choreography pays homage to the painter. Because art is one, it is expressed in different platforms, in different ways, but in the end, it is the product of the same sensibility.”

He took the opportunity to praise Reverón’s painting made by Miranda’s painter, Edgar Álvarez Estrada, “painted the painter of painters.” He also questioned the actions of hatred against the statue found in the Bulevar de Sabana Grande, assuring that if they had not been for these actions, they probably would not have been in the place, defending love.

Villegas, also thanked the workers of PDVSA La Estancia, who installed the set of artwork on the Bulevar de Sabana Grande, within the framework of its recovery. This is a joint work that has been developed with the National Museums Foundation (FMN) and the Cultural Heritage Institute (IPC) to evaluate the restoration of the work. He explained that if restoration is not possible, President Nicolás Maduro authorized the construction of a larger Reverón, hand in hand with all the artists of Venezuela, “while a new statue is being restored or built, this will be a permanent point of cultural turmoil.”

The activity was also attended by Héctor Campos, general secretary of the Foundation for Culture and the Arts (Fundarte), together with the Government of the Capital District, the Caraqueña Identity Secretariat, the Ministry of Popular Power for Culture and its 27 ascribed entities, who will also be responsible for making this, even more, a point of cultural upheaval.

In this order of ideas, the head of culture said that some argue that culture is part of an accessory, because the main thing is food, “the food of the soul is what gives us a figure, which gives us identity and that we continue to feed the Venezuelan soul in any circumstance, in the most difficult circumstance no painter will stop painting, no voice will stop singing, no instrument will stop sounding, no poetry will cease to be recited, no sculpture will stop being modeled, that’s why it is and it will be Venezuela.”

The National Theater Center (CNT) was also there to offer their works, as well as artists and cultures from all corners of the country such as Carlos Azpurua, Luis Alberto Crespo, the poet Enrique Hernández de Jesús and the bailaor flamenco, David Morales. He informed that during this Thursday from the halls of the National Cinematheque throughout the country, they will be showing films in tribute to Armando Reverón. At the same time, acts of redress will be taking place in the other regions of the country.

He announced that the university cayapa for the recovery of the physical plant of the universities will be present in the Armando Reverón Nucleus of the National Experimental University of the Arts (Unearte).

He invited the Venezuelan people not to be demoralized by this cultural crime committed at the beginning of 2019, “on the contrary, fascism hates the identity of peoples, fascism hates culture, hates art.”

On the other hand, he questioned the retrograde government installed in Brazil by Jair Bolsonaro, who eliminated the Ministry of Culture in that nation, “his authorities have a very backward vision regarding society. A high official of this government has said that males have to use blue and girls have pink. That is the conception of the project that today antagonizes Bolivarian Venezuela.”

“We are going to build the beautiful revolution of all colors, for children, for men and also for those who decide on another option in their sexual identity, that is everyone’s problem and everyone deserves equal respect,” he stressed.

Finally, Teresa Maniglia, said that by difference of thoughts, you can not allow them to destroy the beautiful things of our country. So she extended a call to union, “or we all join for the same cause that is Venezuela (…) No matter how you think, no matter how I think, the important thing is that this country is yours.”