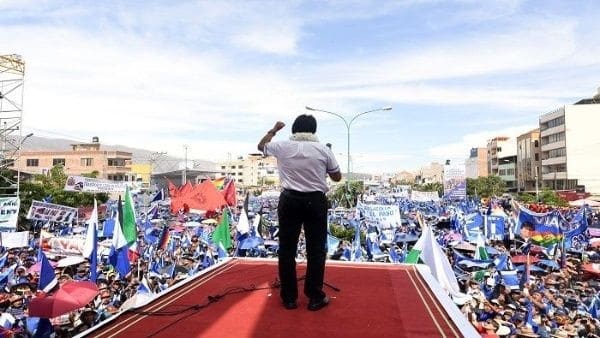 With the administration of Evo Morales, Bolivia becomes a benchmark in the region, for its economic growth and decrease in external debt.

The Economy Minister of Bolivia, Mario Guillén, reported on Wednesday that in 2018 Bolivia was able to greatly lower the levels of its external debt below the limits established by international organizations, that is, below 50 percent of the Gross Domestic Product ( GDP).

The diplomat stressed that this is due to the measures implemented in the country with the Social, Community and Productive Economic Model led by President Evo Morales.

He stressed that thanks to this consolidation, Bolivia can be considered as an example among the countries of South America, due to the “constant and sustained growth” registered by the nation in the last 13 years.

“I think that these 13 years Bolivia has been an example in the region, we are an economy that grew steadily, in a sustained manner,” said Guillén. The Central Bank of Bolivia (BCV) indicated that between 2005 and 2018, Bolivia’s public external debt fell from 52 percent to 24.8 percent in reference to the national GDP.

The Bolivian minister recalled that previous administrations asked international organizations for loans of economic resources to cover expenses of the State, which took the debt to around five billion.

He pointed out that currently the acquired foreign debt is invested in the “industrialization of the country, the promotion of productive activity, the construction of roads, among others.”

He also informed that the main creditors of Bolivia are China, with 791.4 million dollars; France, with 144.5 million; and Germany, with 59.8 million dollars.