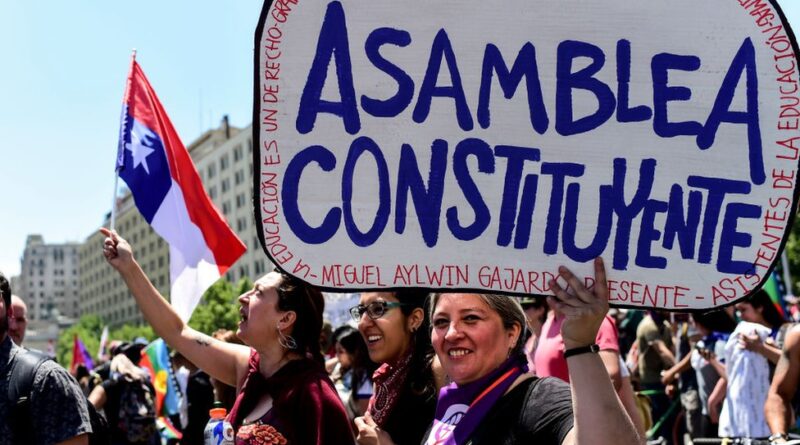 Once again, the oligarchic frond is trying to cheat and confuse everyone. It intends to undermine the prestige and moral authority of the Constitutional Convention, which is the last hope for a peaceful and democratic change that will put the country on the path of social justice.

Civil, military and religious institutions are sinking into the swamp of corruption while citizens are increasingly distancing themselves from them. However, the social and political force to organize and guide real change has yet to emerge. This is where the work of the Convention can help: to create the conditions for the emergence of a driving force for a new Chile. But time is running out because the oligarchy is gambling to save from shipwreck the system built by means of state terrorism during 17 years of dictatorship.

Its current tactic consists of undermining the legitimacy of the Convention that the oligarchy itself was forced to convene to avoid the collapse of the system. It is well aware that somehow the Convention will eventually regain all the powers of a Constituent Assembly. Its legacy for Chile will be a true democracy with citizens free to decide their destiny.

To prevent this, the oligarchic frond has reactivated its offensive arsenal: the media, the paid opinion makers, or as Gabriel García Márquez called them, ”the tried and tested alchemists of law.”

Their tactic consists in discrediting the Convention and putting the presidential and parliamentary elections in the foreground. In this field the oligarchy has experience and unlimited resources. It has bred parasites who, under various political disguises, try to save the system and its institutions. This oligarchic effort is oriented above all towards young people. Attracting them to the political-electoral juncture is the surest way to subdue them, taking away the strength of the mass support that the Convention needs to fulfill its mission.

The Chilean youth has not yet been able to form leaders of the moral, intellectual and political stature of Miguel Enríquez, Raúl Pellegrin, Elmo Catalán, Carlos Lorca, Rodrigo Ambrosio and so many others who stood up against the dictatorship and its privileges, without looking for honor or bureaucratic positions.

Since the time of the resistance against state terrorism, popular and democratic organizations have been clamoring for a Constituent Assembly. They demand a new Political Constitution that will inspire the laws and institutions that will govern a different Chile.

The Convention offers an opportunity to achieve this without firing a shot. But this process is at risk. The oligarchic frond is trying to discredit the Convention in order to isolate it and finally submit it to its will in the midst of the indifference of the citizens.

We are not a people of victories, it is true. We have suffered defeat after defeat for almost two centuries. We must prevent this from happening again. Conservative forces cut to pieces the Liberal army—the “progressivism” of the time—in the battle of Lircay in 1830. The civil war of 1891, financed by British capital, tore apart with bestial ferocity the independence efforts of President Balmaceda. The hard work of communists and socialists made possible the fragile victory of President Salvador Allende in 1970. But the oligarchic frond had armored itself this time with US imperialism and did not hesitate to unleash a massacre that frightened the world. The peaceful process of change aimed at socialism was persecuted, tortured and assassinated for 17 years.

The struggle of today’s revolutionaries is to build an alternative in the conditions—and with the characteristics—that the challenge of social and political change in Latin America has today.

The possibility of restarting the work of building a socialist alternative for Chile depends on the success of the Constitutional Convention. The new Constitution, we trust, will enshrine the equality of rights and duties of citizens. Health, education and social security will cease to be private businesses. Men and women will have equal rights. Indigenous peoples will achieve the recognition and autonomy that they have been denied. The armed forces and police will be servants of the people and not lieutenants of the oligarchy. Workers will be able to negotiate decent wages without pressure or threats.

In this way, as a result of the new Constitution that Chile expects from the Convention, the conditions will be in place for a sustained democratic advancement.

For that future we must prepare. “All power to the Convention” must be much more than a slogan. To make it a reality we need the organized mobilization of the people until the Convention fulfills its mandate.

Featured image: Chileans at a protest in 2019 demanding a Constituent Assembly for a new Constitution. File Photo