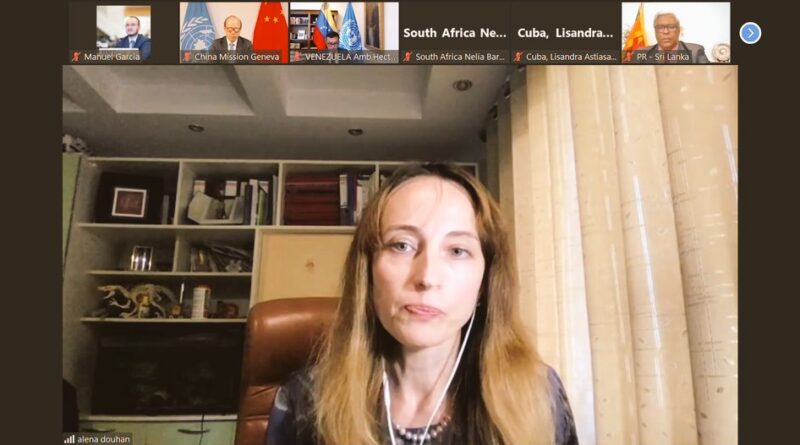 Hector Constant Rosales, Venezuelan ambassador to the United Nations and other International Organizations based in Geneva, reported that the countries of the Group of Like Minded Countries (Sanctioned Countries Club) has expressed a “unanimous condemnation of this illegal practice [unilateral sanctions] that directly affects the right to development of nations and peoples.”

In a post on his Twitter account, @h_constant, Constant Rosales detailed that this was expressed at a virtual meeting with Alena Douhan, the United Nations Special Rapporteur on the Negative Impact of Unilateral Coercive Measures.

The Venezuelan diplomat wrote, “At the invitation of China, the Like-minded Group of the United Nations Office at Geneva (UNOG) met virtually with Alena Douhan, Special Rapporteur on Unilateral Coercive Measures. There was unanimous condemnation of this illegal practice that directly affects the right to development of nations and peoples.”

It is important to recall here that on February 12 this year, Alena Douhan urged the United States, the European Union, and other countries to lift the illegal unilateral coercive measures imposed on the Bolivarian Republic of Venezuela, as this type of action violates the human rights of Venezuelans and is a collective punishment inflicted on the Venezuelan people, which is considered a crime against humanity.

On that occasion, Douhan had highlighted that the illegal sanctions promoted and imposed by the United States and Europe on the Bolivarian Republic of Venezuela “have had a devastating effect on the fundamental rights of the Venezuelan people.”

Many intellectuals, activists, and diplomats around the world have been calling for the formation of this alliance of illegally sanctioned countries. The year 2021 formally marks the beginning of this alliance that will be needed more everyday, especially because the military superpower United States and its follower European Union are increasing their illegal attempts to punish entire nations. Most of the time, these governments do not comply with their own dictatorial way of running the world.

The only organization allowed to sanction other countries is the United Nations with the green light of the UN Security Council, but in recent decades the United States and the European Union, in their attempt to force other countries to do their bidding, have been imposing unilateral sanctions (coercive measures) that are in clear violation of international law and the UN Charter.