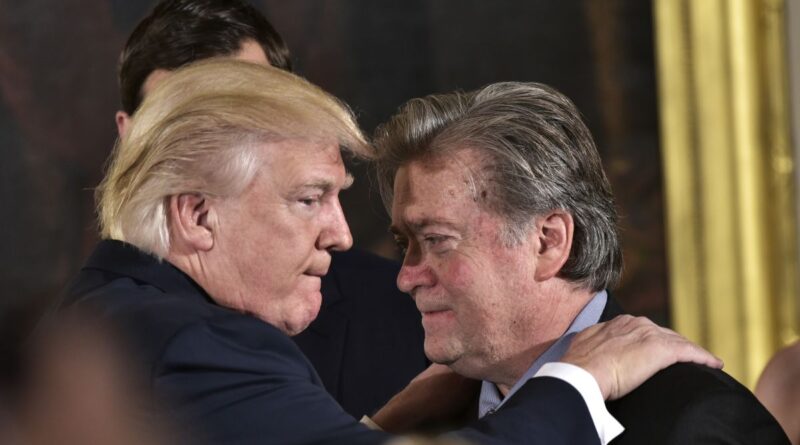 It often happens this way: extreme right-wingers, or call them ‘ultra-conservatives,’ either in the United States or Europe, suddenly fall from grace, after committing the most heinous crimes. Sometimes it is child abuse or sexual harassment, but most of the time, it is a corruption of tremendous proportions.

In theory, in their own theory, it is not supposed to be this way. Listen to the conservatives, and they will tell you that they are there in order to uphold law and order, as well as the traditional culture of their countries.

But the reality is often very far from the theory.

Steve Bannon has fallen. He has fallen hard, flat on his face. But definitely not as hard, as others would fall, would they commit crimes of similar magnitude.

Steve Bannon was actually not caught and charged with trying to ignite the WWIII or conspiring to overthrow the left-wing governments all over the world. He was not charged with an attempt to destroy China.

He was arrested ‘only’ on charges of ‘defrauding investors,’ together with his cohort Brian Kolfage.

“Kolfage was arrested last week, along with Bannon and two others, and charged by the US Attorney’s Office for the Southern District of New York with defrauding investors out of hundreds of thousands of dollars a project pledging to construct a wall along the southern US border. He is due to be arraigned on the charges on Monday in a video court appearance.”

“Steve Bannon, a former White House strategist and Breitbart editor, was finally kicked out of an Italian monastery, which even Newsweek wittily described as a “far-right boot camp.”

Or, as even some of the Western mainstream media outlets defined it – a modern ‘gladiator’s school.’ The monastery was supposed to offer “classes,” which Bannon described as “the kind of underpinnings of the Judeo-Christian West.”

That, for already quite some time, means ‘insulting and antagonizing China,’ as well as several other nations which the Western extremist and often openly racist ideologues have been depicting as hostile to the US and European hegemonic interests.

Some of those who oppose Bannon’s radical political stands are now bringing vast charges against him, but legal and moral, and such charges are ranging from pushing the United States towards the war with the People’s Republic of China to interfering with internal affairs of other countries, including those in Europe. There are other, unsavory accusations against the former White House strategist and a close ally of President Donald Trump: child abuse and enormous corruption.

The question is: how could the individual against whom so many accusative fingers are pointed at, survive at the top of the establishment for so many years, in so many different roles and positions?

Yes, he gets kicked out from places: first from the White House, then from the “gladiator booth camp,” and finally from the luxury yacht belonging to an anti-Beijing apostate. But somehow, he always manages to bounce back. Until now. Hopefully, for not much longer.

Alarms should have been ringing for so many years. But were they? If yes, no one has been paying much attention. As early as in 2016, even an extreme right-wing FOX News picked up Associated Press report which was accusing Bannon of anti-Semitism:

“In a sworn court declaration following their divorce, Piccard said her ex-husband had objected to sending their twin daughters to an elite Los Angeles academy because he “didn’t want the girls going to school with Jews.”

“A convicted pedophile visited Donald Trump’s White House on at least 13 different occasions in 2017 to meet with then-chief strategist Steve Bannon, according to leaked visitor logs.

George Nader, who has been convicted of sexually abusing young boys and is now in federal prison awaiting trial on child sex trafficking charges, first visited Bannon in the White House in February 2017, the month after Trump’s inauguration, the Washington Examiner reported.

After that, he kept visiting Bannon, who had a West Wing office yards from the Oval Office, the leaked visitor logs revealed, but it isn’t clear if he entertained Nader in his office or somewhere else in the White House.

The revelation raises serious questions about how a convicted pedophile could be allowed entry repeatedly to the White House. The Secret Service is responsible for carrying out background checks of all visitors.”

The “revelation” also raises questions about whether there have been two tiers of justice: one for the common US citizens, and another one for those who are levitating in the highest spheres of, mainly right-wing, power.

And if one would think that Steve Bannon is ‘only’ anti-Semitic, then what about his deep allergy towards the Muslims; and the support for the Trump’s so-called “Muslim ban” and keeping out from the United States all those “bad people” (meaning non-whites and non-Christians)? His obsession with the wall between the US and Mexico is, of course, related to the “topic.”

But who would be Steve Bannon without China? He is hatred impersonated against China.

As for his fellow right-wing crusaders, like Peter Navarro, Marco Rubio, and Mike Pompeo, China is always ‘there,’ in the middle of vile speeches, dragged through the dirt, belittled.

Steeper and faster is a decline of the American Eagle, more confident is an ascend of the Chinese Dragon, louder, more desperate, and bizarre is the anti-Chinese rhetoric of the pro-Western warriors, led by Steve Bannon and his mates.

On 08 June 2020, AntiWar.com described something that would be unimaginable just several years ago, but what is turning into a norm, under the present White House administration:

“New Yorkers looked to the sky in puzzlement the night of 03 June as a fleet of airplanes circled New York Harbor with banners that read “Congratulations New Federal State of China.” Behind the bizarre stunt was exiled Chinese billionaire Guo Wengui and former White House Chief Strategist Steve Bannon. The duo deemed the Chinese Communist Party illegitimate and declared a new state of China from a boat floating in front of the Statue of Liberty.

In a live stream, Guo and Bannon read the Chinese and English versions of “A Declaration of the New Federal State of China,” a document that lays out their fantastical plan to take out the CCP and form a Western-style democracy in China. The live stream aired in China on 04 June, which marked the 31st anniversary of the Tiananmen Square protests and crackdown in Beijing. “The Chinese Communist Party is a terrorist organization funded by the Communist International which has subverted the legitimate Chinese government in the past,” the document declares.”

Would this be done the other way around, like if the People’s Republic of China declared the United States of America a terrorist genocidal and illegitimate state, because it exterminated most of its native population, forced slaves from Africa onto its territory, and then massacred tens of millions of people on all continents of the world, that would be surely considered a declaration of war. But obviously, the US and its leadership are truly ‘spoiled’; they are used to getting away, literally, with a murder. Or with a war.

Steve Bannon has been twisting the narrative on basically everything that is related to China, from Xinjiang to the South China Sea, an extremist religious cult such as Falun Gong, recent historical events, Chinese Revolution, and the leadership of the Chinese Communist Party (CCP). He and his cohorts are fanatically anti-Communist, as they are outrageously racist.

The danger of Bannon lies in the fact that he is an integral part of the extreme right-wing network, which is now spreading from Europe to India, from North and South America to Asia. He is its product, as well as its maker.

Whoever is confronting China is his ally: from India’s Modi to Donald Trump.

Or all those West-backed rioters and the anti-Beijing individuals like Elmer Yuen Gong Yi. In fact, the Hong Kong riots are direct results of the activities of Steve Bannon and his mates.

If they are not stopped, there really may be a war. But that does not frighten Steve Bannon. He has nothing against a war. He desired a war. He is igniting it. Like the crusaders of the middle ages, he thrives on expansions and the conflicts.

“The yacht former white house senior advisor Steve Bannon was arrested on recently is the 152-foot-long Feadship Lady May that’s reportedly owned by Guo Wengui, an exiled Chinese billionaire who has business ties with Bannon. And it’s for sale.”

It is all very symbolic. It is shocking.

But at least the man who did so much harm to the world, and who has been pushing his country towards direct confrontation with the most populous nation on earth, is under arrest, although presently released on $5 million bail.

“US District Judge Analisa Torres said President Donald Trump’s former chief strategist can appear in her court along with three co-defendants on a video screen because of the health threat posed by the coronavirus.”

A lenient treatment. But logical; shockingly, Mr. Bannon is not seen as a delinquent by the US establishment. To many, he is just a pro-Western, pro-Christian, pro-right-wing warrior. As he himself so proudly declares he is.