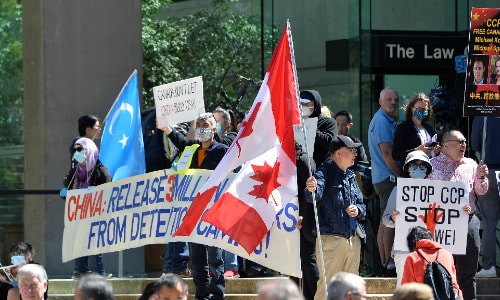 Meng Wanzhou, Huawei’s chief financial officer, has lost a key argument in her fight against extradition to the US, after a Canadian judge ruled that the charges would be seen as a crime in Canada and the case can move forward.

The British Columbia Supreme Court in Vancouver decided that the threshold of double criminality has been met in Meng’s case. This requirement says that a person can be extradited over breaking another nation’s laws only if a similar law exists in the extraditing country.

Meng’s lawyers, who have been fighting against her extradition to the US since December 2018 when she was arrested at Vancouver’s airport, have been arguing that her alleged crime essentially concerns violations of the US sanctions against Iran. Washington does indeed want her on charges of defrauding financial institutions – and HSBC in particular – while attempting to circumvent US sanctions against Iran.

Since Canada lifted its sanctions against Iran back in 2016, her actions could not be seen as a crime there, the defense team said. Associate Chief Justice Heather Holmes, however, ruled that “fraud” is at the center of this case.

She also noted that the approach argued by Meng’s lawyers would “seriously limit Canada’s ability to fulfill its international obligations in the extradition context for fraud and other economic crimes.”

Meng was arrested by the Canadian authorities at Washington’s behest at the height of a ‘trade war’ between the US and China. Washington also launched a massive campaign against Huawei as it tried to actively discourage its allies from cooperating with the Chinese company in developing their 5G networks.

Huawei Canada has responded to Meng’s arrest by saying they expect “Canada’s judicial system” to “ultimately prove” her innocence.

The Chinese Embassy took a harsher stance, accusing Canada of being an “accomplice” to the US’ alleged plan to derail the success of Chinese tech companies.

RELATED CONTENT: “We are on the Right Side of History”: COHA Exclusive Interview with Venezuelan Foreign Minister Jorge Arreaza

An embassy spokesperson released a statement expressing “strong dissatisfaction” with the approval of the extradition request by the British Columbia Supreme Court of Canada.

In February, the US Justice Department accused Huawei of conspiring to steal trade secrets from as many as six US companies. The indictment also contained new charges – 16 counts of conspiracy – against Meng.

The extradition hearing is now expected to proceed to its second phase in June, with the court still due to examine whether Canadian officials followed the law when they arrested Meng. Closing arguments are then expected in late September or early October.

Featured image: Canadian rightwingers mobilized to setup the anti-China stsge ahead to the court ruling. Courtesy of the Sentinel.