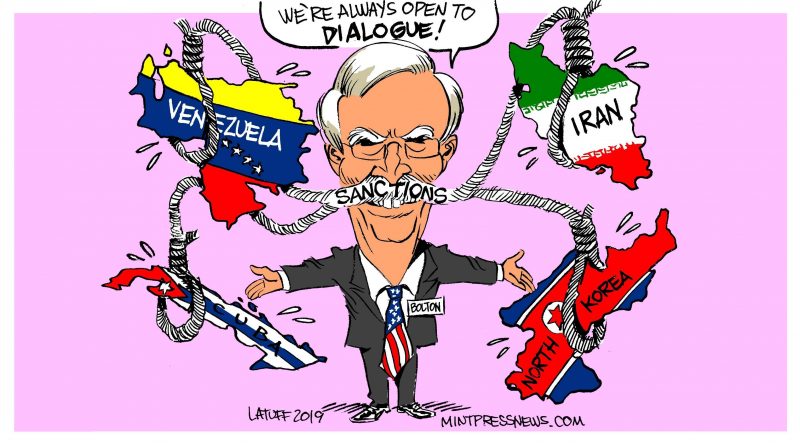 As high-tech globalization destroys the economic basis of industrial capitalism, the global political relations serving that system are also being disrupted. Increasingly aggressive U.S. policies on trade and “national security” have been accompanied by an escalation of diplomatic threats and military mobilizations around the world, currently focused on overthrowing the governments of Venezuela and Iran, either through intimidation or outright war.

The fate of millions of people is at stake in these two confrontations. In April, the Center for Economic and Policy Research estimated that President Trump’s economic sanctions on trade with Venezuela have caused 40,000 civilian deaths since 2018. That’s on top of the suffering caused by the sanctions imposed in 2015 by President Obama. On May 9, Acting Defense Secretary Patrick Shanahan briefed the Administration on preparations for sending up to 120,000 troops to the Middle East, if Iran acts to threaten U.S. “security.”

Americans can’t trust that these political representatives of the ruling class give a damn about our security. Their real goal is the security of that class’ control of society’s wealth, since today’s technologies are making the capitalist system inoperable. To steer government steadily towards that goal into an unknown future, political leaders of both political parties are installing fascist policies and gearing up for war, while lying to our class about their real intentions.

In 2016, Donald Trump campaigned by denouncing the invasion of Iraq as “the worst single mistake ever made in the history of our country,” yet now he’s authorized the U.S. military buildup against Iran. And Robert Mueller, who Democratic leaders said could be trusted to investigate Trump, was also trusted when as FBI director he testified in 2003 that Iraq had “failed to disarm its weapons of mass destruction.” That lie ultimately cost the lives of 5,000 American troops and, according to recent studies, the lives of half a million Iraqis between 2003 and 2011 alone.

Threatening Venezuela and Iran is not about democracy or making people’s lives better. It only adds more danger to the maneuvering for global political supremacy between the United States, China and Russia. Venezuela’s oil reserves are the world’s largest, Iran’s the fourth largest, Russia’s the eighth and China’s thirteenth, challenging U.S. future dominance of this crucial resource.

American attacks on Venezuela or Iran could also become a flashpoint for military conflict between the U.S. and China. New tariffs on Chinese goods have already added to the tensions. On June 1, Shanahan told countries attending the Shangri-La Dialogue in Singapore that the United States would react strongly against countries who steal new technologies and construct new military bases, clearly meaning China.

His statement was immediately praised by Dialogue attendees Senator Angus King (Independent, Maine) and Senator Tammy Duckworth (Democrat, Illinois), showing once again how the ruling class has united many politicians of both parties around its strategic interests.

This gap between the illusion the ruling class presents, and the reality of its intentions, provides a lesson to our class. In fighting for such basic needs as housing, healthcare, education and against mounting poverty, we have to assert our own class interests, not those of the ruling class. Our class has another vision – use the public ownership of society’s wealth to meet the needs of all its people. That is the only way to guarantee that peace triumphs over fascism and war. RC