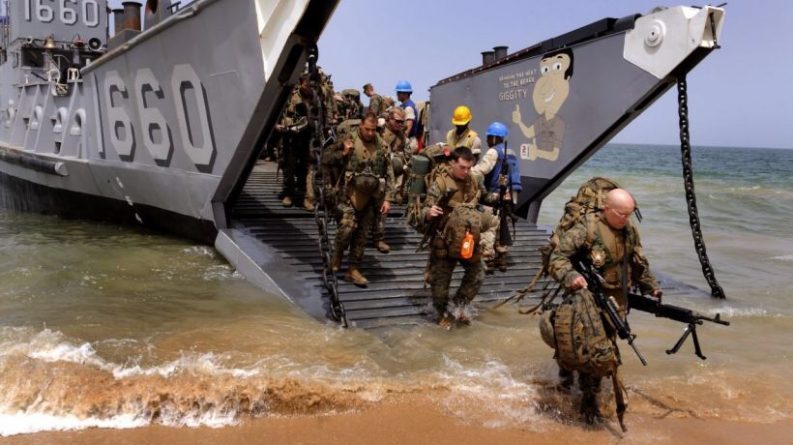 In early February 2019,  the US Senate vetoed the possibility that the government of that country, at least momentarily, (would mount an) incursion by way of an armed intervention in Venezuela, this, despite the fact that Republicans dominate in the Senate. In the House of Representatives of the US Congress, dominated by the Democrats, the positioning is much more adverse to these pretentions of the White House.

However, these conditions of US internal politics do not constitute a relief for peace in Venezuela, because the warmongering rhetoric remains intact in the voices of John Bolton, Mike Pence, Marco Rubio and Donald Trump himself, not only pointing “the military option ” at the Caribbean nation, but also inciting the Bolivarian National Armed Forces (FANB) to depose President Nicolás Maduro and cause an internal confrontation.

During the second week of February, the narrative of the “humanitarian crisis” in Venezuela has increased and the White House, through USAID and the Colombian government, has instrumentalized the placement of supposed “humanitarian aid” on the Colombian-Venezuelan border, refining a trigger for conflict and provoking a commotion through the alleged “forced entry” of the supposed aid packages.

Simultaneously, Venezuelan authorities detained a former Venezuelan colonel, and then fugitive from justice Oswaldo Garcia Palomo, who has been one of the operators in the field to instigate in the Venezuelan armed forces and has been an articulator of mercenary operations, including the attempted assassination of President Maduro in August 2018. García Palomo revealed to f Venezuelan authorities elements of the conspiracy between Colombia and the United States to spark a civil conflict and an armed intervention of external origin in Venezuela simultaneously.

Nor is it coincidence that the self-proclaimed Juan Guaidó has also introduced the narrative of triggering “a civil war” in Venezuela, and also has argued that through his efforts, he could “request foreign intervention” to, in theory, save the Venezuelan population.

Given these elements in the internal politics of the United States and the other details about the coup d’etat in development in Venezuela, it is indispensable to connect the dots:  the possibility that a military variant of the siege of Venezuela, under the rubric of a mercenary war presented as civil conflict, acquires more and more consistency. A scheme of outsourced war in which the United States, through paramilitary factors in Colombia, detonates an irregular conflict and, as a consequence,  creates fractures that could be co-opted inside the FANB to give way to the threshold of chaos.

But there are factors in the regional politics and in the American policy itself that have pointedly shown themselves in frank disagreement with the possibility of an intervention in Venezuela, or the possibility that the current situation may escalate to a civil conflict. Governments of the same Lima Group , such as those of Peru, Chile and Ecuador, among others, have established that position and simultaneously the governments of Mexico, Uruguay, Bolívia and the Dominican Republic have indicated the “risks” that would result from an armed conflict in the Caribbean.

ELEMENTS TO CONSIDER ABOUT AN IMPOSSIBLE TO ENCAPSULATE CONFLICT

However, the outbreak of a war would seriously change the position of those governments facing their own internal political fronts, as they would become the governments that legitimized and gave substance to the outbreak of a war in Venezuela, although right now they distance themselves from the war discourse to safeguard their political capital. But the certain thing is that, if a war starts in Venezuela, a quake would happen in regional policy, the critical matrix of right-wing forces would be increased, enabling an advantage to other forces of the left and other social democratic ones, to shake up parties in governments.

The spiral that would derive from a war in Venezuela would cross politics between allied right wing factors or adversaries of the intervention, leaving a broad argument that would be very useful to accelerate the delegitimization of the current right-wing governments in power in several countries, some of them with quite flimsy political foundations.

The real humanitarian crisis: since the war in Afghanistan it has been shown that the conflicts of this mmoment tend to be protracted. An asymmetric war in Venezuela would have that denomination, since there are elements that make up the military defensive structure of Venezuela that suggest a “lightning war” would be impossible. It is also true that in this type of war, the internal and external displacement of the population would be at least 40% of the population due to the worsening of a full-spectrum crisis: lack of services, hunger and insalubrity.

DOES THE UNITED STATES WANT A NEW MIDDLE EAST IN ITS “BACKYARD”?

According to a report by the United Nations High Commissioner for Refugees (UNHCR), that has been the case in Afghanistan, Iraq, Libya and Syria. According to VoxEU , following data from UNHCR, 54% of Syrians have been displaced. The possibility of a war in Venezuela would displace at least 12 million people inside and outside the country. A figure of astronomical dimensions for this part of the world.

A conflict in Venezuela would open refugee camps in the country, but also outside it. The neighboring governments would be obliged to try to contain a huge human displacement, probably of at least 7 million people who would join the economic migrants who have left the country. They would have to manage such a crisis with the methods that European countries know how to apply; opening refugee camps would then be a difficult, manageable, logistically and politically costly affair. The Caribbean Sea could become another Mediterranean, and even the dimension of the tragedy of deaths by drowning could be greater, under the understanding that Europe deploys an organization and logistics of maritime supervision and control, and that such capabilities do not exist in the Caribbean Sea.

An epicenter of instability regarding security: it is essential to analyze the consequences of a violent attack against Venezuela, if successful. A multivariable asymmetric war would mean the massive insertion of weapons into the country, but also the at least partial fragmentation of the regular Venezuelan forces and their arsenal. A huge amount of weaponry of at least 500,000 weapons in the hands of the army, the Navy, the Bolivarian National Guard (GNB) and the Bolivarian militias, which could fall into the hands of members of diffuse sides of the conflict. Weapons susceptible to moving into the black market to distribute themselves into the hands of terrorists, members of organized crime and insurgents in the region and other continents.

On this item, it is worthwhile to settle on an example. This lies in one of the components of the Venezuelan anti-aircraft system of three levels and that has the IGLA-S missile launcher, made in Russia, for anti-aircraft defense at low altitude, up to two kilometers in height. It is a device available by thousands in the Venezuelan army. In fact, the Venezuelan Company of Military Industry (CAVIM) designed a Venezuelan version for the FANB, the IGLA-VE, with a size very similar to that of its Russian predecessor. This device, also portable, follows the heat traces of any aerial device, but it also has the ability to guide itself directly towards the target by avoiding flares via software in the rocket launcher.

This artifact is of extreme importance. In fact, the United States has not provided similar instruments to mercenary forces that it has deployed in Syria, precisely because of the risks that result from this weapon falling into irregular hands. Regional aviation security would be at great risk and any civilian aircraft could be an extremely vulnerable target against these devices in the wrong hands.

These risks are fully known by the US military gendarmerie that continues to boost a war in Venezuela. However, the intervention remains as an option at the table. This implies that what is being discussed is not only the possibility of a war in Venezuela, but also the possibility of developing a conflict focus that, as an expansive wave, could compromise the strategic security of the region, thus expanding the US presence and the total deployment of its institutional infrastructure. Does the United States want a new Middle East in its “backyard”? That’s a great question.

The alleged withdrawal of the United States from Syria and the possibility of signing an armistice with the Taliban in Afghanistan – evidently without having defeated them – would momentarily de-escalate the US presence in the “shooting range” that has been that region in recent decades. But the US military industrial complex, a causal and central factor in the military expansion and wars that the country has undertaken, remains intact as a modulating factor in US policy and may be considering opening another large-scale conflict front in Latin America.

Ultimately, to subjugate the nation-states, which is the beginning and end of US strategic policy, has had a polyvalent factor in war.  War has been a component of the perpetual confrontation of the United States with the world, and for that reason it has been consecrated as a hegemonic and dominant factor in international relations for a century.