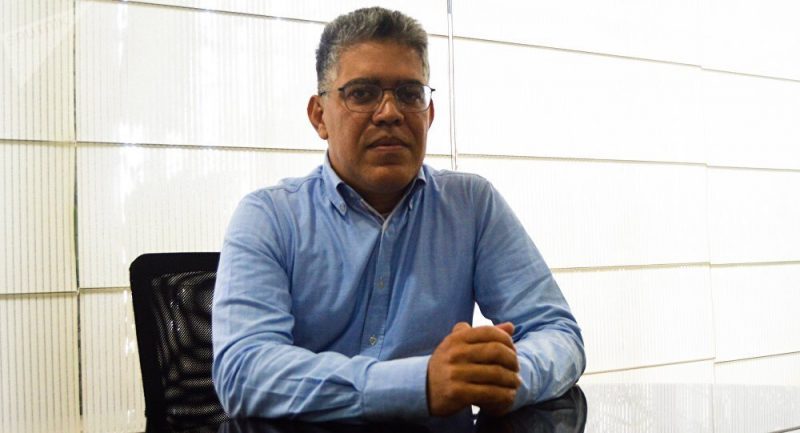 INTERVIEW: Recently twenty years have passed since the first electoral victory of Hugo Chávez in Venezuela. That event inaugurated the process of the Bolivarian Revolution, and also opened the doors to one of the greatest sieges that any political project has faced.

At the gates of 2019, we wanted to hear the opinion of Elías Jaua, a representative leader of that Revolution, to make a balance of these two decades and evaluate the great challenges that the South American nation will face in the immediate future.

Jaua has been Vice President of Venezuela, the Chancellor, Secretary of the Office of the President [equivalent to Chief of Staff] and has held head positions in various ministries such as Agriculture and Lands, Popular Economy and Education. He was a close collaborator of President Chávez and also of President Nicolás Maduro.- A few days ago he published a tweet, in which he said that he was reading Comandante Chávez about the victorious campaign on December 6, of that year 1998. He recommends to “return to the spirit and mystique that led us to the victory” of 1998. How does that spirit and that mystique translate into concrete political actions? Chávez did not win only with the MVR [his political party at that moment], Chávez won in 98, with a great patriotic and popular alliance. That would be the first element, we must meet the people at the base, and we must call a great alliance of all social and economic factors that oppose the aggression we are experiencing. I believe that regarding social equality, it is fundamental to advance in the gap that the economic war has caused. Once again, we can see an elite with a high purchasing power and an immense majority impacted in their daily lives, in their food, in the services, product of these five years of total war. And this can be done through a progressive taxation strategy, effectively implemented and with laws developed to punish the accumulation of wealth and to ensure equal distribution as we had achieved, until all this conflict [economic war] was generated.

It is also essential to summarize the spirit and desire for a more honest society. Today, more than ever, Venezuela requires the dismantling of all the mafias that, as part of the destabilization, have occupied the economic life and a good part of the institutional life of the country. I think that would express the spirit of the year, 1998. – An article of opinion of your authorship titled “Inversiones Sí, Despojo No” [Investment Yes, Spoliation No], has been widely commented on. One of the points, perhaps the most controversial, is where you will resolve the issue of the functioning of the National Assembly (Legislative Branch), taking as reference the mechanism agreed upon at the dialogue and negotiation table, earlier this year in the Dominican Republic negotiations, or through the call for popular sovereignty for the election of a new Parliament.” Could you elaborate? – Do you think that there is political will from both the Government and the opposition to advance an agreement of this type? – A few hours ago a private meeting of the so-called Boston Group was held in a well-known capital hotel, which is defined as “a friendship group that was born from the Interparliamentary Commission between Venezuela and the United States in the years 2000-2005”. It is considered that in this meeting different strategies of rapprochement with the national government were debated in order to reestablish the political dialogue with factors of the opposition. Do you think that the conditions are in place for 2019 to be marked by a deep dialogue and not by confrontation?

– The economist Luis Enrique Gavazut, in an article called “The first victim of economic war can not be the truth” writes the following: “There can be no democracy or freedoms if there is no truthful information, if there is no transparency before the entire Nation. If there is not enough public dissemination of that information, nobody defends what he does not know … and nobody opposes it either “. What is your opinion of this reflection? – Just before arriving at this interview, I read that the leader of the Primero Justicia Party, Julio Borges, had sent a letter to the Bank of England asking them not to deliver the gold reserves that belong to the Venezuelan people. These actions do not seem to pave the way for a political dialogue. Are there within the opposition factors that can and are willing to contribute to a true national dialogue? – In different public addresses you have declared that the call for the conformation of the National Constituent Assembly (ANC) was made to stop the possibility of a civil war in Venezuela. When more than a year has passed since the Assembly was installed, what is the balance you are making? – Some hours ago, Chilean Foreign Minister Roberto Ampuero, declared that several countries of the region “intend to break relations” with the next government of Nicolás Maduro that would start a new period on January 10, 2019. In addition, he said he had “the impression” that the pressures against Venezuela were going to increase. What do you think about the media trend that is beginning to be formed around that day?

– What do you say to those governments that have been sworn in against Venezuela? – Are you afraid that the economic crisis could give rise to an effect like the one that led Bolsonaro to the Presidency of Brazil? – You were Vice President and Chancellor, you have had the opportunity to make great strategic views around the country. What are the major challenges that the government of Nicolás Maduro will face in 2019? – During the Congress of the United Socialist Party of Venezuela (PSUV) that ended a few months ago, you publicly advocated that the party’s authorities be chosen by the rank and file. However, that did not happen. How do you perceive the future of this organization? The PSUV must advance from being a party for electoral purposes and become an organic party for the Revolution, and that requires to have the ability to create a system for training its cadres in the Bolivarian Socialism. A party that is capable of promoting the emergence of leadership from the grassroots, gradually occupying the functions that we the old cadres have occupied over these twenty years. A party, as Commander Chávez said, to accompany the people in their daily battle, a party that is in the struggle of the workers, that is in the struggle of the communities for the preservation of the environment, a party that is in battle against the remnants of capitalism that still persist in Venezuela, latifundia, speculation, the exploitation of the workers, in short, a revolutionary party linked to the struggles for the transformation of society, and linked to the struggles , the demands and aspirations of the Venezuelan people. That is the great challenge of the United Socialist Party of Venezuela, if it wants to become a revolutionary party for the future.

-During the interview, the words alliance, articulation of forces, reunification have emerged. Do you think that the different people who accompanied then President Chávez, can contribute with their experience in the Administration of President Nicolás Maduro? – The exercise of power and compliance from the different bureaucratic positions always generate their affections, but they also give origin to detractors. You were Minister of Agriculture and Lands. What do you have to say to those who criticize your management within that sector? What do you think was done well? What was left to do? In Venezuela we came to produce 3 million tons of cereals, when in the last years of the fourth republic, that amount had never been produced. So the agrarian policy of Comandante Chávez, which I had to execute and for which I assume responsibility for the good and the mistakes that could have been made, was successful. In terms of food production there is no way to lie, there is or there is no food, and here from 2008 to 2012, there was no type of food shortage. There was national production with self-supply in rice, corn, and coffee, and all the items were grown and strictly necessary imports were made. That was a key element for the success of Comandante Chávez’s agrarian policy, importing only what is needed. In Venezuela, historically, importation has been the way oligarchy and corrupt bureaucracies have appropriated the oil rent, therefore it was a great battle. I had to fight that battle, not only against the latifundio, but against the import oligarchy, and that was the hardest. And maybe, those are the ones that generate the matrix of the failure of the agrarian policy, because we hit them where it hurts.

– Could you trust us with something that President Chávez told him and that would help him to face the years after his physical departure? Maybe people do not even ask that leaders live what they live, but they do ask us to know what they are experiencing right now. That I think is the greatest teaching of Hugo Chavez: Always put yourself in the place of the people, not in our own perspective, or in what we believe, or in self-satisfaction, but in what our people aspire, dream and build.

– Any message for Venezuela?