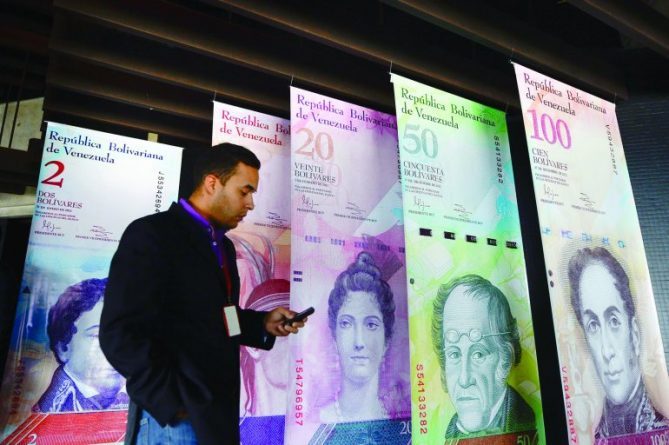 The Central Bank of Venezuela (BCV) broke this week the silence on the main economic indicators of the South American country, and amid the figures that confirm the deep recession, a fact was ignored in the headlines of the international press: in April, the The National Consumer Price Index (INPC) stood at 33.8%.

In fact, that figure is below the record of last March, which stood at 34.8%, with which the inflationary index returned to double digits in the monthly variation, after January and February closed at 196.6% and 114.4%, respectively.

Long before the disclosure of the figures of the issuing body, private economic firms advanced a “brake” in the accelerated hyperinflation process, while the National Council of Trade and Services of Venezuela (Consecomercio) confirmed the “lag” of prices in various products and services.

A reflection of this phenomenon was the item ‘non-alcoholic foods and beverages’, detailed in the monthly variation of the BCV so far this year: in January it climbed to 204%, and in April it dropped to 29.3%. Something similar happened with the measurement of hotels and restaurants, which went from 238.3% in January to 38% in April.

How did it happen?

For the economist and former Minister of Foreign Trade, Jesús Faría, one of the factors that affected the hyperinflationary speed was the speculation in the illegal purchase and sale of foreign currency (black market).

However, he remarked that this scenario changed when the BCV authorized the purchase and sale of dollars for private banks through foreign exchange desks (FED), whose transactions include daily reports of operations, which then the issuing body averages and publishes as an official rate.

In Faría’s opinion, this measure has allowed the BCV to stop the illegal mark up of the price of the parallel dollar, a “repeated excuse of the merchants” to raise prices.

“What we are observing in recent months is the State’s effort in the application of new macroeconomic policies that were needed” to balance the market, he adds.

Another key aspect is the legal reserve applied to the banking system. The current measure obliges the bank to freeze part of the deposits in the BCV as a reserve. This limits the excess liquidity (bolivars), helps to “stabilize” the illegal price of the black market dollar, and prevents the indiscriminate rise in prices.

A government report, quoted by La Iguana, points out that the implementation of the reserve mitigated “the increase in monetary liquidity” and has allowed the “consequent deceleration of hyperinflation”.

You can not declare victory

Although the cold hard numbers point towards a progressive slowdown in hyperinflation, someone who earns a minimum wage in Venezuela can not yet claim victory, since the limitation of circulating money, added to the galloping speculation in “dollarized prices” and the hoarding of basic products for its resale to double or triple its original cost, still hits with force the purchasing power of the population.

Although some prices have not increased with the same proportion of 2018 (year in which accumulated inflation was 130,000%), the basic remuneration set at 40,000 bolivares per month, seven dollars at the official rate, is insufficient to acquire the majority of priority items.

“It is a regrettable consequence of the momentary slowing of hyperinflation: there has been a significant loss of workers’ income,” says economist and social researcher Oscar Forero.

The economists consulted believe that trying to stop hyperinflation is one of the key steps that the Executive has been taking for the “reordering of the market”, but it should not be the only one. Other measures are lacking to recover national productivity and purchasing capacity.

Forero adds that one of the aspects that currently raises the costs of the products is the availability of fuel, which directly impacts the movement of food and other products.

“In Táchira and Mérida (Andean region) due to the difficulty of obtaining gasoline, the merchants who move goods to the center or east of the country add to the final price what they pay in fuel,” says Forero.

Objective: not to lose the advances

The president of Venezuela, Nicolás Maduro, reported late last year that one of the purposes of his government in the first half of 2019 was “to stop inflation.”

With only a few days left to say goodbye to the first six months of the year, Faría believes that the goal is to maintain the inflationary slowdown achieved so far.

However, US sanctions against Venezuela threaten to boycott that achievement. “Undoubtedly, the US blockade has accelerated the collapse of the Venezuelan economy,” says Forero, who believes that without the actions of Washington the hyperinflationary process “would not be so profound” at present.

According to Faría, the unilateral coercive measures applied by Washington against Caracas is the “economic weapon par excellence to cause hyperinflation.”

He details that the blockade, according to official estimates, has cost the country more than $ 65,000 million: “These are resources that the country was not able to use to meet the needs of the population and reduce the inflationary impact.”

This figure is added to the losses of 350,000 million dollars in production of goods and services, between 2013 and 2017, equivalent to 8,400 and 12,100 dollars for each Venezuelan, according to a study published by the Latin American Geopolitical Strategic Center (Celag) .

Even with this uphill panorama, the Executive has said that the following months “will be key to recover little by little the economic activity of Venezuela,” according to a document reviewed by local media.

For now, the focus is on the fact that the hyperinflation figure at the end of 2019 does not culminate in the calculation of 10,000,000% made by the International Monetary Fund (IMF). Or that at least the trend continues to fall for the benefit of the entire country: “I think it can be achieved, despite the sanctions,” predicts Faría.