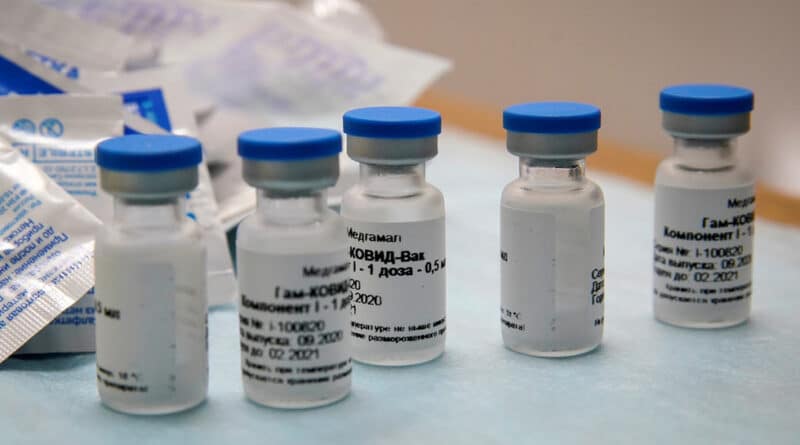 November 23, 2020.-  While three vaccines have been lauded internationally for their promising clinical trial results, a Russian produced one is being dismissed by the MSM. So much for the unified ‘global response’ to the pandemic…

At last, there appears to be some light at the end of the gloomy Covid-19 tunnel, as Oxford University’s vaccine looks to be a success. Initial data suggests 70 percent protection, but experts reckon by tweaking the dose, it could reach 90 percent.

It’s a collaboration with drugmaker AstraZeneca and of those treated with it during trials, there were no hospitalisations or severe cases of Covid-19.

Another bonus is that it can be stored in a normal fridge, meaning the costs involved are relatively small.

That’s not the case with the other two internationally hailed vaccines; BioNTech/Pfizer’s with an efficacy of 95 percent, slightly better than Moderna’s 94.5 percent.

They both need to be stored at temperatures around minus 70 degrees Celsius, and require large refrigeration units to keep them from spoiling in travel and the pre-adminstering phase.

That’s one reason why the Oxford vaccine will cost between $3-4 per shot, compared to $20 for Pfizer/BioNTech and $25 for Moderna.

But even with the price differences, it’s all good news.

AstraZeneca is reported to have agreed to make two billion doses by next summer – and the others have deals to deliver hundreds of millions of their solutions.

It’s been a global effort. AstraZeneca is a Swedish company, BioNTech was founded by a married Turkish couple in Germany, while Pfizer and Moderna are both American.

Similarly, the reaction to the good news has been universally positive.The statement from Oxford University’s team was hailed by the BBC, The New York Times, CNN, The Guardian, 9News in Australia and Sky News.

Despite their different locations and target audiences, all these reports had one thing in common – they deliberately ignored Sputnik V, the vaccine developed by Russia and the first to be announced. That’s a fact.

It was on August 11 that news broke of its existence and on September 4, the results for phase 1/2 studies were publishedin the world’s oldest medical journal, The Lancet. Phase 3 trials are underway in Russia, Belarus, the United Arab Emirates and Venezuela, with both India and Brazil set to join, too.

Sputnik V has a 92 percent effectiveness based on the data and the World Health Organization’s representative to Russia, Melita Vujnovic commented, “certainly, we are optimistic.”

The vaccine has also been sent to WHO headquarters in Geneva for certification and its maker, the Moscow- based Gamaleya Research Institute of Epidemiology and Microbiology, has confirmed the cost will be lower than Pfizer/BioNTech and Moderna.

Translating pharma lingo: the announced price of Pfizer of $19.50 and Moderna of $25-$37 per dose actually means their price of $39 and $50-$74 per person. Two doses are required per person for the Pfizer, Sputnik V and Moderna vaccines. The price of Sputnik V will be much lower. https://t.co/nr1C7RBdZB

It has also made a public offer to help boost the Oxford/AstraZeneca vaccine’s effectiveness. You probably aren’t aware of this, though, as all of that has remained absent from the mainstream media.

There have been suggestions of supposed evidence that Russian researchers falsified the Sputnik V data, driven, possibly, by the fact that the Russian Direct Investment Fund (RDIF) has funded the project.

It’s a sovereign body, so its money comes from the Russian government.

CEO Kirill Dmitriev was aware the state links would be seen as some as an issue, and said: “We understood that there would be lots of scepticism and resistance to the Russian vaccine for competitive reasons; therefore, there was a decision to call it a Russian recognisable international name.”

The narrow-minded zealots should instead look at the Gamaleya Institute, which was involved in clinical trials previously for Ebola and Middle East respiratory syndrome vaccines. But none of that has been deemed relevant.

Some journalists and media corporations are blinkered, possibly subconsciously, when it comes to viewing certain parts of the world. It’s an arrogant attitude that means the Russian claims have been pre-judged with a suspicion which has not been applied to the other vaccines.

Inexplicably, Wayne Koff of the Human Vaccines Project stated that the Sputnik V results didn’t pass “the smell test.”Meanwhile vaccine researcher John Moore, of  New York’s Weill Cornell Medical College, referred to the announcement as “Putinology”and added: “Why is Russia doing this? It’s the international vaccine race. They want to be seen to be keeping up with their competitors in other countries.”

The European Union also displayed its true colours by warning Hungary it was undermining public confidence by importing Sputnik V to test it. The EU added that it would become “much harder” to carry out mass inoculations, if citizens began to question vaccines because they were not approved. And France 24 threw out the innuendo-laden line “Moscow rushes to keep pace with Western drugmakers.”

All of this stems from lazy stereotypes and in some cases, an illogical disdain for Russia leftover from the Cold War era.

This is a global pandemic. Every country is facing the same scenario, and we need all the scientific help we can get. Nothing should be dismissed because of xenophobic paranoia.

The MSM’s airbrushing of Sputnik V proves the so-called experts can’t allow themselves to give any credit to Russia, as it doesn’t fit the narrative they want to convey.

What if it’s the most potent vaccine we’ve got? What if it is the best option? It’s baffling that so many are playing agenda-laden infowars, when so many lives at stake.

Featured image: Bottles with Russia’s “Sputnik-V” vaccine against the coronavirus disease are seen before inoculation at a clinic in Tver, Russia October 12, 2020. © REUTERS/Tatyana Makeyeva