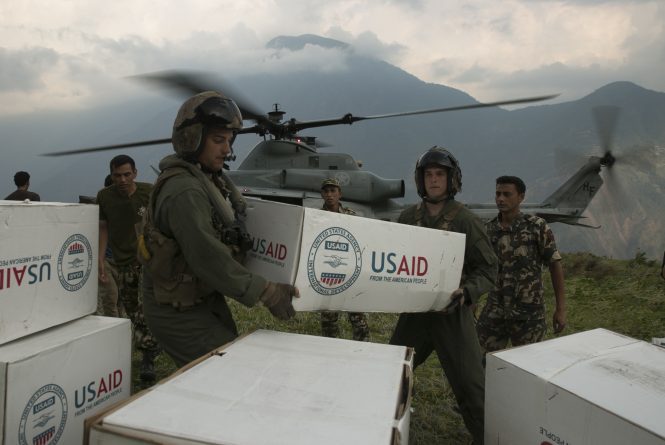 The mainstream media is full of images and stories of Venezuela’s inhumanely authoritarian leader Nicolás Maduro pushing American offerings of humanitarian aid away from Venezuela’s border with Columbia.

The mainstream media serves us up our offerings of news as if each headline story was an isolated event, floating alone on an historical sea, unmoored from the events that came before it. Severed from its causes and context, the event can be created for the public in an original, but misleading, way. Restoring the history can clarify the story and prevent its misappropriation.

In the current case of U.S. aid to Venezuela, the restoration of the picture requires at least four pieces of history being painted back into the picture.

The story of Maduro’s neglect of his people and his rejection of American aid begins on the Francisco de Paula Santander bridge that connects Venezuela to Columbia.

US officials and the mainstream media cried the same complaint in unison. America had tried to deliver humanitarian aid to the people of Venezuela, and their illegitimate ruler had blocked the bridge and kept it out. But the cry and the photos of the bridge had been manipulatively severed from history. Maduro didn’t block the bridge because it was already blocked, and he couldn’t close the bridge because it had never been opened. Most of the barriers have been there for years because, after the bridge was built in 2015, it has never been opened.

And yet, that image of a stone hearted Maduro was used to cement public opinion against him. The images join a long history of pictures being presented out of historical context to mold public opinion and justify intervention.

The chorus of cries and photographs later went on to claim that Maduro’s national guard had set the aid trucks on fire. But as the event on the bridge had been severed from the history that came before it, so the picture of the burning trucks had been presented in the media severed from the pictures that came before it. As Max Blumenthal has reported, footage, photographs and video taken before the photographs of the burning trucks seem to clearly prove that the aid trucks were set alight by the masked and violent members of the opposition.

Why would Maduro resist humanitarian aid from American organizations like USAID? For the same reason the Red Cross and the United Nations are.

The US is not offering to coordinate aid with organizations working within Venezuela. Maduro has proven very willing to work with aid organizations working in Venezuela. The United States is offering to parachute aid in over the head of Maduro to discredit him and give credit and credibility to the self-declared government of Juan Guaidó. Or, if the aid fails to get in, to paint Maduro as the heartless dictator who chose hanging on to power over feeding his people.

It is for this reason that, not only Maduro, but many international aid agencies have refused to approve of, or participate in, the aid operation. “The United Nations warned . . . against using aid as a pawn in Venezuela after the United States sent food and medicine to the country’s border and accused President Nicolas Maduro of blocking its delivery with trucks and shipping containers.” U.N. spokesperson, Stephane Dujarric added that “Humanitarian action needs to be independent of political, military or other objectives.”

RELATED CONTENT: Red Cross Denounces Unsanctioned Use of its Emblems to Smuggle US “Aid” to Venezuela

The Red cross agreed, saying that “the initiative organized by the Venezuelan opposition is too political.” Caritas, the humanitarian arm of the Catholic Church, also refused to participate in the aid campaign.

But there are other historical reasons for being suspicious of USAID as an agent of humanitarian help that need to be edited back into the picture. USAID and other related organizations have long played a role in fomenting and financing coups in Venezuela, Latin America and around the world. Between 2002 and 2016, at least $90 million from US has poured into Venezuela. A May 2010 report found that the Venezuelan opposition was receiving $40-50 million a year from European and American government organizations, including USAID, for “political activities,” including coup attempts, economic sabotage and funding of opposition electoral campaigns.

The United States publicly boasted that, leading up to the Ukrainian coup, it had invested over $5 billion dollars through organizations like USAID and the National Endowment for Democracy (NED).

More recently, and more locally, the NED and related organizations have been revealed to have spent over $4 million “laying the groundwork for insurrection” in Nicaragua.

Venezuelans and the people of Latin America remember this because in 1986, Nicaragua was the recipient of just such an operation. They have learned to beware of Americans bearing gifts.

In 1986, the Reagan Administration snuck military aid to the Nicaraguan contras by cloaking it in humanitarian aid. Decisions on the secret weapons program were made by a special group that included then Assistant Secretary of State Elliott Abrams. On one known occasion, the US flew humanitarian aid to Honduras. The plane then flew to El Salvador where it picked up seven tons of weapons that were airdropped into Nicaragua. At least twice, the US flew “mixed cargoes” on planes that were carrying weapons mixed in to the cargo of humanitarian aid.

Elliott Abrams later “defended his role in authorizing the shipment of weapons on a humanitarian aid flight to Nicaraguan rebels, saying the operation was ”strictly by the book.” Abrams was responding to “statements by Robert Duemling, former head of the State Department’s Nicaraguan humanitarian assistance office, who said he had twice ordered planes to shuttle weapons for the contras on aid planes at Mr. Abrams’s direction in early 1986.”

That same Elliott Abrams is now the US special envoy for Venezuela.

But using humanitarian aid to smuggle money and weapons into countries did not start in Latin America, and it did not start in 1986. That covert strategy goes back three quarters of a century to the beginnings of the CIA and the end of the second world war. The Marshall plan was promoted as a plan to rebuild Europe after World War II to seal it against communism. But, as explained by CIA expert John Prados in his book Safe for Democracy, the CIA used that humanitarian aid vehicle to hide the source of money being poured into Europe for propaganda and political actions. From 1951 to the closing of the Marshall Plan in 1952, at the request of Frank Wisner, the head of CIA covert operations, Marshall Plan funds were diverted for covert programs. Prados says that several organizations have been used, or set up, by the CIA to funnel funds and that the CIA’s role is often concealed by funneling money through legitimate foundations.

And it wasn’t only happening in Europe. In another early Trojan Horse operation that looked a lot like Nicaragua, the US used humanitarian aid planes to drop weapons into Laos. In the 1960’s, “hard rice” was a euphemism for military supplies that were disguised as food. According to Prados, in his book The Ghosts of Langley, weapons were flown into Laos on humanitarian aid planes flown by Air America. Air America pilots developed the cynical code word to distinguish their legal cargo from their illegal cargo: “soft rice” meant food and “hard rice” meant arms.

The creation of the need for humanitarian aid and the violent events on the Francisco de Paula Santander bridge are not scenes that emerged without a historical context: they are not the first scenes in the opposition’s coup script.

The authors of that script recognize that the creation of instability and crisis in the streets can be offered up as a justification for foreign humanitarian intervention. The humanitarian crisis that led to the dramatic staging of the violence on the bridge that led to four deaths follows a scrip that was written for Venezuela years ago.

In June 2013, a document entitled “Strategic Venezuelan Plan” was authored by the former President of Columbia, Alvaro Uribe’s Democratic Internationalism Foundation, the First Columbian Think Tank, the US consulting firm FTI Consulting, leaders of the Venezuelan opposition and – you can add this to the argument about why Maduro shouldn’t trust USAID – the Director of USAID for Latin America. The plan’s intent is to destabilize Venezuela in order to “facilitate an opposition victory.” In order to facilitate the change in government, the plan says to “Create situations of crisis in the streets that will facilitate US intervention, as well as NATO forces, with the support of the Colombian government.” The plan tacks on the line “Whenever possible, the violence should result in death or injuries.” It did.

But the script being followed in Venezuela is even older than that. Dan Cohen and Max Blumenthal have reported that in October 2010, according to emails obtained by Venezuelan security services, several student activists attended a secret five day training at the Fiesta Mexicana hotel in Mexico City. Among the student activists was a young Juan Guaidó. The sessions were run by Otpor, Belgrade-based regime change trainers who are backed by the US government. Organizers of the meeting included Otto Reich, a former US ambassador to Venezuela and later the leading State Department official for Latin America under George W. Bush, and former Colombian President Alvaro Uribe.

According to the emails, during those sessions, Guaidó and his fellow activists developed a plan to overthrow President Hugo Chavez by generating chaos through protracted spasms of street violence.

Like the pictures of the Francisco de Paula Santander bridge, the history of USAID, and the use of humanitarian aid as a Trojan horse for weapons, restoring the history of a planned strategy of creating crises in the streets to justify US intervention and regime change produces a picture of Maduro refusing American humanitarian aid that is very different from the picture presented by the Venezuelan opposition and US officials and dutifully repeated by the mainstream media.

Ted Snider writes on analyzing patterns in US foreign policy and history.