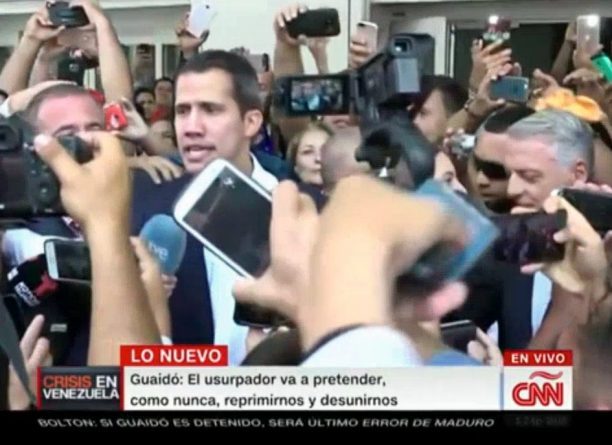 Venezuelan deputy Juan Guaidó returned to Venezuela on Monday, as he announced earlier, entering Simón Bolívar International Airport, in Maiquetía, Vargas state, about 45 minutes from Caracas. Guaidó was not arrested, and he entered the country normally, being received by a multitude of supporters and by the ambassadors of Germany, Portugal, US and the Netherlands in Venezuela.

On January 29, the Supreme Court of Justice of Venezuela had issued a ban on the opposition deputy leaving the country, while a preliminary investigation was carried out for crimes against the Constitution. However, Guaidó left to Colombia through “trochas” (dirt roads) on February 22, where he led a failed operation to introduce alleged humanitarian aid into his country , which was denounced by the Government of Nicolás Maduro as a veiled way to initiate a military intervention against Venezuela .

Later, Guaidó traveled from Colombia to Brazil, Paraguay, Argentina and Ecuador, where he was received by the presidents of those countries. On March 1 he announced that he would return on March 4 to Venezuelan territory.

“We are here in Venezuela, we are moving forward,” Guaidó told the media from the Maiquetía airport on Monday, while on his Twitter account he added : “We entered Venezuela as free citizens, and nobody tells us otherwise.”

Later, after conducting a caravan in the State of Vargas, he went to a rally of his followers in the Plaza Alfredo Sadel (Las Mercedes), in eastern Caracas, where he reported that he would convene a meeting with unions of public institutions next Tuesday, and called for new demonstrations for this Saturday. He assured his followers that his not being arrested indicates that there is a supposed “rupture” in the chain of command.

On the other hand, the Venezuelan analyst and journalist Víctor Hugo Majano explained that there is no arrest warrant against Guaidó issued by public institutions, for which “he can return to the country wherever and whenever he wants.” He explained that, in Venezuela, a person can only be arrested if there is a judicial order against him or if the person was committing a crime at that moment (in flagrante delicto). In addition, the deputies have parliamentary immunity and the condition of flagrancy of a presumed crime must be determined by the TSJ, explained Majano on his Facebook wall.

“All the laps he has taken and the threats that his sponsors and he himself have expressed, what they do is confirm his fear and an immense cowardice,” said Majano.

Currently, there is a preliminary investigation carried out by the Public Ministry to “continue collecting enough elements of conviction to stop the acts that, since January 22, have damaged the peace of the republic, our economy and the national heritage,” as explained by the Attorney General, Tarek William Saab, on January 29 .

In spite of that, different chavista political spokespersons had anticipated a possible detention of the deputy upon returning to the country, which caused expectations and threats from the US government .

Venezuelan President Nicolás Maduro accuses the US government of organizing an attempted coup on January 23, when the deputy from the Venezuelan opposition, Juan Guaidó, proclaimed himself “president in charge” of the country, and was supported immediately by the government of Donald Trump, who was joined by some countries in Latin America and Europe. Russia, China, Cuba, South Africa, Bolivia, Iran, India and Turkey, among other states, support the Maduro Government.