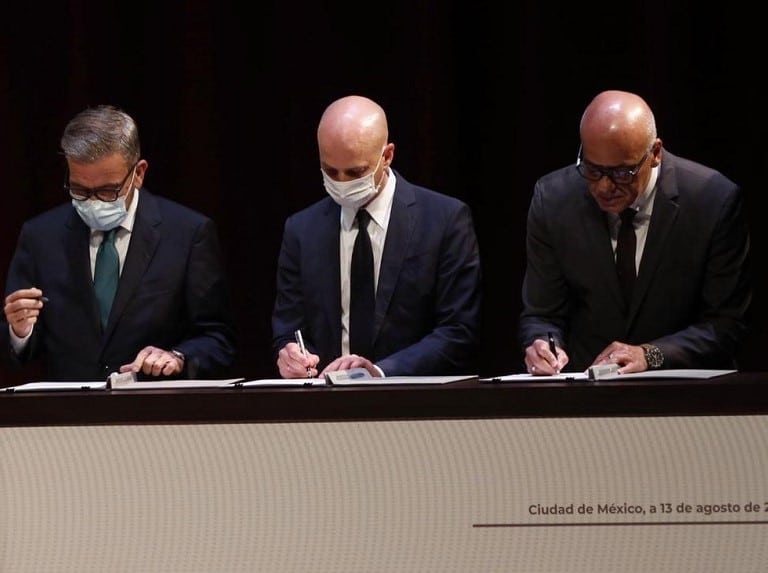 Jorge Rodríguez representing the Venezuelan government, Gerardo Blyde representing the opposition, and the representative from the Kingdom of Norway, all signing the document that officially launched the Mexico Talks in 2021. File photo.

After the government of Venezuela withdrew from the Mexico Talks with the opposition due to Washington’s kidnapping of Venezuelan diplomat Alex Saab, the opposition sectors are now coordinating with the Vatican and the United Nations (UN) for the participation of a group of “friendly countries” during the negotiation process, if it is resumed.

The announcement was made this Thursday, February 3, by the head of the opposition delegation in Mexico, Gerardo Blyde, who explained in an interview with the news outlet Analitica.com that, although the dialogue has not been resumed, work is being done to install the group, which should be balanced. The idea of ​​this plan is that friendly countries will act as guarantors of the process.

“We have had some problems because we have more countries requesting to join than slots avaliable,” Blyde said. “This has impressed me. The idea is to have 10 countries and to have it coordinated by the Vatican and the UN. We are working on that, and I think by the time it’s resumed we will have it figured out.”

As for the suspension of the dialogue, Blyde said that the result “wasn’t good.” He said that the two sides had only reached two agreements that could not be materialized. The first has to do with the Essequibo territory (disputed between Venezuela and Guyana) and the second is about a social care board. He asserted that the negotiations could bring peace and prosperity to the country, without mentioning that both of these have been achieved in recent months without the “help” of the opposition.

The negotiation between the Venezuelan government and the opposition started in Mexico in August 2021, and was suspended in October after the illegal extraction to the US of the Venezuelan diplomat Alex Saab.

Conditions must be met
At the beginning of this year, Jorge Rodríguez, president of the National Assembly (AN) of Venezuela, who headed the delegation of the Venezuelan government in the Mexico Talks, demanded the release of Alex Saab in order to resume the dialogue, adding that the process was halted a few days after the illegal extraction of ambassador Saab from Cape Verde to the United States.

Likewise, the first vice president of the United Socialist Party of Venezuela (PSUV), Diosdado Cabello, ratified the position announced by the Venezuelan president, Nicolás Maduro, that the Venezuelan government will not return to talks with the opposition, unless some conditions are met, especially the release of Ambassador Saab kidnapped by the US regime just because of his work to bring into Venezuela food, medicines and inputs for the oil industry, evading the illegal and criminal sanctions imposed by Washington and the European Union.

Appointment of Supreme Court Justices
In the interview, Blyde said that he hopes that the dialogue will resume “before the process of judicial nominations progress further.”

“I would ask them [the government] to reflect, that we return to Mexico,” Blyde said, “that we return to the negotiation, that they stop this process [Supreme Court appointments] a bit, that we propose to the country a different conception of the judicial system, not imposed unilaterally, that is also in harmony with the Constitution, with a Nominations Committee that is not colonized by political power, and then we can produce agreements that can create an independent justice system in Venezuela.”

Featured image: Jorge Rodríguez representing the Venezuelan government, Gerardo Blyde representing the opposition, and the representative from the Kingdom of Norway, all signing the document that officially launched the Mexico Talks in 2021. File photo.