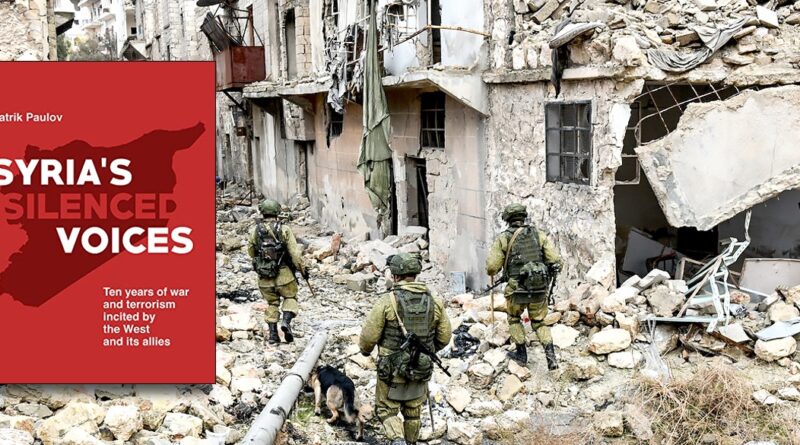 Ordinary Syrians have a different take from Western commentators on the events of 2016 when Aleppo was retaken by government forces. Patrik Paulov reports

WHAT happened when the Syrian army took control of eastern Aleppo five years ago? Was there a massacre with 50,000 victims? Did Putin and Assad wipe out the city?

The Swedish peace researcher Jan Oberg, head of the Transnational Foundation for Peace and Future Research, was present in Aleppo in December 2016.

An emotional taxi driver told him that the liberation of eastern Aleppo was one of the three biggest events of his life. The others were the day he got married and his pilgrimage to Mecca.

This is what Jan Oberg reported on janoberg.exposure.com: “Overwhelming human happiness after four years of what many called ‘hell under the terrorists.’ I saw smiles and pride and victory signs…

“I joined people in restaurants in the west who were celebrating, toasting to freedom and talking with relief about how fantastic it was to finally not have to live in fear every day; they had been hit now and then too by rebel mortars and other ammunition in that side of town, something I experienced myself during my visit.

“And I saw victims of this occupation in the east get bread, vegetables, bananas and water. [Some] sitting in chairs at the pavement and enjoying tea and a cigarette. And talk without fear.

RELATED CONTENT: Syria’s My Lai? US Massacred 70 Civilians and Covered it up

“Finally, I heard people express their disagreement with Assad’s amnesty policy. If you are a Syrian citizen and have been out fighting against your own you will be granted amnesty if you hand in your weapon, answer some questions and then sign a paper that you’ll never do it again. That’s all. You can be reintegrated in society again. Only if you have a court case against you, say by a family, a member of whom you have deliberately killed, you’ll be punished.

“What several — civilians as well as soldiers — told me was that they did not agree with this soft, reconciliatory philosophy of their president. Some said that legal processes were necessary and Syrians who had fought against their own people and participated in the occupation of eastern Aleppo deserved to be punished…

“Oh, yes, and I saw lots of Syrian youth, university students in particular, volunteering for the Red Crescent and helping people in this dire situation.”

Oberg went on to say that he did not meet anyone who was happy with life in eastern Aleppo, where the children had not been allowed to go to school for two years. He did not see any member of the White Helmets, and did not meet a single resident who had been assisted by them.

Of course, not everyone would agree with this description. One reason why critical voices were not noticed by Oberg was that they had left the area.

Those living in eastern Aleppo had a choice: either evacuate to government-controlled parts of Aleppo or be bussed to areas under the control of armed groups.

At a press conference on January 11 2017, Stephane Dujarric, spokesman of the UN secretary-general, said that the UN had assisted nearly 150,000 people in eastern Aleppo.

Of those evacuated, 111,000 had chosen to enter areas under Syrian government control, while 36,000 preferred to leave the city and go to “opposition areas” in the countryside or to Idlib province.

Less than 25 per cent chose continue to live under the rule of the armed groups. Among the 36,000 evacuees, there were an unknown number of foreign fighters — Europeans, Russian Chechens, Saudis, Chinese Uighurs etc — and their families.

After the liberation of eastern Aleppo, surprising discoveries were made. On December 14 2016, Reuters posted a video from Jaish al-Islam’s abandoned headquarters: it showed lots of people getting food, dry milk, nappies and other supplies from a large storage.

Residents said to Reuters they had not seen so much food in years and they accused the armed groups of seizing international aid.

A few months later, relief worker Pierre Le Corf made an astonishing discovery. He had left his home in France in March 2016 and moved to Aleppo.

“In the western part of the city, there were 1.3 million people that nobody in the West talked about. There were no foreign organisations that could tell of the difficult conditions and the shelling that came from the eastern side. People were also killed in the western part,” said Le Corf when I reached him on the phone.

European media talked about “the fall of Aleppo” and the end of the “revolution” in 2016. His comment?

“Ask the people of eastern Aleppo what they think. Anyone can come here and ask them. They lived under terrorist rule. Children in eastern Aleppo starved while the terrorist groups had large stocks of food and medicines. I saw it myself.”

In the video, the White Helmets’ logo is seen on the walls close to the symbols of the Free Syrian Army and Jabhat al-Nusra.

Similar discoveries had been made in other areas of Syria. The White Helmets did not only work with the permission of the terrorist groups, as Patrick Cockburn explained in “Who supplies the news?” — the ties between them were so close that they had their headquarters next to each other.

The great amount of evidence of White Helmets association with terrorist organisations — Le Corf’s discovery was just one of many discoveries — did not affect the politicians or mainstream media in the West.

Fadia Restom lives in Sweden, but was born and raised in eastern Aleppo. She has relatives and friends in Syria and has regularly visited Syria during the war. In April 2017, she went to Aleppo.

“The people of Aleppo have become happier and more open: people come out to work again, and the markets are full of goods. People who previously moved to the areas of the Syrian Mediterranean coast are now beginning to return. There is a sense of hope,” she told me.

When Restom returned to Syria in 2017, she wanted to go to eastern Aleppo, to see the places where she lived as a child and to meet her old friends.

“These are people that I know and have grown up with. I couldn’t believe they supported the so-called revolution. When I got there, people told me how the armed men threatened them, held them as human shields and prevented them from fleeing.

“The messages on the walls remained: there were warnings to women that they must wear a veil, otherwise God would cut their hands off. I saw many horrors of this sort. I was shaken and I understand how frightened they must have been. They were imprisoned in their own city.”

She did not like how the battle of eastern Aleppo was portrayed.

In February 2017, the Atlantic Council, a Washington-based think tank that is part of the Nato-supporting organisation the Atlantic Treaty Association (ATA), published the report, Breaking Aleppo.

In the preface, former foreign minister of Sweden, Carl Bildt, and former secretary of state of the US, Madeleine Albright, wrote that the Aleppo case “was not only a humanitarian tragedy,” but also an event that “seriously damaged the interests and standing of the United States and its allies.”

Hence the outrage in the media and among politicians. Aleppo’s freedom harmed the interests of the West.

This article is based on part of Patrik Paulov’s new book, Syria’s Silenced Voices (2021).