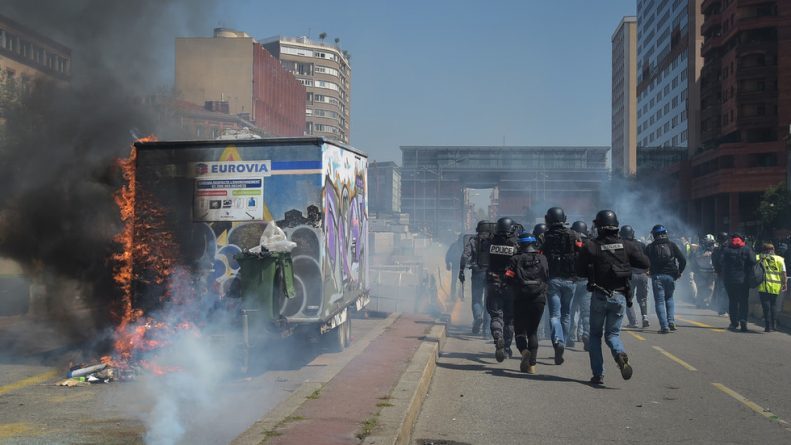 Sporadic clashes with police marred Yellow Vests protests in Toulouse, the city chosen as the ‘capital’ of this week’s anti-government marches in France. Act 22 is the first since a controversial anti-rioting law took effect.
This Saturday marked the 22nd consecutive week of the “Gilets Jaunes” movement as France once again saw anti-government protests, which were held in cities such as Lyon, Bordeaux, Marseilles, and Strasbourg. In the French capital of Paris alone, some 5,000 demonstrators took to the streets, according to the French Interior Ministry.

???❗ Absolutely impressive manifestation in #Toulouse, today’s capital of the #Resistance by the #GiletsJaunes movement

Thousands over thousands of #YellowVests in the streets

First clashes between cops and GJ were reported during #ActeXXIIpic.twitter.com/K9iORxZ3jX

Unlike some earlier protest gatherings, no major rioting has occurred so far this weekend. However, Toulouse, which was declared a “capital” of this Saturday’s protests, still saw street violence as the protest march there spiraled into clashes with police less than an hour after its beginning.

RELATED CONTENT: Chronicle to Define What the “Colectivos” Are in Venezuela

The protesters were seen throwing stones, bottles, and firecrackers at the officers, who responded with tear gas. Police also blocked several streets and used water cannons to disperse the crowd. At least 23 people were detained in Toulouse following the clashes that left at least two people injured, according to Le Figaro.

Marches in Paris and elsewhere were largely peaceful. Still, police arrested 15 people in the French capital, RFI reported. According to French authorities, some 31,000 protesters took part in the ‘Yellow Vests’ rallies across France, including around 2,000 in Toulouse.

…and more jovial than full of rage

Some participants used the occasion to show support to WikiLeaks founder Julian Assange, who was arrested on Thursday in London.

This week a new controversial anti-rioting law came into force in France after the country’s Constitutional Council partially censured it. Some of its provisions, including one that bans covering one’s face during a mass gathering, was criticized by human rights organizations. Some of the protesters on Saturday apparently ignored it by wearing gas masks and other gear.

After worst tensions in #Toulouse during #ActeXXII by #GiletsJaunes, tanks were spotted in the city after heavy use of chemical weapons#YellowVests #Resistance pic.twitter.com/A8mDpak7Gv