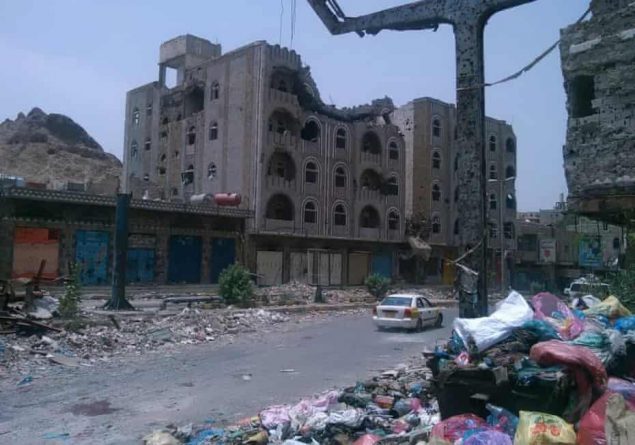 More than 10,000 people in Yemen have been killed and 3 million forced to flee their homes as a result of almost four years of fighting. An estimated 22 million people are now in need of aid and up to 14 million face starvation. As talks to end the conflict continue in Sweden, three Yemeni aid workers from the Norwegian Refugee Council talk of the physical and emotional destruction the fighting has brought to their country. I was young when the war started, aspirational and ambitious. I could never have imagined the power war has to trash our dreams.

I have already lost friends and relatives in this brutality. Some that have died and others I have been cut off from. I don’t know where they are now; whether they are alive or dead.

We have lost the right to live safely and with dignity

If you haven’t seen Taiz, it is impossible to imagine what war has done to this city. The damage hits in every way. The missiles have torn apart buildings and the siege has torn apart families. Movement from the north to the south of the city can take six hours, using dangerous roads and tunnels. Before the war, it took 10 minutes.

War brings out the worst in a society. People are subjected to extortion, threats and detention at checkpoints. The violence has destroyed our social fabric and created smaller conflicts. It has eroded us materially and morally, we have lost the right to live safely and with dignity. Marwan Al-Sabri: ‘The damage hits in every way.’ Photograph: NRC

I already live in this war, but humanitarian work exposes you to the very worst of it, to the sadness and tragedy of people suffering the most. We already know that the shelling kills people, but I am seeing what a broken economy does too. People have been left so desperately poor that they kill themselves before the hunger does.

Our work is important, but it is also horrifying.

There used to be at least 20 young people from my village enrolling in university every year, most of them to study medicine or engineering. No one considered joining the army or even thought of carrying weapons. But almost no one can afford university now. Jobs are scarce, prices are high, joining an armed group is one of the only ways to earn a living. Young, untrained men are going to the frontlines because they have no other choice.

Some of the stories break me. I met recently a 55-year-old man named Mohammad Mahioub Ahmed Saif who told me that his daughter, Taybeh, had stepped on a landmine the week before her wedding. It blew off one of her legs and badly damaged the other, leaving her bedridden and entirely dependent. Mohammad’s village is literally a minefield. He sold everything he could and brought his family to the house of a family member, where they are sharing a half-built room with no doors and no windows.

Mohammad cried when he told me his story and I cried too. On a night that started as entirely normal in Amran city, my family and I were watching TV, some of us flicking through social media on our phones while watching some now-typical images of bomb blast victims on the news, horrible photos of body parts blown apart in violence across Yemen.

We didn’t know then that our neighbourhood would be next.

Later that night we heard the jets, a sound that has become strangely routine. Adults barely react to their haunting humming sound now, but it terrifies our children, who run from their beds, petrified.

When they were smaller, we could tell our children that every explosion was the last; comfort them in the short term and hope they would forget by the time of the next bombardment. But they are older now – the bombs have been falling for three and a half years and our children can’t remember a life without fear.

We heard them this night. One after the other until a strike landed on the house immediately adjacent to ours. That feeling is one I can never forget and will never be able to adequately describe. The sound was thunderous and the impact like an earthquake, so strong that every family in our neighbourhood thought we were its target, that their own house had been hit. And after the explosion, there was absolute silence. It was as if those of us still living needed time to realise we hadn’t been killed.

As we collected ourselves from the shock, we started calling for one another, a choking, frantic rollcall. The scene was one of chaos. The dusty smoke was blocking our vision and making it very hard to breathe. Windows were shattered and doors had been blown away. Glass fragments from the windows were covering the floor, but it was late at night and many of us were barefoot. The children were hysterical; they were running and screaming, blinded by smoke, with nowhere to go. Men and women followed, stumbling from their houses, the latter without the headscarf they would normally never leave home without. Ali Al-Makhaathi with his children and nephews. Photograph: NRC

Ten people were killed that night. Eight family members of our neighbour, Ali Al-Jateem, and two people from a nearby house. Scores were injured. Ali couldn’t utter a word. He stood silently outside his bombed house watching people carry out the body parts of his dead children and grandchildren.

The crowd was left to choose between continuing to dig for survivors or fleeing the threat of a second hit. They stayed

Then the jets came back – we heard them now as if we were the children.

Overhead, the same quiet, terrifying roar, and from under the rubble, people screaming for help. The crowd that had gathered was left to choose between continuing to dig for buried survivors or fleeing the looming threat of a second hit. They stayed. Under the thunder-like sound of the hovering jets, they dug through the rubble to a small, screaming child. And momentarily, the joy of finding this one tiny survivor eclipsed the horror in everything else.

As the sun rose, it revealed the scale of the destruction and we were all asking ourselves how any of us survived, how we made it out of our houses, how our children were spared. Several houses had been completely destroyed, others damaged, like ours. We have watched our neighbours slowly break. Even those who survived have lost the lives they know. They are homeless, or have lost their assets, lost every possession, items accumulated over a lifetime. And we have all lost our ability to pretend the planes are routine. We have lost our practised sense of immunity.

It will take a long time for us to recover – this community, this country. It is agonising to watch our children wince and start. We know they cannot trust us now.

That process can only begin when we tell them an explosion is the last, and we know it to be true. Four years of war makes me miss the old days, even if they were not ideal. I realise now that there is nothing more important in life than safety. That’s something this war has taken from us.

With its bombs and missiles, this war has brought immense fear to our lives. We live under constant threat, we are socially unstable, our chance of education is dead, and our country is politically insecure and economically broken.

We are never free of anxiety.

Every person in Yemen has had their life radically changed by his war. People seem empty to me now; we do whatever we have to each day to let time pass and try to forget about the situation. We hide our inner beliefs because we know that silence is a safer option than saying anything that could upset people in power and cause us more problems.

The idea of childhood that I knew has disappeared and children now carry the burden of stress and labour like adults. An Italian friend said to me that Yemeni children have facial features of people far older.

I feel desperately sorry that our children have tasted nothing but the bitterness of war.

The education that should be their right has instead become a dream. Parents whose salaries are not paid or [whose] jobs are lost cannot provide for the basic needs of their children and education is, as usual, the first casualty.

We used to have dreams but now we live in a nightmare. We are so eager to hear the sound of peace and to rebuild our country. We deserve better than this.

… we have a small favour to ask. As 2018 comes to an end, we’re asking readers to make an end of year or ongoing contribution in support of The Guardian’s independent journalism.