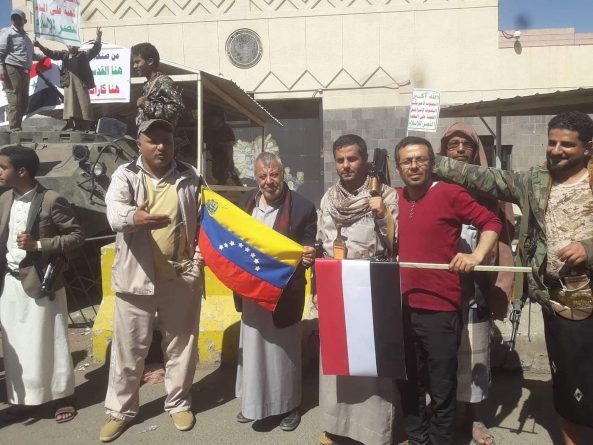 Yemenis congregate in front of the US embassy in Sanaa, capital, to protest against Washington’s intervention in Venezuela.

Members of several Yemeni political parties and social movements participated in this gathering on Thursday to express their solidarity with Venezuela in the face of hostile US actions. and, in addition, condemn the normalization of ties of some countries with Israel .

Through a statement read at the end of the protest, the protesters stressed the need to support the Venezuelan nation that suffers the aggressive sanctions of the United States.

Brazil, Argentina, Chile and Ecuador were also asked to defend the Bolivarian country against the bellicose measures taken by the United States Government, which supports the coup in Venezuela.

In the same way, they asked the entire Yemeni population to resist the selfishness of the Israeli regime and US imperialism.

Dear @jaarreaza, this is Yemen in solidarity with your home country, Venezuela. Rest assured that the revolutionary people of Yemen will forever be a friend of yours, and I hope that you will take into consideration & recognize the authorities in Sana’a. pic.twitter.com/cBQyABA4hr

In this way, the Yemeni nation joins other peoples of the world who supported the Venezuelan government after Juan Guaidó, the president of the National Assembly (AN) -in opposition majority and in contempt since 2016- proclaimed hhimself the president in charge of Venezuela. The failed coup in Venezuela from the first moment had the support of the US, led by Donald Trump, which on one hand with its policies, including sanctions, aggravates the situation in the Caribbean country and on the other hand, sends alleged humanitarian aid to this country, which is nothing more than a mere pretext to invade Venezuela .

Washington has even threatened, on repeated occasions, military intervention in the South American country, an initiative backed by Guaidó himself. Faced with these threats, the president of Venezuela, Nicolás Maduro, affirmed on February 20 that the Armed Forces of his country have the training and sufficient resources to face  American military adventurism.