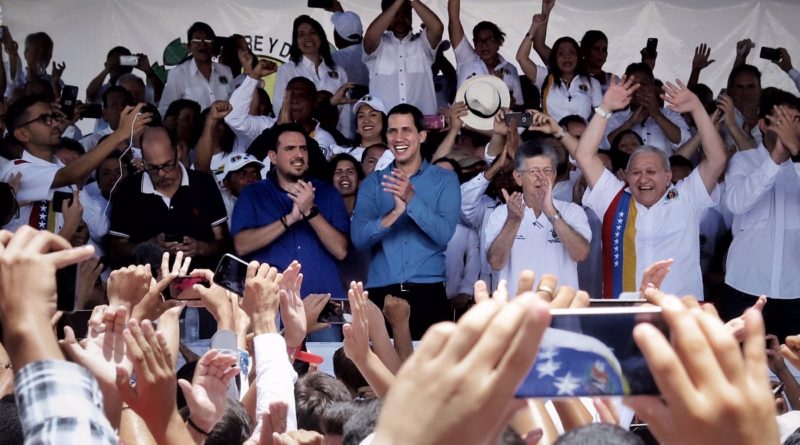 No matter how much you want to hide it, the Venezuelan opposition should no longer be called as a singular noun, but as the oppositions. There is the one represented by Juan Guaidó, deliberately submissive to the foreign policy of the United States, and there is the one dissident on that one, which has anti-Chavista Venezuelan politicians with aspirations for public office and institutional platforms.

We are in a political moment in Venezuela where the entire map of interests and power agendas is reorganized around an electoral contest under a full spectrum aggression scheme promoted by the North.

This is the parliamentary elections at the end of 2020, in the context of pandemic and with an opposition leadership that has undermined Venezuelan institutions since 2015 from the National Assembly (AN), which in principle dedicated its first actions to a direct affront of “regime change”.

The consequences of the late “Mesa de Unidad Democrática” (MUD) taking over the legislative branch are still alive, with a tragic weight on the shoulders of the majority of the Venezuelan population. We will go through them as an annotation so as not to repeat the recent history, so damaging to the Bolivarian republic.

Since the first day

This condition dynamited the political dynamics of the opposition leadership, which began to act on the margins of constitutional limits with the rudder parliament, even evading them and demanding institutional isolation that led to a clash, first, with the judiciary in the framework of contempt of the judgments of the Electoral Chamber and the Constitutional Chamber of the Supreme Court of Justice (TSJ), and, subsequently, with the executive and the other two branches (moral and electoral).

Since then, the institutional crisis has shaken the foundations of the state and of Venezuelan society, since it no longer had a duly installed legislative branch along the lines established by the Constitution.

Along with this, the decision of how the power quotas of the AN would be distributed in the MUD caused a series of disaffections and plots that deteriorated until the extinction of the opposition’s multiparty platform. In fact, the decisive factor in this process was the hegemony of the so-called G4, the four parties with the largest number of anti-Chavista votes: Primero Justicia (PJ), Voluntad Popular (VP), Acción Democrática (AD) and Un Nuevo Tiempo (UNT).

The adoption of foreign agendas, the internal corruption of the parties, the programmatic weakness of their objectives and the waste of political capital produced in the G4 a rebellion of minor deputies in 2019, demonstrating that the hegemony of those parties ceased to represent political aspirations from a large number of anti-Chavistas.

2.- The anti-politics in anti-chavismo won. When the G4 divided up the AN at its convenience, the political debacle on the opposition side began. The desire for the coup d’état became irreparable for that litter, especially the one represented by PJ and VP.

3.- Change in the political perceptions of the Venezuelan population. Most Venezuelans can remember that with the arrival of anti-Chavismo to the AN, the country’s economic situation began to decline tragically. Many of us remember 2016 as a year where shortages increased and consumption capacity reached unthinkable limits for the majority.

RELATED CONTENT: Leopoldo Lopez Charges at the WSJ for Unveiling his Terrorist Plot

Some of the most powerful business sectors, supply and trade chains and economic agents in Venezuela had decided to embark on the same dismissive route as the AN leaders. The coordination between the big business guilds (Fedecámaras, ranchers, etc.) with the directive of the parliament was more than evident, while they carried out a campaign of criminalization of President Nicolás Maduro and the highest leaders of the state.

The “economic war” was supplanted by a social image of “inefficiency and corruption” by the government, later considered a “dictatorial regime”, which meant a change in the political perceptions of the Venezuelan population, in which the “Rescue of the economy” was the main mantra of the campaign for “regime change”.

5.- The AN as primary manager of the “sanctions”. In 2017, when Julio Borges took the presidency of the parliament, the bet was redoubled: now the legislative power was being instrumentalized as a manager of today’s unilateral coercive measures.

It was the leadership of PJ, that small group that is now in Colombia, Spain and the United States, that inserted the agenda of the international economic war against the entire population of Venezuela, using Venezuelan institutionality in an unconstitutional way to give legitimacy to the request of economic, financial and commercial sanctions and blockades.

6.- False institutionality. The former is one of the most tragic consequences of the opposition winning a platform from the state for its coup strategy, clearly contrary to the interests of an entire people that doesn’t want to be led into chaos in a true “humanitarian emergency”. The effectiveness of this task has a lot to do with the connection that Julio Borges and his people built with weighty financial sectors in the United States and Europe, covered by fake institutionality.

In effect, the G4 not only managed to undermine the normal relations between powers, but also announced univocal and absolute legitimacy, protected by Washington and the political and diplomatic platforms that support it, vis-à-vis the rest of the Venezuelan state.

Based on this fictitious construction, spread by anti-Chavista media, the NED / USAID funding NGOs and anti-Chavista politicians, the United States government and its international allies dictate that President Nicolás Maduro is not the president of any country and that Juan Guaidó is the “interim” in charge of a transitional government towards a Venezuela tailored by the North.

7.- The United States abandons the shadows. Due to how the conflict between the AN and the Nicolás Maduro government developed, the United States decided to take the Venezuelan conflict directly, leaving the shadows, torpedoing with “sanctions” and raising the temperature of outsourced violence.

Towards the reinstitutionalization of the AN?

8-. A broken antichavista leadership. The division of the opposition has been a clear consequence of how the anti-Chavista leadership has kept accounts and exercised its position of command from the AN, being a strategic weakening for the electoral aspirations of some partisan sectors that have wanted to stick to the constitutional route.

9.- Reorganization of the opposition political field. The situation described not only benefits Chavismo in the race for the largest number of seats at the end of 2020, it is also a real incentive for those opponents who are looking to reorganize anti-Chavista political parties that excluded themselves from Venezuelan political life, kidnapped by a small group of extremists who chose to subordinate themselves to the Washington agenda. This is the case of AD and PJ in recent weeks, in addition to the judgments of the TSJ so that there is greater political participation in the parliamentary elections.

It should be remembered that, likewise, the entire path traveled since 2015 has served for there to be a plan for the re-institutionalization of the AN, proposed by the National Dialogue Table between the different political parties in dispute, except for the self-excluding coup sector led by Guaidó. This means an advance in the dialogue between the government of Nicolás Maduro and those who politically oppose him, so necessary for unlocking the game.

10.- Sharpening of the two competing political projects. But without a doubt, and to conclude, one of the greatest consequences of the electoral victory of the Venezuelan opposition in 2015 was to sharpen the contradictions between the two competing projects, that of the Bolivarian Republic and the neocolonial republican one, which caused a political collapse with sequels experienced to this day.

In this context, Chavismo has managed to circumvent “regime change” with political elements at hand that have managed to resist scenarios of extreme violence, failed assassinations and mercenary incursions, pictures of economic, financial and commercial suffocation, a pandemic still in motion. and with a state in conflict both nationally and internationally.

In light of what has happened in the last five years, it is possible to understand how important it is for Chavismo to regain a space like the National Assembly.