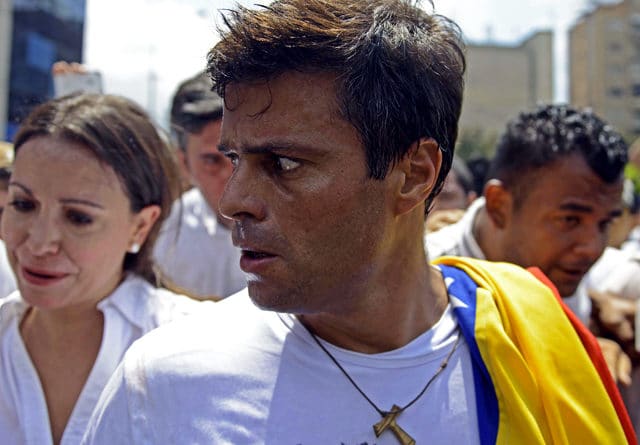 This Saturday, after the Wall Street Journal (WSJ) published a piece of journalism in which Leopoldo López was singled out as orchestrating the mercenary operation of last May 3, which was intended to assassinate high-ranking government officials including President Nicolas Maduro and establishing a supervised regime from Washington, the far-right politician accused the WSJ of making assertions “without proving anything” and without presenting evidence.

Through his Twitter account, López charged at the WSJ: “Yesterday, The Wall Street Journal, without foundation or evidence, published a series of completely false accusations against the leaders of Voluntad Popular and myself. Also, they accuse me without presenting any kind of evidence. And they do not present them because they simply do not exist.”

In the article, entitled “Venezuelan opposition guru directed the planning to overthrow Maduro,” it is argued that the leader of the far-right organization, Voluntad Popular, together with Juan Guaidó, evaluated the proposal of six outsourcing terrorist contractors to advance a plan to overthrow the government of President Nicolás Maduro, as well as the physical elimination of its most prominent figures, finally opting for SilverCorp USA.

“The title of The Wall Street Journal article does not match the content. They make assertions without proving anything. They do not present evidence of the companies or the alleged hires. Simply because such claims are false,” López defended himself and blamed the Venezuelan government – which he refers to as” the dictatorship “- for implicating him” with its lies to justify the persecution against the ‘democratic’ political parties.” In fact, the piece actually mentions Blackwater and provides relevant details that were previously unknown.

In another buried onslaught against WSJ, he argued that the “government propaganda apparatus” has engaged in disinformation “and has unfortunately found an echo in voices that are called on to show real events.”

For its part, the newspaper has not published any corrections for its article, and it was shared by the Venezuelan Minister of Communication and Information, Jorge Rodríguez, during a television address on June 27, saying that the information th WSJ used came from opposition sources close to López and Guaido, including some relevant anti-Chavista leaders.

Leopoldo Lopez is hosted as a “guest” at the residence of the ambassador of Spain in Caracas, after having escaped from his residence, (where he was serving a sentence for directing terrorist acts -guarimbas- of 2014), to lead the failed coup d’etat on April 30, 2019, event that was witnessed by the whole world.

In accordance with the provisions of the Vienna Convention, his status prevents him from pronouncing on political issues by any means but most importantly should prevent him from engaging in criminal behavior as a “guest”, but this international rule is constantly broken and it is the responsibility of the Spanish embassy to enforce it.

In no situation is it admissible for the guest of a foreign government to use a diplomatic headquarters to commit crimes, and in this regard, the government of Venezuela summoned the Spanish diplomats and demanded explanations for this case.