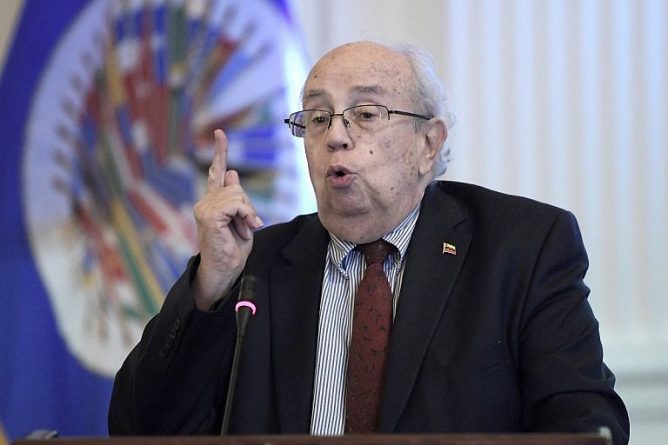 This Tuesday, before the Permanent Council of the Organization of American States (OAS), a significant number of member states expressed their rejection of the illegal representation of Gustavo Tarre Briceño in the international instance on behalf of Venezuela, considering it null and void and the resolution of April 9, 2019 without legal effect.

The resolution indicates that part of the inter-American forum recognizes Gustavo Tarre as the representative appointed by the opposition deputy Juan Guaidó, who proclaimed himself “interim president” of Venezuela on January 23 and since then, with the support of the US government, he intends to usurp executive functions and illegally appoint representatives of Venezuela in the world.

Through a public statement, the delegations of Antigua and Barbuda, Barbados, Belize, Dominica, Saint Kitts and Nevis, Saint Vincent and the Grenadines, Suriname and Trinidad and Tobago, announced that they do not support the appointment of the envoy of the National Assembly (AN) in contempt as ambassador to the Organization of American States (OAS), because he is not being appointed by the constitutional government of the Bolivarian Republic of Venezuela, who alone has the power to accredit ambassadors, interim representatives, alternates and advisors.

Additionally, the Permanent Mission of Mexico also issued a note to the Chair of the Permanent Council, which reserves the right to reiterate its position of rejection and non recognition of the representative appointed by the National Assembly in contempt, Gustavo Tarre, acts and decisions whose legitimacy intends to fall into the aforementioned resolution, which threatens the institutionality of the Organization and the Inter-American System.

The delegations of Uruguay, Nicaragua, Guyana and Bolivia also expressed their rejection and non recognition of the usurper.

The Ambassador of Uruguay , Hugo Cayruz, pointed out that “this Organization has violated the rules and legal procedures of its Charter”.

In addition, the Alternate Representative of Nicaragua, Luis Alvarado, stated that “the Permanent Council took nonexistent powers that violate the OAS charter and undermine the sovereignty of nations.”

The Alternate Representative of Guyana, Riyad Insanally, pointed out that the Cooperative Republic of Guyana reserves the right to reiterate its position of rejection to Gustavo Tarre, in the face of  actions whose legality falls on the illicit resolution.

On the other hand, the Ambassador of Bolivia , José Gonzáles, confirmed that his country does not accept the approval of this resolution, which is null and without legal value, adopted by the Permanent Council on April 9.

The one who appoints the representative of a country to the OAS is the head of the executive branch, in this case President Nicolás Maduro Moros.

It should be noted that the OAS has not recognized another president other than President Maduro, as recalled in recent days by the Venezuelan ambassador to the UN, Samuel Moncada.