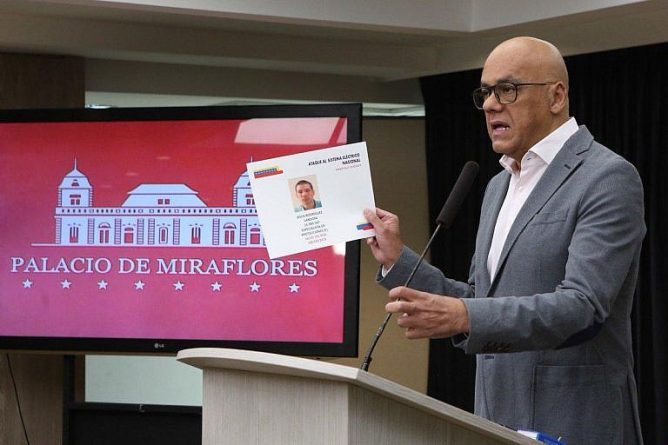 The sectoral vice-president for Communication, Culture and Tourism, Jorge Rodríguez, reported on Tuesday that five people were captured and 19 have been identified and sought for the attacks on the National Electric System (SEN).

Through a press conference held in the Simón Bolívar room, located in the Miraflores palace, the vice president said that in the last two years they have “sabotaged more than 50% of the more than 500 electrical substations that Venezuela has” through arson, damaging  switches and transformers, theft of copper cables and other actions to permanently damage the system.

He indicated that these fires were arson, and that more than 280 forest fires have occurred throughout the 35 thousand kilometers of power lines that Venezuela has. “Along that road they perpetrated what history will know as the most brutal and criminal terrorist attack against a people.”

After recalling that there were two major attacks on the Simón Bolívar national hydroelectric complex (the cyber attack on March 7 and 9, and the mechanical and physical attacks that occurred on March 25, 26, 27, 28 and 29), he reported that 45 minor attacks have also occurred: attacks on substations, attempts to “suspend important lines throughout the country”, attempt to “interrupt transmission lines”, attempts to create forest fires, but “we have been able to confront and defeat these terrorists”.

Arrests and warrants
The minister stressed that there are 5 people captured, who have already been identified in their participation in one of the two attacks and how they did it. “We have perfect clarity of the modus operandi through which perpetrated the cybernetic action of March 7, but as the investigations continue their course, we will reserve most of the information of the cyber attack ,” said Rodriguez.

However, he invited scrutiny of  “some of the forums that have been developed in scientific blogs and scientific pages internationally, because those are not far from identifying how it was done”.

Later, he said: “In the coming days we will also reveal what the modus operandi” of cyber attacks was, in detail. “We already know how they did it. We know clearly what were the processes they violated, how they got in, what were the messages sent to the Guri machines to pursue the purpose of destroying it. What they were looking for was to destroy all the generating machines of the Simón Bolívar del Guri Hydroelectric Power Plant, so that the country could be, as an article in the newspaper El Espectador of Colombia says, 35 or 40 days without electricity service. They were left with the desire (unfulfilled), fortunately”.

“The truth is that they managed to violate the brain that governs the Simón Bolívar central computer in Guri.” The terrorists involved are: On the other hand, he indicated that between March 25 and 28 there were direct attacks against the transmissions at the Guri hydroelectric plant. “They were mechanical attacks,” he said, showing photos of the wreckage in the 765-KV and 400-KV transmission yard. He indicated that they know the modus operandi of how the fire was caused and “how the alarms went off so they could not be aware of what was happening.”

“When the investigations of the attacks began on March 25-28 and the interviews with those who were there began,” the minister explained.

Jesús Rodríguez Landoni was the expert in protections in the office of Guayana and in the Central Simón Bolívar in Guri, which includes all the mechanisms of the National Electric System, so that, when any fault, attack or event appears, the whole system is protected. “If there is a path that is damaged in Santa Teresa del Tuy, the protection systems protect each side of where the fault occurred, to prevent it from spreading throughout the electrical system.”

“As soon as the interviews begin, (Rodríguez Ladoni) flees the country. According to family members and relatives, at this moment he is in the United States and lives in the residence of an officer of the United States Air Force” who protects him. “We are requesting him because he has direct participation in the attacks from March 25 to 28”.

He stressed that “we are already quite close to achieving a lasting balance in the restoration of electricity service to the whole country” and said that “from the Bolivarian Government of President Nicolás Maduro, we will continue to advance until we achieve full stability of the National Electric System,” he said.