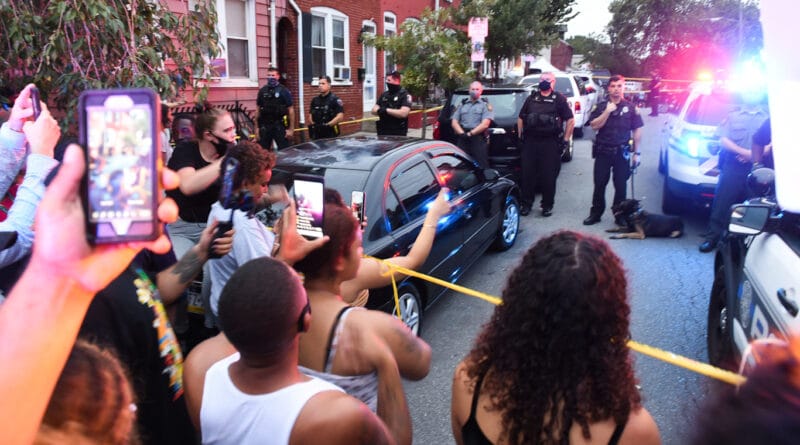 The lenient treatment that Brett Hankinson and other killer cops have received is in direct contrast to those protesting police violence.

Brett Hankinson, the sole Louisville police officer indicted Wednesday over his role in the killing of African-American ER technician Breonna Taylor, posted his $15,000 bail within hours of being booked. Hankinson is being indicted on three counts of wanton endangerment over the March 13 incident, where a squad of police conducted a no-knock raid on Taylor’s apartment, shooting the 26-year-old six times while she was barely awake. Hankinson fired ten rounds into the crowded apartment, with many piercing the walls and endangering neighbors. The other officers, who have not been charged, fired 22 rounds. Thus, only one officer is being held accountable for any of his actions, and then only for the bullets that did not hit Taylor, only the ones that endangered others. If convicted on all counts, he faces a maximum of 15 years in prison. Last week, the city of Louisville agreed to pay Taylor’s family $12 million in compensation.

The decision not to charge anyone with her murder enraged many, sparking large protests in Louisville, where at least 24 people were arrested last evening on charges of unlawful assembly, failure to disperse, and rioting, according to local law enforcement. In this racially charged era, spontaneous protests also broke out in many cities across the country.

In Los Angeles, one protester was seriously injured after a pickup truck sped into a large crowd of anti-racist protesters, an increasingly common tactic of violence and intimidation seen throughout the summer. The driver sped off and was apprehended by police several blocks away, who quickly let the attacker go free.

The lenient treatment Hankinson and other killer cops have received is in direct contrast to those protesting police violence. Earlier this month, police in Lancaster, Pennsylvania shot and killed 27-year-old Ricardo Muñoz, leading to protests in the city. Lancaster police used pepper spray and chemical agents against those demonstrating, who they accuse of “pil[ing] street signs, trash cans, a metal dumpster, a metal bike rack, pieces of plywood and a wooden pallet,” then proceeding to, “fill the dumpster with additional trash bags, as well as the wood, and set the contents on fire.” For these actions, seven protesters are being held on $1 million bail each.

The punishment was so extreme that Pennsylvania Lieutenant Governor John Fetterman decried the move as “blatantly unconstitutional.” Here, Fetterman is referring to the Eighth Amendment, which reads that “Excessive bail shall not be required, nor excessive fines imposed, nor cruel and unusual punishments inflicted.” Earlier in the year, protesters in the state were charged with up to 80 years in prison for burning police vehicles.

Only after committed resistance from organizations like the ACLU did judges reduce the $1 million figure to between $25,000 and $100,000 depending on the individuals — still far more than Hankinson’s.

This photo is of Taylor Enterline, staging a peaceful protest for racial justice in front of the Manheim Borough Police station this summer. A Lancaster judge just set her bail at one million dollars for participating as a medic in last night’s protests. pic.twitter.com/nR43TNJFDP

Taylor’s lawyers allege that she was killed as part of a wider gentrification plan to force poor African-American residents out of their homes in order for private developers to cash in. Narcotics detectives had been deliberately misled by police intelligence to believe that some of the city’s largest and most violent criminal drug rings were operating out of the building, hence the reason for the no-knock raid with guns drawn. Taylor’s boyfriend Kenneth Walker, who was with her at the time of the incident, drew his handgun and fired back at the police, thinking the police were would-be home invaders. Hankinson’s colleague Jonathan Mattingly was injured, although it is not certain if Walker was the one who hit him.

Police violence against people of color has been a front-and-center issue in the United States, particularly since the killing of George Floyd in Minneapolis in May. Images of Minneapolis officer Derek Chauvin kneeling on Floyd’s neck for over eight minutes until he suffocated to death went viral, causing a storm of outrage across the world. It is estimated between 15-26 million Americans joined a demonstration for black lives during the summer, with the movement enjoying strong public support. A new Gallup poll found that a record low 35 percent of Americans are satisfied with how black people are treated in the United States.

The fact that Hankinson is being indicted only for the bullets that did not hit Taylor and for damaging property suggests that to the legal system, black lives do not matter, or at least no more than $15,000.

Featured image: People chant during a protest at the scene of a police shooting on Laurel Street and Union Street in Lancaster city on, Sept. 13, 2020. Andy Blackburn | LNP via AP