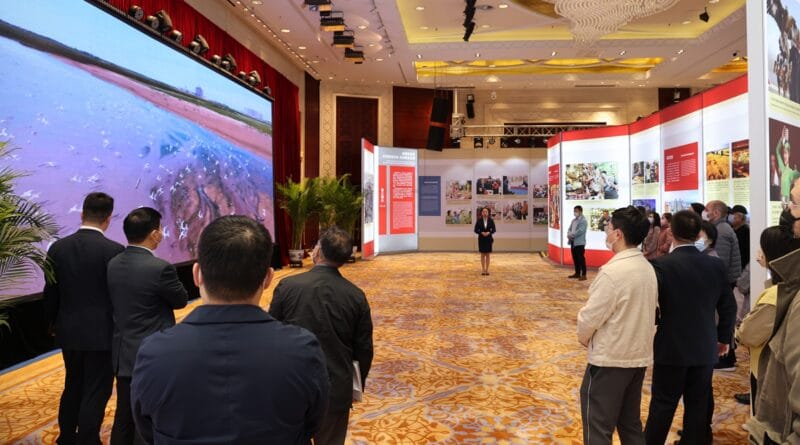 Exhibit shows to the outside world Xinjiang’s confidence

An exhibition on the counter-terrorism situation in Northwest China’s Xinjiang Uygur Autonomous Region was displayed in Beijing on Monday – the first time such an exhibit was held outside the region with a large number of pictures and videos on more than 50 terror attacks.

Senior officials and experts said the display proves that the Xinjiang region is more open to show the international community what it has suffered, and showcases its confidence in current policies, which have brought hard-won stability.

The Xinjiang regional government held a press conference in Beijing on Monday. Before the press event, domestic and foreign journalists were guided to the counter-terrorism exhibit, which is similar to the one displayed in the Urumqi International Convention Center in the regional capital. The exhibit consists of three parts – an overall introduction on Xinjiang, some of the terror attacks taking place in the region from 1990 to 2016, and the measures taken and the achievements made of the counter-terrorism work in the region.

Selected from thousands of terror attacks in the region, the 52 terror attacks displayed in the second part of the exhibit are listed chronologically with introductions, photos, and sometimes video footage in Chinese and English next to each display.

The introduction on terror attacks started with an attack in Baren township of the Kizilsu Kirgiz Autonomous Prefecture, plotted and carried out by the “Turkistan Islamic Party” in 1990, and ended with the attack in Moyu county, Hotan Prefecture on December 28, 2016 when four terrorists raided the building of the county Party committee.

Counter-terrorism exhibits have been staged in different prefectures and cities in the Xinjiang region, but it is the first time for such an exhibit to be staged outside Xinjiang, the Global Times learned from  an exhibition organizer.

The exhibition in Beijing will better show the outside world on Xinjiang’s counter-terrorism work and achievements, Xu Guixiang, spokesperson of the Xinjiang regional government, told the Global Times on Monday.

“We also want to tell people how the current stability and peace in Xinjiang was achieved. Many visitors to the Urumqi exhibit told us that they were shocked and even shed tears over the past tragedies,” said Xu. “We believe that only by knowing the whole picture in Xinjiang can the outside world avoid being fooled by rumors [about Xinjiang] made by those anti-China forces.”

The Global Times learned from the working staff that compared to the exhibition in Urumqi, the Beijing one has no display of the various weapons used by the terrorists, the self-made explosive gear, the textbooks with distorted religious content or the banners with slogans promoting “jihad.” There were more detailed photos and videos on the same terror attacks featured in exhibits in prefectures and cities in the Xinjiang region, including Hotan and Kashi.

The staff noted that they have blurred some bloody videos and photos in consideration of the visitors’ feelings. Filming or taking photos in the exhibition hall is not allowed to avoid spreading violent and terrorist content.

A window to the truth
The exhibition was held in Beijing in the middle of July and accepted only group visits. Monday was the first time for foreign visitors to come, the staff at the exhibit told the Global Times, noting that previous visitors left notices, with many saying that the exhibit helped them change their impression of Xinjiang.

“When seeing the second part, I felt sad about the many tragedies in Xinjiang… but after learning about the third part – the changes that took place after the crackdown on terrorism in the region – I felt gratified and happy for the local residents,” one visitor wrote.

Muhammad Asghar, a journalist from Pakistan, visited the Beijing exhibit on Monday. “This is not my first time to see the counter-terrorism exhibit, but it is still shocking to see the tragedies in the past.”

Asghar had traveled to Xinjiang twice and visited the Urumqi exhibit with a group of foreign journalists. He told the Global Times that the exhibit is very informative and offers an overall perspective of what the region has suffered from and what steps the government has taken to fight terrorism, and to improve the lives of local residents.

“The exhibit is also necessary to make the outside world  see the true situation in Xinjiang since there are so many rumors on Xinjiang. After you see these photos and videos, you come to know what happened to the victims, what happened to their families,” Asghar said.

Asghar recalled that after visiting the exhibit in Urumqi, some foreign journalists also said they were shocked to see the photos and videos. “I think it [the exhibit] is very useful in helping people understand Xinjiang,” the Pakistan journalist said.

“Aside from the exhibit, we also visited many places in Xinjiang, including Kashi, and saw many things, including the vocational training and education centers. The current peaceful and happy life of local residents is in sharp contrast to the previous terror attacks they had suffered,” he said, noting that he hopes more foreigners, especially foreign journalists, come to see the exhibit.

Along with Asghar, journalists from the Chinese mainland, Hong Kong and a few foreign media outlets who attended the Monday press conference on Xinjiang-related affairs also visited the exhibit.

The Global Times reporters noticed that a few of them took notes during the tour, while some foreign media just skipped the exhibit. As of press time, no news on the exhibit in Beijing came out of some Western media, which is keen on spreading “negative” news from and about Xinjiang.

The Global Times learned previously from a staff member of the Urumqi exhibit that some Western journalists refused to visit the exhibit there.

“They claimed that this is ‘moral abduction’ and would compromise their ‘objective’ judgment. I was furious at such remarks for they refused to know the truth about Xinjiang!” said the staff member.

Whether the Western media outlets or their reporters are willing to see the counter-terrorism exhibit or not, they cannot cover up all the terror attacks and scars the Xinjiang region has suffered and the hard work it has done to restore stability and prosperity, experts said, noting that as Xinjiang has seen no terror attacks for more than four years, the region is also becoming more confident and open to the outside world despite increasing Western smearing.

RELATED CONTENT: The US is Trying to Light the Match of Islamic Extremism in China’s Xinjiang

Experts said that China’s strategies to tell the truth on the counter-terrorist situation in Xinjiang have also changed – from the initial silence to releasing the first documentary on Xinjiang’s counter-terrorism campaign in December 2019, which offered never-seen-before crime scenes of terrorist attacks in Xinjiang, and to victims of terror attacks sharing their stories at press conferences.

“We have reiterated on different occasions that what Xinjiang has done is to make local residents live a safer and better life. Staging the exhibition in Beijing shows we have the confidence to let more people know and be touched by the far-reaching changes Xinjiang has experienced,” Xu said.

Xinjiang has been free from any terrorist attacks for four years and nine months, which is considered a great achievement of the measures the region took in the past years.

Xu also noted that to remove the soil for the three evil forces – separatism, terrorism and extremism, there is still more work to do. “The current achievements do not mean that we can let our guard down and put arms into the warehouse and release the horses. As long as the three evil forces exist, Xinjiang will not alter its determination to implement counter-terrorism measures.”