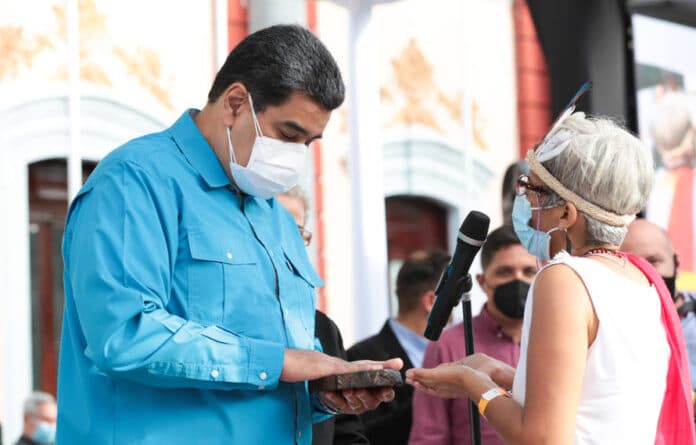 Venezuela joins the voice of the peoples of America who suffered for over 300 years from the genocide that followed the invasion by the Spanish empire, and announced forceful political actions of an international scope to vindicate the struggle of the peoples, when commemorating the Day of indigenous Resistance, this Tuesday, October 12.

President Nicolás Maduro reported that his government will issue formal communications directly to the King of Spain, with reflections on the historical consequences of the conquest. Venezuela will also petition the Community of Latin American and Caribbean States (CELAC) to transparently disclose what happened in that dark period of universal history.

“We will propose that CELAC establish a truth and justice committee to establish the historical path of 300 years of colonialism,” said President Maduro. Venezuela’s Minister of Culture, Ernesto Villegas, will preside over the truth commission on behalf of Venezuela, to clarify the concepts and vision of the future regarding this issue.

The objective is to bring together respected researchers, historians, anthropologists, and sociologists who, from CELAC, communicate with the old European empires; so that once and for all the truth of what happened in these 300 years of colonialism is established.

May Spain ask for forgiveness!
In his reflections during the commemoration of the Day of Indigenous Resistance, the Venezuelan head of state, Nicolás Maduro, said that Spain could have chosen any date to commemorate its national day. However, the custom of celebrating October 12 as “Day of the Race” or “Hispanic Day” was imposed.

In Spain, the country’s National Day is celebrated on October 12, a national holiday since 1892, commemorating Columbus’ arrival in the Americas. The date also marks Armed Forces day in Spain.

“It is an immense offense to the memory of millions of men and women who they killed themselves here in Our America,” said Maduro. “Spain will have to reflect sooner rather than later, it will have to rectify and recognize that it was 300 years of colonialism. It is an offense to all of America that the King of Spain still celebrates October 12 as a holiday, the day the largest genocide in history began.”

In this sense, President Maduro ratified that the Bolivarian Republic of Venezuela joins the voices that demand the King of Spain “to rectify his position, to reflect and to apologize to America for the genocide of more than 300 years against our grandparents and against our grandmothers.”

He recalled the letter recently sent by the Mexican president, Andrés Manuel López Obrador, addressed to the King of Spain and Pope Francis. He added that the Supreme Pontiff responded with words that marked a historic milestone and demonstrated clarity, apologizing to America on behalf of the church for supporting conquest and genocide of the continents.

President Maduro also denounced a rising fascist tendency in Europe, and noted that the Venezuelan extreme right validates the racist and colonialist tone of the Spanish extreme-right parties. “It is a threat,” he added, “because they want to raise fascist flags, and vindicate the genocide that took place against our peoples and against our country.”