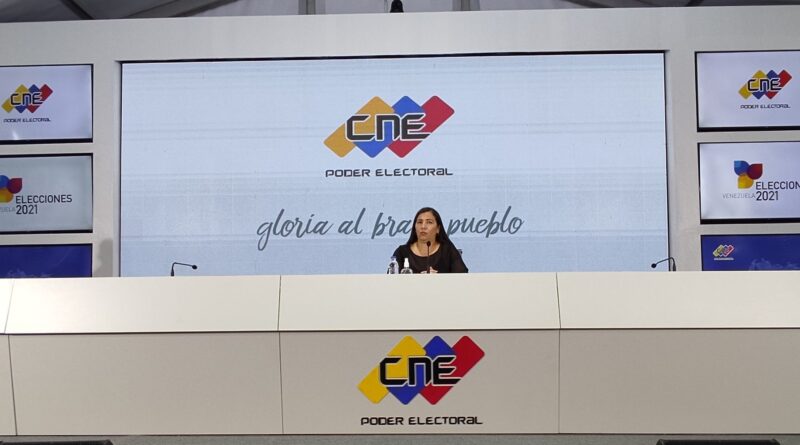 On Friday, November 19, the president of the National Electoral Council (CNE) of Venezuela, Pedro Calzadilla, informed that by Friday noon, 90% of the voting stations had been installed for the regional and municipal elections to be held this Sunday, November 21.

“The electoral material is already deployed, it is ready,” said Calzadilla in a television interview. “So far we have 90% of the tables installed.”

He assured that for this election, the international monitoring, accompaniment and observation program is very broad, given the importance of the elections in the political stability of Venezuela.

“We have worked with a great sense of commitment to fulfill a task, which is not only to organize an election, but to work for democracy,” stressed the CNE president.

The installation of the voting stations is a key step and the last most important one before any Venezuelan election. It happens on the last Friday before the election Sunday—in Venezuela elections are always held on Sundays—and the installation procedure consists of verifying whether all the voting machines and electoral material have arrived properly and are in proper operational condition at each voting center. This is done in the presence of the voting station staff and witnesses from all political parties participating in the election.

Later, on Friday night, CNE rector Tania D’Amelio updated the information and reported that 99% of the voting stations were already installed. D’Amelio also reminded all political parties that the electoral campaign ended on Thursday, November 18.

A few minutes later the CNE informed about the conclusion of the telecom infrastructure audit. “At CANTV’s facilities in Los Palos Grandes,” reported the CNE through a tweet on its official account, “the Audit of the Electoral Results Transmission Network (Telecommunications phase 1) for the elections to be held on Sunday was carried out this Friday, November 19.” The CNE further added that all the processes carried out were validated by technicians from the political organizations PSUV, MUD, MAS, PPT, UNT and Compa, the biggest political parties participating in the elections.

The CNE also informed that “the network configuration, as well as the computer security seals (hash and shared electronic signatures), will be verified again on Monday, November 22, in phase 2 (post-election) of this audit.” The communication also noted that the results transmission network does not use the internet as a communication channel; instead it uses an exclusive and encrypted network for the electoral event.

More than 150 international observers have been invited by the CNE to these elections, including an Observation Mission from the European Union. However, a total of over 300 international observers and companions are already deployed all over Venezuelan territory, including representatives from the European Union, CEELA, United Nations, and Carter Center, as well as various social organizations from different countries.

Calzadilla stressed the importance of the process in which more than 3,000 public officers will be elected, and urged citizens to exercise their right to vote and participate.

“The elections this Sunday call for the will of all,” said Calzadilla. “What is going to happen for the future of Venezuela is important.” He expressed his hope that there will be a great turnout in the elections in which over 21 million Venezuelans are eligible to participate.

Moreover, he added that the elections are taking place in the midst of the COVID-19 pandemic, so the entire electorate must comply with biosecurity measures to avoid contagion.

In this regard, he assured that “at the CNE we have all the guarantees of biosafety.”

Featured image: CNE rector Tania D’Amelio informing about the installation of 99% of the electoral stations in preparation for 21N regional elections in Venezuela. Photo: Twitter / @cneesvzla