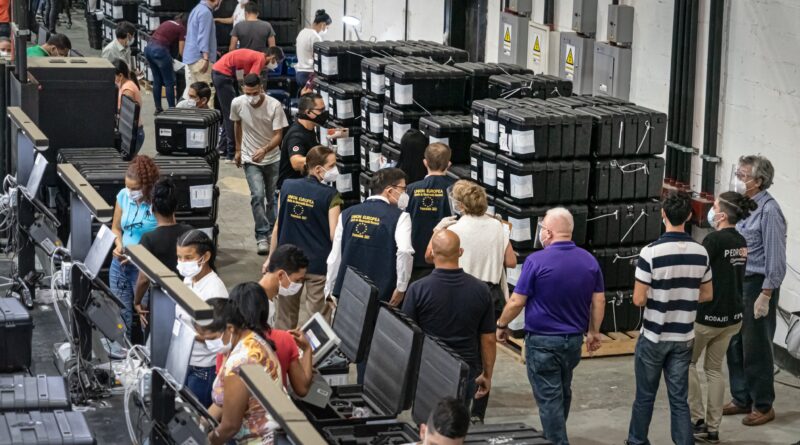 This Tuesday, November 9, a total of 1,875 voting machines were deployed across 19 of Venezuela’s 24 states, for use in the upcoming regional and municipal elections to be held on November 21.

CNE indicated that on Tuesday, 35 teams corresponding to four municipalities in Anzoátegui state (Bolívar, Aragua, Diego Bautista Urbaneja, and McGregor) and one in Miranda state (Acevedo) were selected to carry out the technical and operational diagnosis of the machines, as part of this audit. This is one out of 16 pre- and post-election audits executed to provide the utmost transparency to Venezuela’s electoral process.

The highest electoral authority highlighted that the activity was validated with the signature of the technical representatives of the various political parties, including Patria para Todos (PPT), the Democratic Unity Table (MUD), the Alliance for Change (APC) and the Venezuelan Popular Unit  (UPV).

The verification of the technological instruments for voting and the performance of operational tests of both the machine and the authentication system are essential procedures to guarantee transparent and secure elections.

European Union EOM working freely
The head of the European Union Election Observation Mission (EOM), Isabel Santos, ratified the independent, impartial, and neutral nature of the mission, and said that they have worked with total freedom in Venezuela. During a radio interview, the official made it clear that her team operates with total freedom of movement and total freedom of expression, and has been granted full access to observe the development of the electoral process.

On the other hand, in a comment perhaps made to create friction with Venezuelan authorities, Isabel Santos stated—regarding the EOM’s abilities to fulfill their functions in the country that—“if at some point that does not happen, it would violate administrative agreements. Because the agreement between the CNE and the EU delegation is based on that.”

The Election Observer Mission of the European Union is responsible for evaluating aspects of the campaign, its development, access to information outlets, messages from the candidates, and conditions under which the citizens exercise their right to vote.

The EU mission was in attendance earlier today, as reported on its Twitter account, where posts showed the EOM participating in the voting machines production audit underway at the CNE warehouse at Mariches, Miranda state.

“My role, apart from being very defined by the organization, is also defined by myself,” Santos said. “Those who know my curriculum and way of acting know that it is like that with me. There are no pressures, there are no links, only a strict commitment to the principles that regulate the mission.” This statement was made following comments by PSUV Vice President Diosdado Cabello about the suspicious role of some members of the European EOM.

The European delegation began its work on October 28. By election day they expect to have more than 100 delegates in attendance. More than 70 are already present in Venezuela. They are involved with the preparations for the election and the electoral campaign. Within the framework of their agenda, the European companions hold meetings with representatives of political parties, state institutions, officials of the Bolivarian government, and the media. According to their mandate, they must take care not to interfere in Venezuela’s internal politics, and respect Venezuelan rule of law.