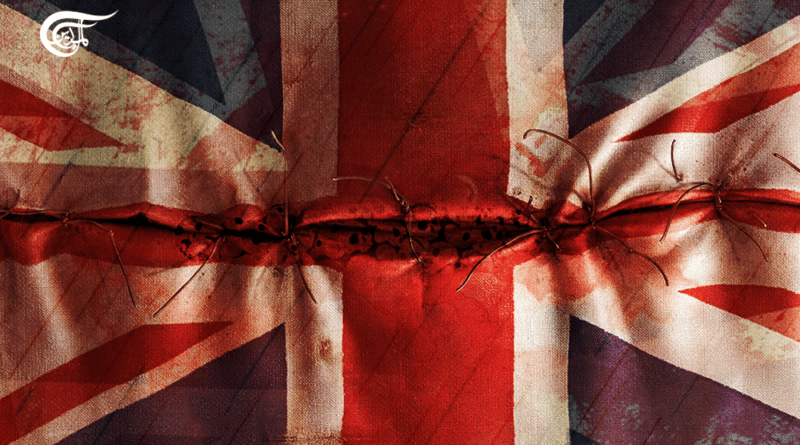 The British Empire was no different.

From North America to Australia. From New Zealand to Zimbabwe. From Ireland to Palestine, Britain has been accused of heinous war crimes against indigenous populations while extracting the wealth, minerals, and natural resources of those countries it occupied.

Through military occupation, colonization, and financial supremacy, empires have built vast fortunes, accrued in many countries, while the people’s culture and habitats have been destroyed.

By 1913 the British Empire ruled 23% of the world’s surface and 412 million of its people. A quarter of the globe.

Rarely if ever have these empires been held to account. To the victors go the spoils of war. The winners rewrite history and glorify their achievements in terms of morality, religion, or humanity.

Wars are always about power, money, and profit.

The establishment runs for the enrichment of the few.

We have gone from slavery to zero-hour contracts and the minimum wage.

Those who claim to rule in our name are ofttimes profiteers and corrupt self-serving politicians and monarchies.

They say the first casualty of war is truth.

When governments use propaganda to manipulate the public discourse for war such as the false claim of weapons of mass destruction in Iraq the truth is simply ignored, hidden, spun, or abandoned.

The truth is what your government tells you to be the truth.

With complicit media and compliant corporations, the truth is disguised and the lie becomes reality.

Malcolm X, famously said, ‘If you’re not careful, the newspapers will have you hating the people who are being oppressed, and loving the people doing the oppressing.’

Britain stands accused of numerous war crimes in the Northeast of Ireland.

Between 1969 and 1998 the British government was at war with the Irish Republican Army and the community from which it drew its support and legitimacy.

Having partitioned Ireland in 1920-1921, the scene was set for a national war of liberation, by the indigenous people, against foreign military occupation and an imposed colonial settler regime.

In 1998 with the signing of the Good Friday Agreement, many Republicans eschewed the right to resort to armed resistance, to remove the last vestiges of British imperialism in Ireland. They agreed to transition to political action only and to accept a vote for the possible reunification of Ireland at some future unspecified date.

As part of this process, a legacy consultation was begun.

The British army, its locally recruited militia, the Ulster Defence Regiment, its locally recruited police force, the Royal Ulster Constabulary now the Police Service of Northern Ireland and its myriad of intelligence services, undercover troops, and informers stand accused of murder, torture, assassinations, political killings and much much more.

The Ballymurphy massacre in West Belfast was perpetrated by the British Paratroop Regiment between 9 -11 August 1971, when Internment without trial was visited upon the Irish people in the North of Ireland.

600 British troops descended on the small community of Ballymurphy and over the course of three days, they shot dead ten civilians while another suffered a fatal heart attack.

A group of musicians traveling home was stopped by a military checkpoint. The soldiers detained the band members while two members of the patrol attempted to plant a bomb on board the minibus under the driver’s seat.

The bomb exploded prematurely killing two of the would-be assassins. The killers were actually members of a notorious murder squad known as the ‘Glenane Gang’ responsible for up to 120 deaths of mainly Catholics and nationalists.

The gang was made up of Police officers and UDR soldiers who were inextricably connected to British military intelligence operations.

When the bomb went off prematurely the decision was made to assassinate the band members.

The sole survivor Stephen Travers whom the gang thought they had murdered, was able to tell an investigation into this heinous crime, that the gang was led by a man with a strong military bearing and British accent.

He believed the bomb was designed to explode as the band continued its journey home.

The blame was to be placed on the band themselves or perhaps the Irish Republican Army.

Pat Finucane a civil rights lawyer was gunned down in front of his family while having their Sunday dinner on 12 February 1989.

Throughout the history of the ‘troubles’ from 1969-1998 persistent rumours of collusion between the state, its security forces, and loyalist terror gangs have surfaced on a regular basis.

Margaret Thatcher, Former British Prime Minister stood accused by the Nationalist/Republican community of “a shoot to kill” policy towards their members.

The indiscriminate use of plastic bullets and deaths caused by the army and police have been a constant source of bitter recrimination. State death squads are something more readily associated with Latin American dictatorships than a European democracy yet those accusations persist.

David Cameron in June 2010 in a prepared statement from the British House of Commons finally acknowledged that all those killed on 30 January 1972 were wholly innocent civilians. He made a formal apology on behalf of the government for the ‘unjustified and unjustifiable killings’ as reported in the Guardian newspaper.

Yet for decades the official Inquiries found those murdered had been armed terrorists and nail bombers.

Only this year after 5 decades, did a coroners court in Belfast in 2021, finally tell the world what the families and friends of those murdered in 1971 in Ballymurphy already knew.

They too were fully vindicated as being unarmed and not a threat to the British soldiers when they were killed. Calls have continued for a full and frank investigation into the murder of Pat Finucane. An inquiry has never been held.

We did not witness the actions of British soldiers running amok in Belfast, Derry, and Armagh.

We have seen the systematic use of force by the British state against its perceived enemies and the community from which they came.

While victims and families were hoping for closure and justice, the British government was proposing legislation that would effectively give the soldiers who committed war crimes against the Irish people, their officers, commanders, and political masters immunity from prosecution.

They were proposing that further investigations would not be mandated. No further inquests by the courts or prosecutions by the state would be forthcoming.

That journalistic investigations which may throw light upon some of these murders may become illegal?

The government is not just absolving the soldier’s, police, military, and intelligence services of all its war crimes but the British government too.

War crimes should have no moratorium. No statute of limitations. No amnesty for state murderers?

In 2013 Leigh Day acted on behalf of 5000 Kenyans who were subjected to torture, castration, rape, and brutality at the hands of the British Colonial administration.

The British government paid out 19.9 million pounds in compensation to its victims.

The British government wants to whitewash the history of its crimes in Ireland.

They have also proposed legislation that would prevent any further claims of compensation or prosecutions for those involved in British war crimes overseas to include Iraq and Afghanistan.

While the British Empire might have crumbled into dust and its only foreign aggression is at the behest of the United States, united in continuing to use military imperialism for resource theft in other sovereign nations. We should not, indeed we must not let these war crimes go unpunished.

No Justice No Peace!