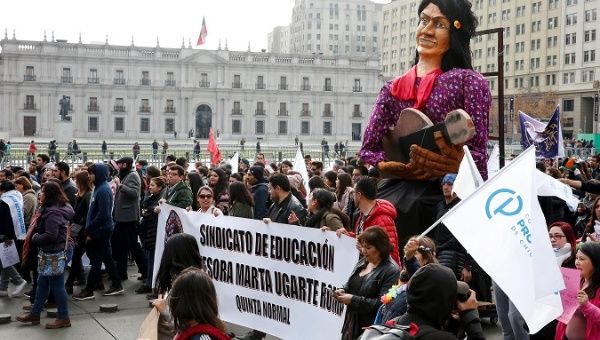 Chilean teachers are striking for the second consecutive week to protest against the deteriorating public education system.

Chilean teachers’ strike has entered the second week Monday due to lack of government responses to their demands for better working conditions and structural changes.

Around 70,000 members of the Chilean Teachers’ Association are striking for better working conditions, demanding the Ministry of Education to ensure adequate attention to public education and take measures to stop its deterioration.

The indefinite strike will have another demonstration Tuesday where teachers from all over the country will participate. It will culminate in front of the National Congress in Valparaiso.

The union said unemployment continues has increased and the strike will not be lifted until there is a satisfactory response from the government, which will be evaluated by the association.

Last Thursday a massive demonstration was called by the teachers in the capital city and many simultaneous demonstrations were held in other cities.

The march attracted more than 75,000 people from all over the country according to numbers provided by the teacher’s union.

The teachers’ association said they were protesting for structural issues within the country’s public system. Its president, Mario Aguilar, explained that there is a huge number of unresolved structural concerns which is why they will remain mobilized. Aguilar assured that this is not a wage claim but a protest to denounce the poor conditions of public education in the country.

“We have raised a petition that has nothing to do with readjustment of wages. We need people to know that we are not in this strike for wage readjustments which is the usual thing in a movement of this kind,” he said.

“We don’t have basic things like bathrooms amenities or pedagogical material, contributions from teachers remain unpaid and payments of salaries and wages are late.”