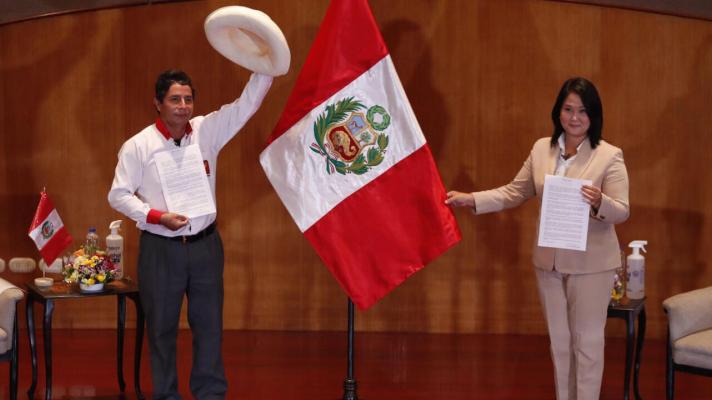 On Friday, June 4, the Robinson Institute released a report detailing the key points of the second round of the Peruvian presidential election, scheduled to be held on Sunday, June 6. The full translation of the report is presented here.

In the second round, the two most voted candidates of the first round appear. They are Pedro Castillo of Perú Libre party, and Keiko Fujimori of Fuerza Popular. Castillo and Fujimori respectively obtained 18.92% and 13.41% of the votes polled in the first round that was held on April 11, in which voter participation was 70%.

The candidates: Pedro Castillo, who initially did not rank among the top in the polls for the first round, won with a modest candidacy. His base of support is mainly in rural areas. He is a 51-year-old teachers’ union leader who gained publicity during a teachers’ strike in 2017 that lasted 75 days.

Keiko Fujimori is a presidential contender for the third time. She works as a business administrator and is the daughter of former dictator Alberto Fujimori (1990-2000), who is currently serving a 25-year sentence for corruption and crimes against humanity. Fujimori herself is under investigation related to the Lava Jato Case in Peru, where she has been accused of receiving bribes, amounting up to $1 million, from Brazilian transnational construction firm Odebrecht.

The Castillo campaign
Castillo’s motto is ”No more poverty in a rich country.” This leftist candidate has proposed structural reforms that imply a total change of the Peruvian economic model, among other measures, through the writing of a new Constitution to be drafted by a constituent assembly that would give the State an active role as a market regulator.

Castillo’s idea of ​​a ”popular economy with markets” seeks to implement the nationalization of strategic sectors such as mining, gas and oil. Although he is not against private trade and corporations, he states that it should always result in a ”benefit for the majority of Peruvians.” Additionally, Castillo proposes to significantly increase the agriculture and education budgets.

Fujimori’s ‘strong handed’ approach
Fujimori, the candidate of the traditional political establishment is in favor of the death penalty and of an ”offensive against corruption.” She promises to improve the quality level of teachers, of food subsidies and of doctors’ salaries, and to lower the cost of electricity. Fujimori has also offered to create 3,000 new drinking water networks and to donate 6 million computers to strengthen virtual education.

Fujimori defends the Constitution promulgated during her father’s dictatorship because, according to her, it helped generate more employment, attract more private investments and to ”rescue Peru from the clutches of terrorism” that had gripped the country after the economic and security crisis of the early 90s. However, Fujimori recognizes the social inequality gaps, and blames recent administrations for not properly applying the Magna Carta.

Why is the Peruvian presidential election important?
As an enclave of the neoliberal doctrine, Peru has experienced strong questioning over its conventional ideas concerning its political and public responses during the pandemic, particularly in regard to health.

The hierarchical status of the traditionally powerful ruling classes, economic elites, a cartelized press and criminal networks linked to politics have dominated Peru for more than 30 years of neoliberalism and anti-politics. During the second round campaign period, the elites have intensified their media offensives of terror and fear that speak of hypothetical risks to democracy, to a market economy and to a supposed economic prosperity that Fuerza Popular would preserve.

Fujimorismo is part and parcel of a political class that has abandoned the majority of the population during the pandemic and the associated quarantine period, causing 180 thousand deaths from COVID-19 in the name of not sacrificing the economy.

What the establishment defends is its control over government institutions, the continuity of its exclusionary model and the deepening of its privileges, particularly tributary privileges. In addition, the establishment political class seeks to implement a strong-handed approach that will impose and deepen an extractive and rentier model that increases dependency on the international market and which tramples over the people who protest against this exclusivist economic model.

Featured Image: Pedro Castillo and Keiko Fujimori are the candidates for the presidency of Peru. File photo.