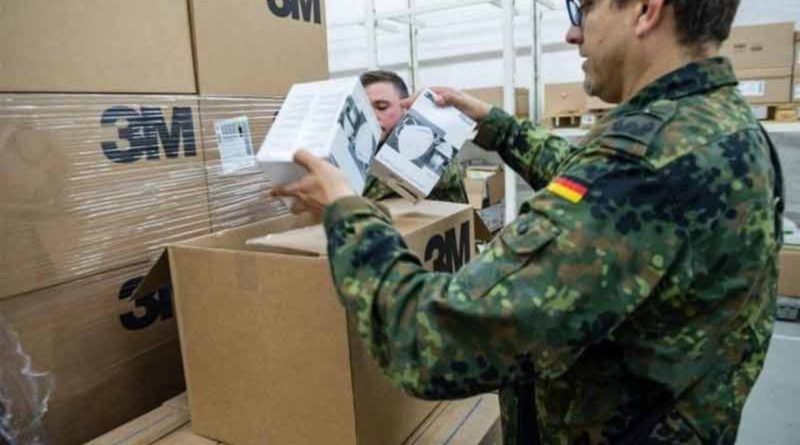 As in a street fight, blows are lost in a single melee. Western countries that, in times of “normality” prior to Covid-19, were already used to looting other regions, but taking care of appearances, now they steal face masks from any neighbor, without stopping to see if it is an ally or an enemy.

Modern pirates steal from each other

“Modern piracy”, The Guardian’s title for the facts, reviewing the villain par excellence of these times, although it is not the only one.

On the one hand, the United States is accused by Germany of having diverted a shipment of 200,000 N95 masks that was destined for Berlin. Taking advantage of a transfer between planes in Thailand, the supplies were sent to the United States, when they were supposed to go to Germany.

“This is not a way to treat transatlantic partners,” said Berlin Interior Minister Andreas Geisel.

On the other hand, France claims that they lost the opportunity to acquire another batch of these inputs when the Americans offered to pay three times the price to buy them, and paid in advance.

“We lost an order because the Americans bid higher for a shipment that we had already earmarked,” the president of the Paris region, Valérie Pecresse, managed to say, as the masks crossed the Atlantic to reach their NATO ally.

But the roles are interchangeable in this classic tale of capitalism.

“We are at war,” was the response Emmanuel Macron gave as a defense, after learning that France had confiscated an order for 4 million masks made in China and distributed by a Swedish company that were to reach Spain and Italy, countries where the new Coronavirus has collapsed the health systems.

In fact, the “war” measure was approved days before the cargo was requisitioned. On March 3, the French president announced a decree authorizing the seizure of any deposit of N95 masks, surgical gloves, and other medical materials related to the management of the pandemic. Two days later, the merchandise of the Mölnlycke company was blocked when it was to be distributed from Lyon.

After 15 days of diplomatic pressure, the French authorities agreed that half of the supplies be sent to Spain and Italy, their original destinations.

Likewise, Donald Trump moved according to Macron’s “run for your life” approach. From Washington, he signed an order, the National Defense Protection Act , which allows federal health and emergency offices to block the export of protective medical equipment, in favor of local demand.

Under that legislation, the White House was able to ban the US firm 3M, which makes industrial equipment in China and sells it inside and outside the United States, from exporting masks to Canada and Latin America.

3M stated in a statement that the decision would have “serious humanitarian implications”, with an emphasis on possible retaliation by the actors involved.

Because threats have to be answered with more threats, right? At least that’s what Canadian Prime Minister Justin Trudeau hinted at. If Canada is not given masks, then “thousands” of Canadian healthcare professionals who cross borders every day to work in American hospitals may stop doing so.

The coronavirus showed the true face of (neo) liberal democracy.

The gangster attitude before the pandemic

Some spectators who watch the scene are between amazement and outrage, like a newcomer to the world who discovers the common practices of capitalism.

But in Venezuela and dozens of other so-called “developing” countries, we know how that blockade formula goes, responsible for critical damage to societies living outside the perimeter of the West.

By 2019, over 46 countries were weighed down by sanctions from the United States, the European Union or the UN, and in some cases, by the three at the same time. These measures taken unilaterally harm all spheres of life, with a special impact on the economic and health sectors.

Iran , Cuba and Syria are some of the countries that have repeatedly denounced the impediments and obstacles that they must overcome in order to acquire medicine and medical equipment. What to say about Venezuela, which has an international campaign specifically focused on demonstrating the consequences of the blockade.

Let’s look at a case, as an “anecdote” of behavior that is natural in the first world: on February 7, 2019, Venezuela made, for a second time, a money transfer to the Pan American Health Organization (PAHO) to acquire vaccines against meningitis, rotavirus and influenza, after Novo Banco rejected the first transaction (allegedly due to US sanctions).

This time, the money was withheld by the Portuguese banking institution, supporting pressure from the Treasury Department against the Nicolás Maduro government and putting the health of 2.6 million Venezuelan children at risk.

Maybe the scramble can wait until this is over?

French Prime Minister Édouard Philippe acknowledged that there are concerns from medical staff that consumption of protective products, medications and respirators increased by 2,000%, “proportions never imagined,” he said.

Whether it’s New York, Detroit, or Chicago, nurse strikes are becoming more common in the United States. Some have said that they were forced to wear the same protective mask for a week; claims that show the state of abandonment in their hospital system.

If, from the outset, the United States and Europe had fought the spread of the new coronavirus with more rationality and caution, without delaying errors, perhaps they would not be in a panic fighting to snatch their masks.

But they have come this far, with no certainty that these supplies are properly distributed in hospitals and to the most vulnerable populations.

Because the signs seem to indicate that they will fall into the hands of resellers and that people will have to buy them twice or triple their real value. The bachaqueo (black market) is not only typical of economic distortions in Venezuela, but part of the usurious scheme of global neoliberalism.

Meanwhile, nations that are seen as authoritarian regimes are giving a master class of cooperation: China sending humanitarian aid shipments to Europe, Cuba deploying professional doctors to countries that require them, and Venezuela offering equipment for the detection of Covid-19 to Colombia.

The United States again exhibits its toxic relationship with the European Union. And the EU shows that it is a threat even to the countries that comprise it.