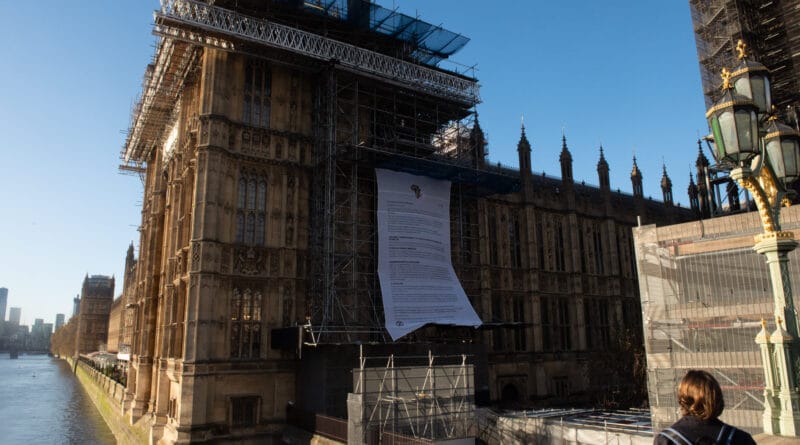 As part of their #ReRightHistory campaign, the Africans Rising organization unfurled an enormous open letter to the Queen of England today on the UK House of Parliament, demanding debt cancellation and reparations for centuries of exploitation through slavery, colonialism and imperialism. A smaller version of the letter was also sent to the queen by mail.

The action announced the launch of Africans Rising’s UK campaign. Activists from the Action for Climate Truth and Reparations (ACTR) group scaled the parliament buildings in the early morning and attached the giant letter — measuring about thirty-five feet in height — to construction scaffolding. They were quickly apprehended by London police.

“It’s time we take action against the devastating effects of a global history of racism. Its time we join the dots between social, racial and climate justice,” stated the Africans Rising organization.

It should be noted that when European or Western nations, and the global institutions they founded and control such as the World Bank, International Monetary Fund, or the Trilateral Commission, lend money to African nations as supposed “aid,” they are in effect lending them capital accrued from the ruthless exploitation of African labour and natural resources. These nations and organizations, under the guise of compassion, are essentially lending African nations money that was stolen from them in the first place — and then asking them to pay it back, usually with interest.

“We’re paying interest and debt-servicing on money which was ours,” explained renowned Kenyan author Ngũgĩ wa Thiong’o during a recent panel.

This stands in stark contrast, for example, to the United States-sponsored rebuilding of Europe after World War II whereby, through the Marshall plan, capitalist allies were given $15 billion, as a gift, in order to regain and retain their positions of global economic dominance.

Following independence, the exploitation of African nations continues to this day, as transnational corporations, with the complicity of neocolonial gatekeepers who act as politicians and business elite in African nations, propped up by the military alliance of AFRICOM (The United States African Command) and private mercenaries, and with the collaboration of the armies of vassal states, ensure that the legacy of massive capital flight continues.

The leaders of nations that attempt to deviate from this imperialist plan immediately find themselves in the crosshairs. Burkina Faso’s Thomas Sankara, Cameroon’s Ruben Um Nyobè, Democratic Rebublic of the Congo’s Patrice Lumumba, or Libya’s Muammar Gaddafi, comprise a small sample of those anti-colonialist or Pan-African leaders who were murdered and replaced with compliant regimes.

A June 2018 report by the Political Economy Research Institute (PERI) examining capital flight from thirty African countries from 1970 to 2015 found, to their surprise, a total of “documented losses of approximately $1.4 trillion over the forty-six year period ($1.8 trillion if lost interest is taken into account). This amount far outweighs both the stock of debt owed by these countries ($496.9 billion), as well as the combined amount of foreign aid all of the countries received over this period ($991.8 billion). The direction of capital flows actually makes the group of African countries a ‘net creditor’ to the rest of the world–a startling conclusion when contrasted against common perceptions about Africa.”

African nations rank as a “net creditor” without even considering those sixty million or more African lives lost to slavery, or the enormous profits that the slave trade, and the surviving slaves themselves, contributed to building capital in the Americas, Europe, and around the world. Nor does this “net creditor” status include the centuries of colonial exploitation within Africa prior to 1970, by European nations who literally worked their African subjects to death in mining, agriculture and industry, reaping untold profits while destroying the existing social and family systems, culture, and ways of knowing, from the 15th century onwards.

Founded in 2016, Africans Rising for Justice, Peace & Dignity includes over 20,000 members from more than 400 organizations. The Pan-African group is committed to organizing “against the norms of the conventional NGO internal governance,” and professes a critique of “systematically dysfunctional political leadership.”

“Britain was the largest coloniser of Africa and across the globe,” stated their letter in part. “It benefitted from and perpetuated the slave trade and thus owes a particular responsibility to redress the injustices of the past. Consequently, we appeal for these actions:

• An honest acknowledgement of the harm and human cost of slavery and colonialism.

• Cancellation of all African debt.

A similar letter was sent from the Africans Rising organization to the king of the country of Belgium, whose colonial possessions included today’s Burundi, Democratic Republic of the Congo, and Rwanda.