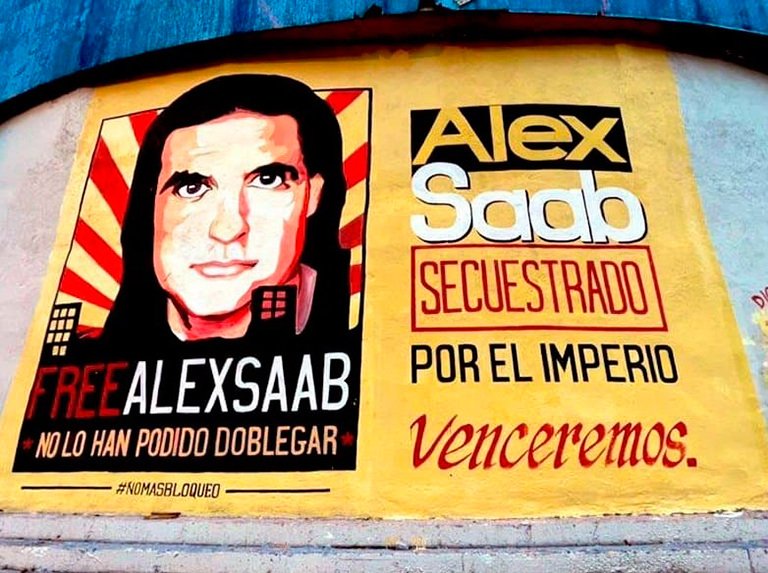 Poster in a street of Caracas with the face of Alex Saab and the following text: “FreeAlexSaab, you have not been able to bend him. Alex Saab was kidnapped by the empire,Venceremos!” Photo: William Camacaro.

A great deal has been written about the illegality of the arrest of Venezuelan Special Envoy Alex Saab. All of this has focussed on his entitlement to immunity and inviolability because at the time of his arrest in Cape Verde he was (and remains) a lawfully appointed diplomat of the Bolivarian Republic of Venezuela.

Briefly, it is worth noting that Alex Saab was arrested in the West African archipelago of Cape Verde on 12 June 2020. He made a refueling transit stop whilst en route from Venezuela to Iran in the course of undertaking a Special Mission. Cape Verde claimed at the time that it had executed the arrest (at the request of the United States) allegedly on the basis of an INTERPOL Red Notice published in the name of Alex Saab

• Be lawfully appointed by the Sending State (in this case Venezuela and which we know was done in April 2018)
• Carry documentation from the Sending State accrediting him to the Head of State in the Receiving State (in this case Iran). Alex Saab carried such documentation from both President Nicolas Maduro and Vice President Delcy Rodríguez.
• The Receiving State must acknowledge Special Mission and the Special Envoy. This Iran did in the days prior to Alex Saab’s departure from Caracas.

Another point to note here is that the Special Envoy is deemed to remain “on mission” until he returns home. In this case, however, Alex Saab was forcibly (and unlawfully) removed from Cape Verde to Miami. He did not elect to go to Miami, thus the interruption to his Special Mission is de facto force majeure and in no way negates his entitlement to diplomatic immunity.

The matter of Alex Saab’s entitlement to immunity is due to be heard by Judge Robert Scola in the Federal District Court, Miami, commencing on 12 December. There are credible rumors, however, that Alex Saab will feature prominently in a second round of a detainee swap as a sign of the thawing relationship between Venezuela and the United States.

Whilst the White House has refused to comment on a possible swap, observers note that having established a precedent on 2 October, President Biden has no option but to continue with further exchanges or face a political and emotional backlash from the families of Americans who continue to be detained in Venezuela. In turn, Venezuela and many other nations are pressing for the release of Alex Saab, whose detention they all argue flies in the face of centuries of established law governing the free movement of diplomats and political agents. They state that if Saab remains incarcerated, a dangerous precedent with risk to the entire global diplomatic order will have been established.

As stated at the outset, the emphasis of this piece is to draw attention to fundamental flaws with the indictment of Alex Saab which was handed down in July 2019.

On 21 May 2019, an article headlined “U.S. Prepares Charges, Sanctions Over Venezuela’s Food-Aid Program” appeared in the Wall Street Journal. The article highlighted how charges and sanctions were soon going to be brought arising from a lengthy and extensive investigation conducted by the Department of State, Treasury and law enforcement into Venezuela’s social welfare food programme known by its Spanish acronym of CLAP. The article, despite being several hundred words long, only names two people – Alex Saab and Alvaro Pulido (an alleged partner of Saab’s). Indeed, the article is long on unnamed sources but very short of any evidence to support the allegations made.

We know now that the article comes two weeks before a deadline imposed by US agents on Alex Saab to voluntarily turn himself in. This was set back in March and it was evident to the US that Alex Saab has no intention of meeting the deadline. What better way to put pressure on Saab than to plant a story on the Wall Street Journal to send a message to Saab that if he failed to cooperate then the US would do whatever it had to do to get him.

We learn the following from the article:

• The CLAP programme, introduced to provide basic foodstuffs to Venezuelans was riddled with corruption.
• This was based on information provided from Colombia (a country openly hostile to Venezuela at the time) and an ex-Venezuelan prosecutor (who had fled to Colombia when faced with allegations of corruption and herself is now the subject of US allegations of criminality).
• Extraordinarily, the WSJ knows that “sanctions are coming” a full two months before they are revealed publicly
• We are informed that Department of State, Treasury and law enforcement officials are “traveling around the world seeking assets.” Yet in recent Miami filings the DoJ has gone to extraordinary lengths to argue that the “Prosecution Team” involved in the arrest of Alex Saab in Cape Verde was narrowly limited to its own officers and no other departments and agencies of the US.
• The aim of the investigation and upcoming actions we are told is “to deprive the Maduro regime “of income the US believes is illegitimate.” Believes, but is unable to provide anything by way of evidence to support this belief.
• Anonymous US officials claim Alex Saab is “in control of a network…” based on information provided by the same unnamed Colombian and ex-Venezuelan officials, thus making the provenance of the allegations totally suspect.
• The fact that whoever fed this information to the WSJ was pulling out all the stops to impress the authors is clear when we read that it (WSJ) has been provided with and reviewed “foreign intelligence provided to the US”.
• There is then a clear attempt to hint that Alex Saab has been involved with money laundering and fraud on behalf of narco-cartels. The DEA is referenced as a source. This is right from the DoJ’s standard playbook. If all else fails, mention the “N” word – narco. There is zero evidence to support this slur on the character of Alex Saab then and now.

The ex-Venezuelan prosecutor, we are told, alleges, once again without any evidence being provided, that the CALP contracts were double the real value of the goods provided. We know this is false because the DEA itself has written in a report that only a 12% margin was made on the food contracts. This is a very normal level of profit and not even remotely close to the “billions of Dollars” that the article (and US sources) is claiming.

Finally, the most striking point is that the entire article is taken up with the alleged corruption around the CLAP programme. There is not a single defense to any abuses relating to Venezuela’s Social Housing Programme

How then to explain that on 25 July 2019, Alex Saab was indicted and sanctioned in relation to alleged abuses linked to Venezuela’s social welfare housing programme not CLAP.

What happened to the CLAP-related charges and sanctions that, according to the WSJ, were imminent? What happened to all the work done during the lengthy and detailed investigation by US officials based on foreign intelligence into the CLAP? The reality is that those in the US seeking the capture of Special Envoy Alex Saab, realized that they had absolutely no way to tie him to the United States.

None of the contracts to deliver foodstuffs involved US companies or persons, Alex Saab had not entered the United States for over thirty years and, very importantly, not a single cent had passed through the US banking system.

The only option left was to hastily engineer a series of sensational big money allegations complete with suspect co-conspirators in a desperate attempt to give the allegations against Saab a very thin veneer of plausibility. Hence the indictment related to the social housing programme in which proceeds of some the underlying contracts passed through US banks.

Unfortunately for the DoJ, the Geneva Public Prosecutor undertook a three-year long investigation of the money flows and in December 2020 concluded that there was no evidence to support allegations of money laundering. It is also impossible to accept that if, as the US alleges, US$350 million of illicit funds passed through the New York branches of 5 global financial institutions, that not one of them found anything suspicious in these transfers. Why has the DoJ, the Treasury, New York Department of Financial Services (responsible for regulating these banks) and the Federal Reserve all of whom have the task of supervising and monitoring these banks never had reason to question these same money flows? The answer is simple. There was nothing illicit or suspicious in these transfers.

The result is that in its haste to engineer a prosecution, any prosecution of Special Envoy Alex Saab, the DoJ is left with a significant egg on its face and a prosecution rapidly falling apart.

William Camacaro is a Venezuelan-American  National Co-Coordinator in the Alliance for Global Justice. He was a co-founder of the Bolivarian Circle of New York “Alberto Lovera” and Senior Analyst for the Council on Hemispheric Affairs (COHA). He holds a Master’s Degree of Fine Arts and a Master’s Degree in Latin American Literature from City University of New York. William has published in the Monthly Review, Counterpunch, COHA, the Afro-America Magazine, Ecology, Orinoco Tribune and other venues. He has organized delegations to Ecuador, Bolivia and Venezuela. He has been a long-time activist for social justice in the United States, such as organizing protests against police brutality in NYC, for the independence of Puerto Rico, and for the freedom of political prisoners. William has also been a leader in defense of progressive governments and social movements in Latin America.