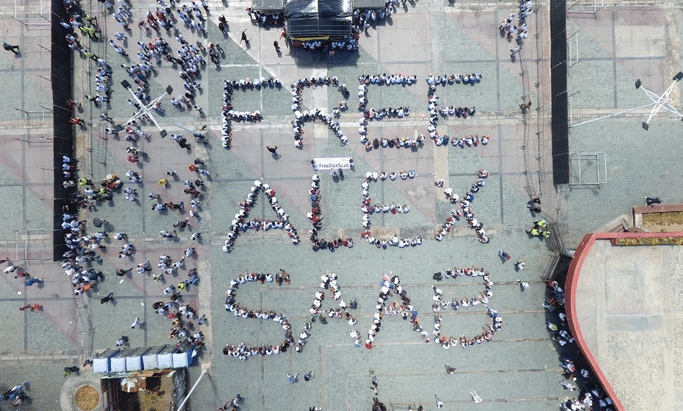 The Venezuelan diplomatic agent Alex Saab denounced his treatment in an interview with the Cape Verde’s major media outlet. Saab, who has been imprisoned for eight months, said that he’s being tortured and doesn’t have access to specialized medical care despite suffering from cancer. To make matters worse, he is forced to tell lies about Venezuela. He added that his “house arrest is a scam. They transferred me from one prison to another.”

Similarly, he regretted that 50 people control all his actions and try to get him to “voluntarily consent to extradition.”

“This intimidation is nothing more than physiologically torture, but I won’t give up,” he said. “Cape Verde hasn’t shown respect for my human rights since the first day of my illegal detention.”

Saab was granted various benefits by the Economic Community of West African States (ECOWAS), but Cape Verde refuses to honor them.

“This impression was reinforced by the contempt Cape Verde showed for the decision of the ECOWAS Court of December 2, 2020,” said Saab, “forcing it to give me access to the specialized medical care I need.”

United States influence
The illegal detention and cruel treatment of Saab is directed from the United States. The diplomat assured that he has no open cases in any country in the world, and has never been tried.

RELATED CONTENT: He has Diplomatic Immunity: Alex Saab Defense Requests Suspension of Extradition to the US

He explained that Cape Verde is dominated by Washington’s interests, but hopes that the rejection of sanctions can reverse this situation.

“They gave in to pressure from the Trump regime, whose extraordinary use of unilaterally imposed sanctions was declared illegal,” recalled Saab, referring to the recent visit to Venezuela of United Nations Special Rapporteur on the effects of sanctions on human rights, Alena Douhan, who in her preliminary report acknowledged the terrible effects of European and US sanctions and economic blockade on millions of Venezuelans.

Concerned about his health
The diplomatic agent said he felt debilitated, as he suffers from cancer and his oncologist has not received permission to see him despite being in Cape Verde. Saab recounted that on only two occasions has a doctor been allowed to evaluate his physical condition, which are worsened by his torture.

“Since the beginning of my illegal detention, I’ve never been allowed to see the results of any medical exam and test,” he said.

This Saturday, social movements, political parties and Venezuelan deputies held a march to the Nigerian embassy and the United Nations office in Caracas. The purpose of the demonstration was to deliver a letter to each diplomatic headquarters demanding the release of Saab, and condemning the sanctions.

RELATED CONTENT: Alex Saab: I am being Detained with the Sole Aim of Overthrowing President Maduro (Irregular House Arrest)

Full interview
Journalist: How do you feel about the house arrest?
Alex Saab: How would you feel with 50 people controlling all your movements 24 hours a day? They wear the same black facemasks worn by those who tortured me in prison, encouraging me to voluntarily consent to extradition and provide false information against Venezuela. This intimidation is nothing more than physiological torture, but I won’t not give up. My house arrest is a scam. They transferred me from one prison to another. The fact is that I am not a criminal and have never been convicted of a crime. Cape Verde has not shown respect for my human rights since the first day of my illegal detention. This impression was reinforced by the contempt Cape Verde showed for the ECOWAS Tribunal’s decision of December 2, 2020, forcing it to give me access to the specialized medical care I need and, finally, for the way in which I was transferred to house arrest.

Journalist: How is your health?
Alex Saab: I am constantly stressed and harassed. The police deliberately walk around me with guns, even when my room is being cleaned, the cleaning lady is followed by a policeman with a loaded pistol. When I go out to the garden, there are drones flying overhead. I don’t feel well. In eight months, Cape Verde sent a doctor twice to examine me. He’s a personable man, but he’s not qualified to solve my medical problems. Since the beginning of my illegal detention, I’ve never been allowed to see the results of any medical tests and examinations. I need specialized medical care from a doctor I can trust. When my oncologist arrived in December, after the ECOWAS Court ordered Cape Verde to provide me with access to specialized care, he spent a week waiting for approval from the Minister of Justice, who didn’t even bother to respond to various requests. For your information, requests remain unanswered to this day. Is this your “model of African democracy”?

Journalist: How is your family, and how do you communicate with them?
Alex Saab: They are worried. My four-year-old daughter doesn’t understand why I haven’t talked to her in almost a year. She constantly asks where I am. She turned four on Tuesday and I couldn’t even wish her a happy birthday. My youngest daughter just turned one in January and it’s another family milestone that I missed. My wife and five children applied for visas to stay with me, but I get the usual response, which is none.

Journalist: Do you have faith in justice in Cape Verde?
Alex Saab: I have been informed by reliable sources that senior members of the judiciary are experienced people who are known to respect and uphold the Constitution of Cape Verde and international legal obligations. On the other hand, the executive has been cowardly, Machiavellian and unreliable. The good name of Cape Verde is being destroyed by these people. Take, for example, the shameful departure of Tavares. He is associated with far-right neo-Nazis in Portugal and Miami, even naming one of them as an honorary consul.

Journalist: Why do you think the Cape Verdean government got involved?
Alex Saab: You should ask the government this question, and also what the benefit is. The truth is, they had no reason to get involved. They should have respected the centuries-old international law governing the movement of diplomats and political agents. Instead, they gave in to pressure from the Trump regime, whose extraordinary use of unilaterally imposed sanctions was declared illegal by the United Nations last week.

Featured image: This Saturday, February 20, a concert was organized in Caracas to demand the liberation of Venezuelan diplomatic envoy Alex Saab. Photo courtesy of @justiceAlexSaab.