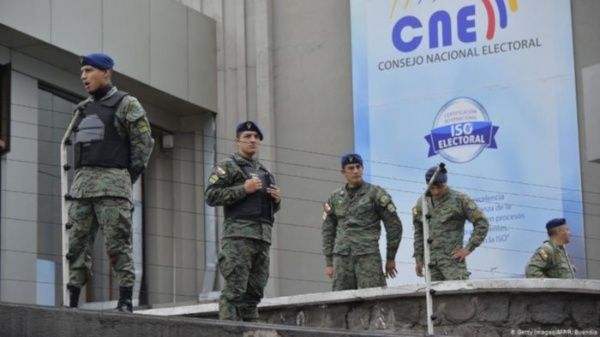 Ecuador’s presidential candidate Andrés Arauz considered the interference of state entities in the electoral process a blow to Ecuadorian democracy.

This Sunday, Arauz, candidate for the Union for Hope (UNES) coalition, alerted media that the second round of the elections, scheduled for April 11 in the South American country, are in danger as a result of government meddling in the electoral process.

At a press conference, Arauz, winner of the first electoral round, rejected the “interference and rude meddling of other State institutions in electoral functions,” referring to the latest actions of the Ecuadorian Prosecutor’s Office and the Comptroller’s Office.

In his complaint, the politician called on the international community and electoral observers to be attentive to the electoral process due to the threat posed by the intervention of the state in the National Electoral Council (CNE).

RELATED CONTENT: Ecuador’s CNE: Lasso Will Be Arauz’s Rival in Second Round

Arauz was responding in particular to the request of State Comptroller General, Pablo Celi, who sent an official letter to the National Electoral Council (CNE) reporting on an audit of the CNE computer system used for the first round of presidential elections on February 7.

“We took actions in Quito and Guayaquil, in the presence of our observers at the CNE, acting as citizen overseers, faced with this threat of interference in the electoral process,” said Arauz. “Let us not allow any decision to modify the electoral calendar and the second round scheduled for April 11, because it threatens democracy.”

Arauz commented that the functions of the State must rise to the occasion and contribute to democracy without interference. “These are not isolated cases,” said Arauz. “The Comptroller’s Office previously interfered when it tried to eliminate political parties—including ours.”

The State Attorney General’s Office announced a “collection of digital content from the database that administers the electoral computer system” to carry out “forensic computer expertise.”

“The data is there, it’s easily reviewable and it’s not necessary to remove the computer equipment” from the National Electoral Council (CNE), said Arauz. He asked the international community to be vigilant because there have also been attempts “to prevent the holding of the second round of elections in a timely manner.”

Arauz insisted that the current government of Lenín Moreno “cannot stay one day longer than the constitutional term,” which ends on May 24, when “the candidate who is democratically elected must replace him.”

On Saturday the Prosecutor’s Office announced the database exercise, and the State Comptroller General requested that the CNE conduct an audit of the computer systems used in the February elections.

These notifications were issued hours before the CNE announced the final results of the first round of presidential elections, and reported that Arauz and center-right candidate Guillermo Lasso will go to a second round, although the candidates can still file some appeals.

Featured image: Candidates warned against a CNE “attack on democracy” during the audit. | Photo: Radio LaCalle.