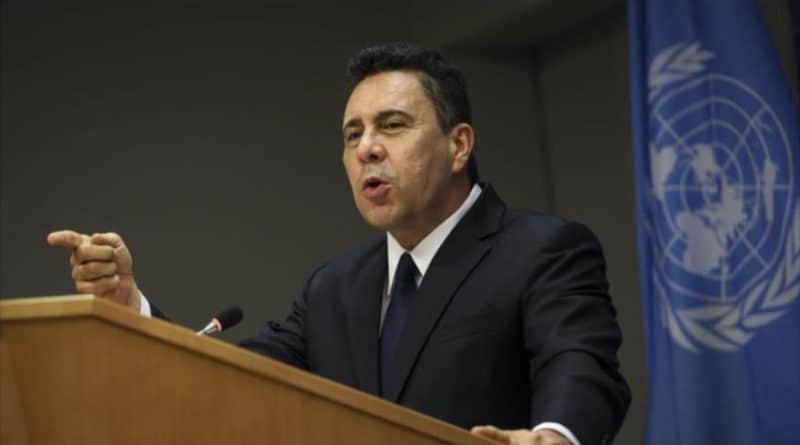 The Venezuelan government denounces the “genocidal” management of the United States to the UN Security Council for using “the pandemic as a weapon against Caracas.”

The Venezuelan ambassador to the United Nations (UN), Samuel Moncada, in a letter to the permanent representative of the Dominican Republic to the United Nations, José Singer Weisinger, issued on Monday, but released on Wednesday via Twitter, questioned the management of the government of the US president, Donald Trump, and his allied countries, which amid the global crisis caused by the pandemic of the new coronavirus (causing COVID-19), take advantage of this serious situation, using it as a “weapon” to put pressure on Venezuela.

“Today we denounced before the Security Council of the UN the genocidal policy Trump and colonialist allies, creating a second humanitarian disaster using the pandemic as a weapon against our people,” the Venezuelan diplomat said in a message posted on his account the social network Twitter.

RELATED CONTENT: At UN Russia Condemns US Attempts to use Covid-19 to Increase Military Pressure on Venezuela

The senior Venezuelan official made it clear that, since at least 2015, the United States, the United Kingdom and other allied countries have imposed various illegal sanctions, that is, an economic, commercial and financial blockade of the Caribbean country “(… ) in an illegal action that repeats itself in the XXI century, the same acts of colonialism that characterized the nineteenth century,” Moncada stressed.

Along the same lines, he censured Portugal, Germany, Belgium and France, among other European states, for imposing “coercive” embargoes on Venezuela and warned of the “complicity” between these nations.

In addition, in another part of the letter, the Venezuelan ambassador referred to Washington’s sanctions against the state-owned company Petróleos de Venezuela (PDVSA) and said that these measures by Trump’s regime against the Bolivarian nation have caused a decrease in Venezuela’s income by more than 90%, that is, its profits have gone from close to $ 42 billion in 2013 to almost $ 4 billion in 2018.

This “illegal and unilateral blockade imposed by the United States (…) as of February 2020, has represented losses amounting to more than 116 billion dollars,” Moncada added.

He also recalled that the resources the Bolivarian nation now lacks could have been used to strengthen the current successful fight against the pandemic, and to guarantee the supply of basic goods and services, including, among others, food and medicine.

The gasoline shortage in Venezuela, which already existed in the country due to White House sanctions, has worsened since the beginning of the COVID-19 outbreak.