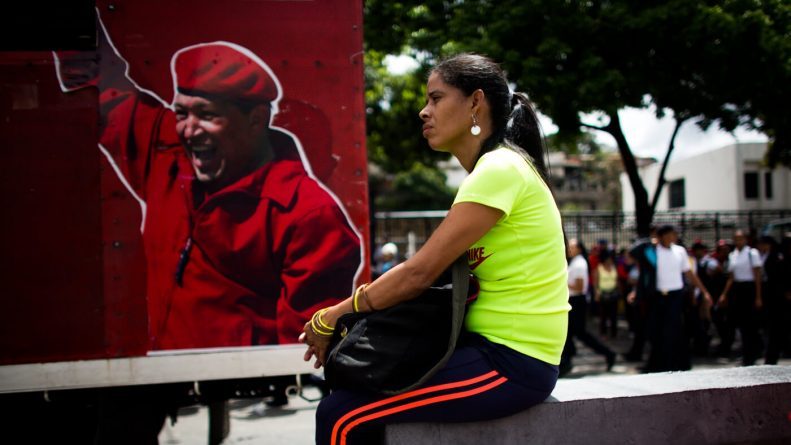 Shortly after meeting with Juan Guaido, Amnesty International put out a report that reads like a barely disguised attempt to reinforce, from a ‘human rights’ angle, the military threats against Venezuela from Trump and his henchmen.

Amnesty International‘s reports, by their nature, require readers to trust their honesty and impartiality. But there is ample reason not to trust them. Because Amnesty has ignored grave human rights abuses in plain sight in Venezuela while demonizing supporters of Venezuelan President Nicolas Maduro.

Shortly after meeting with Juan Guaido (whom Donald Trump and a new Iraq-style Coalition of the Willing have anointed as Venezuela’s interim president), Amnesty put out a report that reads like a barely disguised attempt to reinforce, from a ‘human rights’ angle, the military threats against Venezuela from Trump and his henchmen.

Team Trump as Venezuela’s “Only hope”?

International justice is the only hope for victims of human rights violations in Venezuela. It is time to activate all available mechanisms to prevent further atrocities.”

And the report stated that:

[C]ountries genuinely concerned about the human rights situation in Venezuela should explore the application of universal jurisdiction.

Amnesty’s allegations about Venezuela are serious and, if true, deserve condemnation. But there are numerous reasons to question the group’s honesty, impartiality, and public statements.

Somebody should ask Amnesty, for example, to list the countries which are “genuinely concerned”. How many Saudi–arming countries like the US, UK, Canada, and France are on that list?

As Amnesty released this report, the threat of a US military attack on Venezuela disguised a “humanitarian aid delivery” could not be more obvious. Never mind that Venezuela is, in fact, receiving foreign aid with authorization from the Maduro government. US National Security Advisor John Bolton and Senator Marco Rubio have repeatedly made Mafioso-like threats against Venezuela’s military and Maduro. Trump himself has been repeatedly threatening a military “option” since 2017 (the year he reportedly asked “Why are we not at war with Venezuela?”).

Amnesty ignores Trump’s attack on the right to health and food
At the same time, Amnesty has refused to denounce Trump’s financial sanctions which have been in place since August 2017 and whose impact on the entire economy has been crippling. By now, the sanctions have cost Venezuela’s government well over $6bn in revenues in an economy that imported $11.7bn in goods in 2018. Before the deep and sustained collapse in oil prices (and oil production, which nose-dived as the sanctions began), Venezuela’s economy had been importing about $2bn a year in medicines.

It is important to remember that, in Venezuela’s case, Amnesty has been very explicit in pointing to economic problems as human rights abuses. Last year, when they wrote to me refusing to denounce Trump’s sanctions, Amnesty said:

Amnesty International does not take a position on the current application of these sanctions but rather emphasizes the urgent need to address the serious crisis of the right to health and food which Venezuela is facing. In terms of human rights, it is the Venezuelan state’s responsibility to resolve this.

As I’ve noted at The Canary, Amnesty has now updated its position on Trump’s sanctions. It absurdly asks Trump to please be careful and “monitor” the impact of new sanctions that he imposed in January. The new sanctions directly cut off revenues that the Venezuelan government obtained from sales to the US. Amnesty’s continued refusal to acknowledge that a devastating attack on the Venezuelan “right to health and food” has been ongoing since August 2017 is appalling. And that alone is an excellent reason to doubt the honesty and impartiality of their work on Venezuela. Because any credible human rights group would demand an immediate end to all the economic sanctions Trump has imposed.

Violent crime in Venezuela
Amnesty also stated in its latest report that:

The more impoverished areas of Caracas and other parts of the country were particularly affected and stigmatized, registering the highest numbers of victims, who were later presented as ‘criminals’ killed in clashes with the authorities.

There’s no doubt that Venezuela’s security forces have committed crimes. The Maduro government has conceded as much. And Venezuelan police officers were arrested for crimes perpetrated during the violent protests of 2017. In June 2017, Defense Minister Vladimir Padrino López publicly warned security forces in remarks broadcast on state TV that he didn’t “want to see one more national guard perpetrate an atrocity”. Those protests were the fifth US-backed effort to oust the government by force since 2002. Trump is now leading the sixth.

It’s also important to remember that Venezuelan security forces have confronted a very high homicide rate (since long before the current government came to power) and police officer death rate. At the same time, the country has been plagued by violent US-backed protesters for years, who have done things like burn Afro-Venezuelans alive in the streets and murder police officers. And today, it faces the very grave threat of US invasion that would install the most violent opposition groups into power.

We can only imagine how security forces in a country like the UK would behave under the above conditions. Young men have been sent to prison in Britain, for example, simply for writing Facebook posts that advocate riots. I made some of these points last year in response to a similar UN report that was hyped by Reuters.

Venezuela’s very real homicide problem (and violent US-backed opposition problem) could indeed allow security forces to pass off extrajudicial executions as “fighting crime” or as self-defense. But it can also allow apparently partisan groups like Amnesty to distort the situation in support of Trump’s regime-change agenda.

Propaganda groundwork for dirty war on Maduro supporters?
Amnesty said in its report that:

There is a strong presence of pro-Nicolás Maduro armed groups (commonly known as “colectivos”) in these areas, where residents depend to a large extent on the currently limited state programs to distribute staple foods.

Again, the “limited state programs” would be the ones Trump has been viciously attacking through sanctions since 2017. Also notice how Amnesty casts as thugs the organized poor people distributing food to millions of people – up to 60% of households according to an opposition-aligned pollster (Datanálisis).

As George Ciccariello-Maher explained in We Created Chavez, the history of poor people organizing and arming themselves (quite understandably) for self-defense in Venezuela’s poorest neighborhoods goes back decades. It’s not new.

It is Maduro’s supporters in poor neighborhoods and in the countryside, however, who – armed or not – will be violently targeted if the US-backed opposition takes power; especially if they do so in a coup or through a US invasion. Amnesty appears to have little concern about “stigmatizing” them, though, and negligible concern about Trump’s attack on their “right to health and food”.

All of the reasons above make a powerful case for questioning the integrity and objectivity of Amnesty when it comes to Venezuela. And for the sake of peace and justice, we should hold Amnesty to much higher standards.

Top Photo | A supporter of Venezuela’s President Nicolas Maduro sits next to an image depicting the late president Hugo Chavez during an anti-intervention march coinciding with the anniversary of the deadly 1989 social uprising against neoliberal measures known as the Caracazo, in Caracas, Venezuela, Feb. 27, 2019. Ariana Cubillos | AP