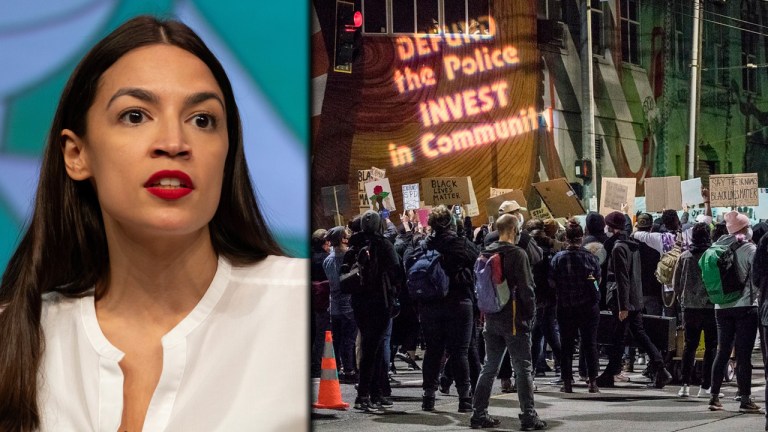 An anti-war activist was visited by California Highway Patrol officers after posting video of Rep. Alexandria Ocasio-Cortez’s bumbling comments on Israel-Palestine. The action, which AOC denies triggering, was initiated by a call to US Capitol Police.

As he waited for a food delivery at his home in Los Angeles on April 8, Ryan Wentz, an anti-war activist and producer for the online viral program Soapbox, heard two men calling his name from over his front gate. When he approached, he realized they were not delivery drivers, but police officers flashing badges of the California Highway Patrol.

The cops informed Wentz that they had received a call from the Capitol Police, the federal law enforcement agency tasked with protecting the US Congress, about a tweet he had sent that allegedly threatened Rep. Alexandria Ocasio-Cortez.

Wentz told The Grayzone, “The officers said, ‘We got a warning about a sitting member of Congress. And it was because of your tweet, which tagged them in it.’ And then they just wouldn’t back down from this accusation that I threatened to kill her.”

(1/X) I’m really shaken up right now. I was just visited by two plainclothes police officers from California Highway Patrol at my home. They said they came here on behalf of the Capitol Police and accused me of threatening @AOC on Twitter yesterday. This is provably false. pic.twitter.com/NGR8KViy93

The California Highway Patrol indicated on Twitter that it had acted on a call from Capitol Police.

Update: A spokesperson for AOC has denied to Intercept reporter Ryan Grim that their office reported Wentz’s post, and has “asked Capitol Police to look into what happened here.”

The police visit Wentz received may have been part of a wider trend of post-January 6 law enforcement intervention in social media criticism of members of Congress.

Shouldn't @CHP_HQ be tagged in this to verify or have chance to deny?

Though AOC’s office has denied falsely informing Capitol Police of an online threat by Wentz, the Democratic congresswoman has in the past asked her supporters to report critics to social media censors.

Whoever called the police on Wentz furnished law enforcement with a patently false allegation, as he has never threatened violence against any member of Congress.

RELATED CONTENT: AOC Ripped Over Her Claims of ‘Close Encounter’ With Capitol Rioters in Separate Building

In the tweet that triggered the police action, Wentz merely posted video of AOC delivering a vapid and embarrassingly convoluted answer to a question about resolving the crisis in Israel-Palestine. Describing her answer as “incredibly underwhelming,” he let the congresswoman’s cringeworthy commentary speak for itself.

On April 1, @AOC did a livestream with Michael Miller, the head of the Jewish Community Relations Council of New York. She was asked about “peace between Israelis and Palestinians.”

Her response was incredibly underwhelming, to say the very least: pic.twitter.com/qHdwTy5pVO

Asked by Michael S. Miller of the New York Jewish Community Relations Council about actions that could be taken to support movements towards peace between Jewish Israelis and Palestinians, AOC responded as follows:

“Earlier just now you and I were talking about the what and the how. And I think that when we talk about peace, centering people’s humanity, protecting people’s rights – it’s not just about the what and the end goal which actually gets a lot of focus, but I actually think it’s much more about the how, and the way we are coming together, and how we interpret that what, and how we act in, you know, the actions we take to get to that what.

So what this really is about is a question more than anything else about process. And we really need to make sure that we are valuing a process where all parties are respected and have, you know, a lot of equal opportunity to really make sure we are negotiating in good faith, etcetera. That being said, you know, I think there’s just this one central issue of settlements, because if the what – if the what has been decided on as two state, then the action of settlements, it’s not the how to get to that what.

The video that Wentz tweeted of AOC’s long-winded dodge of a fundamental question about resolving the Israeli occupation of Palestine prompted a flood of online mockery and contempt, mostly from leftist Twitter users. Many derided AOC as a careerist who had abandoned progressive causes like Palestinian liberation in order to curry favor with Democratic Party power brokers, while others ridiculed her meaningless word salad.

This is a very easy issue for a leftist, why is AOC struggling?

Isreal is an apartheid state that should be Defunded

I'm incredibly impressed with @AOC's Obama-like ability to fill large amounts of time with words while saying absolutely nothing. I challenge anyone to tell me what she just said. https://t.co/hIkWTNR5Rp

Within hours of the online pile-on, someone reported Wentz to the Capitol Police for tweeting the video that embarrassed AOC. Because Wentz does not provide any information about his personal identity in his public Twitter profile, the social media giant appeared to have provided his private details to federal law enforcement.

“Another weird thing is usually I would get a report [from Twitter],” Wentz said, “because I’ve gotten my tweets reported before. But I didn’t get any notification about this.”

AOC’s staff has previously appealed to social media censors to suppress online criticism. On February 4, 2021, her campaign sent a mass email to supporters asking them to “scan your social media to find posts with misleading information” about the congresswoman, and “use the built-in report feature to flag them for moderators.”

Team AOC issued its appeal for supporters to police social media in response to right-wing mockery of a dramatic livestream in which AOC suggested that the mob which stormed the Capitol building on January 6 nearly assassinated her.

“I just hear these yells of ‘WHERE IS SHE? WHERE IS SHE?’” she recounted in the livestream. “This was the moment where I thought everything was over. I thought I was going to die.”

However, the source of the yells which had terrified AOC turned out to be a Capitol Police officer who had been dispatched to protect her. Further, the congresswoman’s office was located in the Cannon House Office Building, which had not been penetrated by any rioters on January 6.

Right-wing activists and other political foes of AOC exploited these points to launch a viral hashtag likening the congresswoman to Jussie Smollet, the actor who faked an attack on himself. After attempting to challenge her critics directly, AOC delegated her staff to dispatch its army of supporters to report critics en masse to Twitter and Facebook censors.

Weeks earlier, podcaster Jimmy Dore had initiated a “Force The Vote”campaign to pressure AOC and fellow members of the progressive congressional “Squad” to withhold their votes for Rep. Nancy Pelosi as speaker of the House until Pelosi agreed to bring a bill for Medicare for All to the floor for a vote.

In response to incendiary criticism from Dore for her refusal to buck centrist party leadership, AOC declared, “That’s not tone, that’s violence.”

RT: briebriejoy “15 million people have lost their employer-based health care in the middle of a global pandemic, and barely half of House Democrats support Medicare for All even though 88% of their constituents do.

According to Wentz, the police officers that visited him asked if he had any violent intent behind his tweet, then left. “If this was like a purely intimidation thing,” he reflected, “then I guess it did its job. It’s not comforting to be on the receiving end of that. But at the same time, they’re not going to shut the left up.”

Wentz’s disturbing encounter with law enforcement appears to be part of an emerging trend. On the same date law enforcement visited him, a Twitter user posted photos of alleged federal agents on their front lawn and claimed, “FBI just came by my house for a tweet to Ted Cruz.”

FBI just came by my house for a tweet to Ted Cruz. pic.twitter.com/cbwouoz4GC