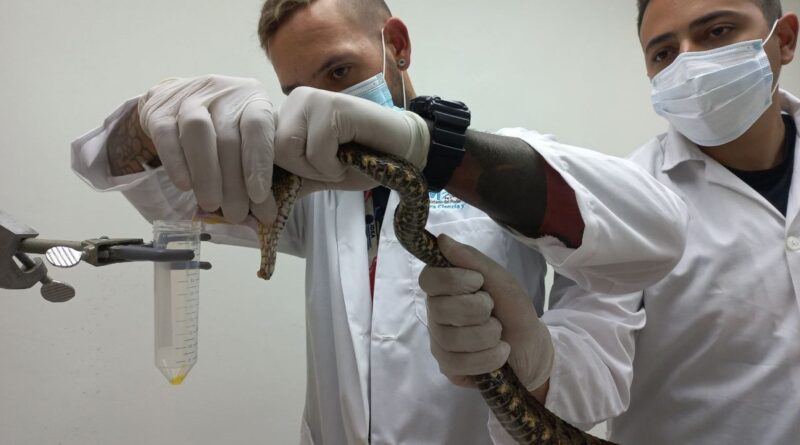 The antivenom, developed in Venezuela, has already been tested on 40 people and has not shown any adverse effects.

The saying that “the snake is killed by the head” is not valid, if one considers that it is precisely in the snake’s own venom that the antidote for its bite is found. Some new antivenoms are currently being developed in Venezuela to counteract the effects of snake and scorpion bites. These antidotes are made with IgY technology based on chicken antibodies and, so far, have been tested on 40 people. No adverse reactions have been reported.

José Contreras, a researcher and snake expert at the Institute for Advanced Studies (IDEA), told RT about a project currently being carried out in conjunction with the Francisco de Miranda Experimental University, in the central-western State of Falcón. The project focuses on the production of alternative antidotes at lower costs in order to increase their availability and accessibility in remote parts of the country, where the frequency of snakebite accidents are higher.

Contreras says that he fell in love with snakes at the age of 11, when he arrived at the Institute of Tropical Medicine at the Central University of Venezuela (UCV). “I entered as a volunteer washing fish tanks in the serpentarium and I stayed there until I was 21 years old,” Contreras said. From there, he went on to work at IDEA.

Contreras gained his ability to handle snakes empirically, in a self-taught way. In Venezuela there is no professionalization of such a skill within academia. So Contreras had to commit to a formal self-training to meet the standards of the research institute to which he belongs.

Seated in his IDEA office which overlooks the Sartenejas Valley, in Baruta municipality of Miranda state, Contreras told RT that he has never suffered an accident in the 13 years he has been extracting the poison and “milking” the snakes. He states that the key is “to respect and observe the behavior of these animals that play a role in maintaining environmental balance.”

What is an antivenom?
An antivenom is an antidote drug produced from the poison with which it was created. In Venezuela, the best known antivenom is the one produced by the Biotechnology Center of the Faculty of Pharmacy at the Central University of Venezuela (UCV). This antivenom is a polyvalent which neutralizes the effects of the bites of various snake species.

In Venezuela this antivenom is applied to the bite of certain rattlesnake (Genus crotalus) species and Bothrops (mapanare/velvet/tiger butterfly), which are the snakes behind most of the snakebite incidents. It is estimated that between 5,000 and 7,000 snakebite accidents take place annually in Venezuela.

What happens when a snake bites?
Rattlesnake venom is highly neurotoxic, attacking the central nervous system, causing paralysis and respiratory arrest. In the case of the mapanare snakes, the toxic substance is proteolytic, hemolytic and coagulant; it breaks down tissues, destroys blood cells and generates necrosis.

According to Contreras, due to a natural and evolutionary condition of snakes, their poisons are constantly being modified in their natural habitat, so it is necessary for the serpentariums to constantly renew their snake collection.

Does Venezuela manufacture all its antivenoms?
Venezuela does not produce an antidote for the coralillo or the pineapple cuaima (Lachesis muta) as its geographical distribution is limited to very remote areas and the number of snakebite occurrences does not warrant the production of these antivenoms.

Given the lack of these antidotes, Contreras explains that the Ministry of Science and Technology and IDEA consider that “the possibility of an encounter between people and this type of animals should not be underestimated.” Consequently, they are working on the development of new, much cheaper technologies to produce antivenoms that are “equal or more efficient [compared to existing antidote serums] and that can encompass a larger variety of snake species.”

Currently the IDEA serpentarium is undergoing the construction of a poison production laboratory, which would not only be used to make antidotes, but also to research on the pharmacological potential of the poisons.

So far, the researchers have successfully neutralized point fractions of scorpion venom that will be used to start the production of this antidote.

Regionalizing the poisons
Contreras, who also holds a degree in education, explains that the first part of the process focuses on the snakes and the poison they produce, because, thanks to them, the antidote drug is obtained. But, “the goal of this project is to try to regionalize the production of antivenoms, so that there is not just one single antivenom producer in the country,” as is currently the case.

For this to happen the state relies on universities. “If four or five were to produce antidotes for certain regions, costs would be lowered and this would guarantee that the greatest amount of poisons in Venezuela gets covered,” Contreras remarked.

Does the antivenom used have limitations?
According to a publication of the Institute of Tropical Medicine, polyvalent antivenom serum is produced by taking poison from snakes and inoculating it into horses, which produce antibodies to neutralize it. Blood is then extracted and the plasma is used.

Among the limitations for the conservation of this serum is the impossibility of maintaining a cold chain to preserve it. “Generally,” Contreras explains, “in the most remote places, where most accidents happen, sometimes they don’t have electricity, the power goes out for several hours, they don’t even have refrigerators.”

Although Contreras highlights the positive characteristics of the UCV-produced antivenom, which has shown efficacy even when the cold chain is broken, due to biotechnical regulations regarding its transportation, the serum cannot be taken to some places because of a lack of vehicles with refrigeration capacity.

How is the new antivenom being developed?
The antivenom developed at IDEA uses a IgY technology based on the use of avian antibodies (egg immunoglobulin or IgY).

The advantages of such an antidote are that it comes freeze-dried or dehydrated in powder form and does not need refrigeration. In addition, it causes fewer adverse effects when administered.

Moreover, since the serum is produced from eggs it can be produced in larger quantities. Chicken breeding is cheaper than horse breeding and it is more bioethical, since birds do not have to suffer bleeding to extract their plasma, unlike horses.

Do the hens suffer?
Hens, like horses, are also inoculated with doses of the poison; however, the antibodies are extracted from their eggs, which can later be consumed without any problems, and the bird can continue its life normally.

Where is this antidote drug produced?
A group of specialists leads the project at the Francisco de Miranda Experimental University. In the Technological Research Development Center of the university, there is a range of laboratories and qualified personnel who extract the immunoglobulins, prepare the drug, and package it.

The University also holds the chicken coops and the serpentarium.

How many people have been inoculated with the antidote?
The developed antivenom has already been used in 40 people who responded positively. Up to six months after initial administration, they have had no adverse immunoglobulin reactions.

The antivenom is currently in an evaluation phase with the support of the Ministry of Science and Technology and the National Institute of Hygiene, which is the regulatory body in pharmaceutical matters. Procedures and tests for its certification are currently being carried out.

Is there a registry of snakebite accidents?
Contreras affirms that work is currently being done to build an information management system in public hospitals to facilitate the work of registering people poisoned by snakes or scorpions.

Currently there are no epidemiological bulletins that compile the number of snakebite incidents in each of the states in Venezuela. “We know the number is high because the number of snakes is high, just like the neighboring countries, that are among the most biologically diverse regions on the planet,” Contreras opines.